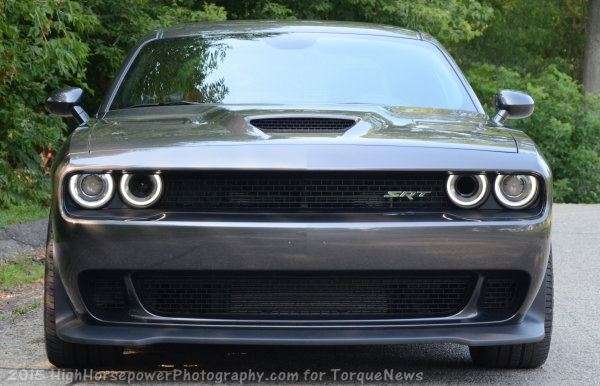 2016 Hellcat Challenger Still Leads in Premium Bang for the Buck

The 2016 Dodge Challenger SRT Hellcat costs a few grand more than 2015 model, but when compared to other American high performance cars and packages – the Hellcat Challenger still offers more bang for your buck than any of the American premium performance cars on sale this fall.
Advertisement

Before we get into the numbers, I want to address my method of qualifying the 2016 Dodge Challenger SRT Hellcat as the leader in premium performance price per horsepower. First, I made a list of all of the American rear wheel drive performance cars on sale this fall in every trimline, including the Ford Mustang, the 2015 Chevrolet Camaro, the 2016 Chevrolet Camaro, the Dodge Viper and, of course, the Dodge Challenger. This list included the base purchase price with destination and the official horsepower rating from the automaker. I then divided the price by the horsepower to get the price per horsepower. Yes, this is a crude method that doesn’t take into account anything other than price and horsepower levels, but when you are talking about bang for your buck – this is the simplest method.

Ultimately, the best deals in the American performance car segment are the base model 2015 Chevrolet Camaro V6 with a price of $24,700 and 323hp accounting for a ratio of 76.47 and the 2015 Ford Mustang GT, with 435 horsepower and an MSRP of just $33,295 accounting for a ratio of $76.54 per horsepower. The problem is that for someone considering the Hellcat Challenger with 707 horsepower and a price starting north of $60k to either of those cars isn’t a great comparison. Because of that, I am focusing on the higher performance models sold in the US – specifically the new Shelby GT350 Mustang, the 2015 Camaro ZL1 and Z28, the Corvette in Stingray and Z06 forms and the Viper. I also include the figures for the lower performance Mustangs, Camaros and Challengers for comparison’s sake.

Hellcat Challenger Price Per HP
The 2015 Dodge Challenger SRT Hellcat was incredible for a handful of reasons and one of them was the low purchase price. Before factoring in destination fees, the 707 horsepower Challenger started just under $60k and with destination, the base price sat at $60,990. This made the Hellcat Challenger the least expensive 700+ horsepower car in the world, helping to cause the feeding frenzy that has been the purchasing process for the most powerful muscle car ever.

That starting price of $60,990 gave the 2015 Hellcat Challenger a price per HP figure of $86.26 while the next most powerful car in the world – the Lamborghini Aventador – has a price per HP figure of $576.08. That isn’t a misprint…the Lamborghini has 690 horsepower and an MSRP of $397,500 and while prices on the 700+ horsepower list vary, they are all more like the Lambo than the Challenger.

Since the low price was part of the reason why the Hellcat Challenger was so special, some people were especially bothered when the higher prices were announced for the 2016 model year, but when we do the math, the 2016 Challenger SRT Hellcat is still the best bargain in the premium performance segment.

The closest competitor in the muscle car segment is the 2015 Camaro ZL1, with a supercharged V8 pumping out 580 horsepower and a price of $56,500 giving the blown Chevy a price per HP figure of 97.41. The road-gripping Camaro Z28’s is the most expensive American performance car at $145.15 per HP and the new Ford Shelby GT350 Mustang that will compete with the Camaro Z28 costs just $92.57, making it the closest competitor for the Hellcat Challenger in terms of price per HP, although with 526hp, the new Shelby won’t stand a chance against the mighty Mopar in a straight line. The road course will be a whole different story, but that doesn’t matter in a bang for your buck comparison.

The closest competitor to the Hellcat Challenger in terms of power is the Corvette Z06, which costs $123.68 per HP while the Stingray runs you $123.94 per HP. Finally, the Dodge Viper is the most expensive next to the Camaro Z28, costing $138.12 per horsepower unit.

Hellcat Compared to Lower Performance Muscle Cars
As mentioned at the top of this piece, the 2015 Camaro V6 offers the best bang for your buck, but that model is in its final days, leaving the Ford Mustang GT as the king of bang for your buck with a cost of just $76.54 per HP. The 2016 Camaro base model with the turbocharged 4-cylinder engine will have a price of $97.07 per horsepower while the new Camaro SS will have a pleasantly surprising cost of $81.97 per HP.

So, while the extra couple thousand added to the 2016 Hellcat Challenger base price is as much of a bummer as any price increase, buyers can rest easy knowing that they still got a smokin’ hot deal when it comes to price per horsepower.

gammagoat wrote on October 20, 2015 - 8:58pm Permalink
What has happened to the ram designers? Are they all loosing it? They can't build a truck with less than 4 doors?
Larry wrote on December 20, 2015 - 9:37am Permalink
I just purchased a Challenger Hell Cat SRT. It is an outstanding unreal car. Wished I had this mean machine in high school. The minute you push that start button your sold. Outstanding performance and sounds unreal. Dodge did it right and I love it. Everyone should have one and I can't say enough about my Hellcat. DRIVE ON!
Chris Braden wrote on May 10, 2016 - 6:23pm Permalink
Bought a 2016 Challenger Hellcat with MSRP of $70,175. It is a 6-speed manual, PCP, with sunroof, black hood and brass monkey wheels. The sunroof ($1995), black hood ($1995) and brass monkey wheels ($995) added almost $5000 to the MSRP and are options I could have lived without. But what can I say? Really nothing. I'm lucky to have been able to locate one at MSRP, let alone a PCP without an upcharge for color. You can't have everything.