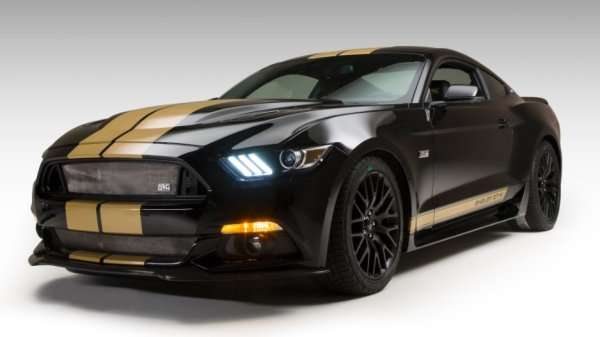 A new 2016 Ford Shelby Mustang GT-H will debut this week at the 2016 New York International Auto Show and this new Rent-A-Racer will help celebrate the 50th anniversary of the first Shelby Mustang offered through Hertz rental cars – with 140 of these cars headed to rental outlets around the US later this year.
Advertisement

Back in 1966, the Ford Shelby GT350-H Mustang was available on Hertz rental lots around the country as part of the very first Rent-A-Racer program. Ford, Shelby and Hertz have teamed up many times over the past 50 years, and with the 2016 Mustang on sale now, it has been 50 years since that first Hertz Shelby Mustang. To celebrate this anniversary, Ford and Shelby have teamed up again to build a Hertz Mustang that is likely the best performance Rent-A-Racer of all time.

Sadly, Ford hasn’t built the wicked new GT350 Shelby Mustangs to rental car spec, but even with the 2016 Shelby GT-H “only” being based on the 2016 Mustang GT – it should still be the most exhilarating Hertz Shelby Mustang in the 50 year history.

“The1966 Ford Shelby GT350-H became a legend from the moment it was introduced,” said Joe Conway Co-CEO of Carroll Shelby International and CEO of Shelby American. “Ten years ago, the 2006 Ford Shelby GT-H earned the same ‘rock star’ status when it was introduced at the New York Auto Show. We worked closely with Ford Performance to make the 2016 Shelby GT-H the most exciting Mustang ever to wear the iconic Hertz black and gold livery.”

2016 Ford Shelby Mustang GT-H
The 2016 Ford Shelby Mustang GT-H starts off as a black 2016 Ford Mustang GT with the 5.0L V8 and the 6-speed automatic transmission. The Shelby GT-H package starts by adding the Ford Performance Handling Pack, a Ford Performance catback exhaust system with chrome tips and matte black 19 inch wheels with Michelin Pilot Sport tires – all of which improve the handling capabilities of the modern muscle car.

Next up, the 2016 Ford Shelby Mustang GT-H takes on an aggressive appearance package, including a carbon fiber front splitter, a new vented hood, a unique upper and lower grille design, new side sills with carbon fiber trim, a new rear spoiler, the familiar body length gold stripes and all sorts of Ford, Shelby and Hertz badging.

Finally, the interior of the 2016 Shelby Hertz Mustang gets unique headrests, a dash plaque, sill plates and floor mats while the engine bay is dressed up with a GT-H engine plaque and engine cap kit.

The new Shelby Mustang Rent-A-Racer will debut later this week in New York and the 140 2016 Shelby GT-H Mustangs will be available starting on Memorial Day at select Hertz locations around the country where the Adrenaline Collection is offered. Pricing has not been announced, but I expect that it won’t be cheap. It will, however, be one of the most entertaining rental cars that you will ever have.