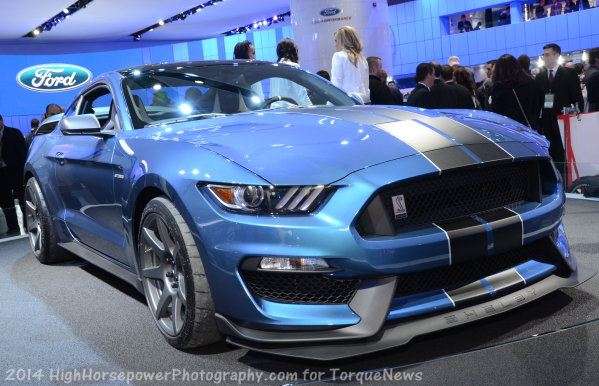 The folks at Mustang6g.com have once again dug up some awesome information on the new Shelby GT350 Mustang lineup, this time posting the internal order guide and filling us all in on just about everything that we could want to know about the features of the GT350 and GT350R.
Advertisement

Ford Motor Company has happily offered up all sorts of information on the new Shelby Mustang lineup, with the GT350 debuting late last year in LA and the GT350R debuting this week in Detroit. We know about all of the working components – from the MagnaRide damper system to the massive Brembo brakes to the new 5.2L flat plane V8 enigne. However, Ford hasn’t laid out all of the standard features so until now we have been guessing as to what kinds of options and option packages might be offered on the highest performance S550 Mustang fastbacks.

Today, the guessing ends, as Mustang6g.com has posted the dealership order guide for the 2016 Ford Shelby GT350 and GT350R Mustang, doing Ford the favor of letting us know what comes with each of these high performance pony car packages. It should be noted that while this information says that it is a 2015 model year vehicle, it is expected that the new Shelby Mustang will actually arrive for the 2016 model year.

The Differences Between the Shelby GT350 and GT350R
There are a great many similarities between the GT350 and GT350R Shelby Mustangs, but the R package features a long list of components that should make it far more track capable.

First, the GT350R come standard with the components of the optional GT350 Track Package. This includes the MagnaRide dampers with selectable drive modes, heavy duty front springs, fluid coolers for the engine, transmission and rear differential and a lightweight strut tower brace. Again, those components can all be added to the GT350, but they are standard equipment on the GT350R Mustang.

Next, the 2016 Shelby GT350R Mustang wears unique 19 inch carbon fiber wheels wrapped in Michelin Pilot Sport Cup 2 tires and behind those lightweight rollers is a massive Brembo carbon ceramic braking setup that should get this lightweight pony car stopped in a big hurry. The GT350R also has unique chassis tuning, body upgrades including the front chin splitter and the huge rear wing and an aluminum bumper beam.

Finally, to get the weight down as much as possible, the Shelby GT350R Mustang package deletes the rear seat, the air conditioning, floor mats, the tire inflator kit and the entire audio system. However, GT350R owners who want a seven speaker sound system with navigation can opt for the R Package Technology Package so that they can find their way to the track and listen to the radio while there.

The GT350 Mustang Option Packages
As mentioned above, those 2016 Ford Shelby GT350 Mustang buyers who want more performance can add the Track Package to get many of the working components of the GT350R. There is also a technology package, which adds the MagnaRide dampers, the heavy duty front springs, navigation, heater leather front seats, a seven speaker audio system, dual zone climate control, selectable drive modes and turn signal mirrors. It should be noted that you cannot get the GT350 with the Track Package and the Technology Package, but you do get a few of the go-fast goodies from the Track Package in the Technology Package.

Colors and Stripes
While there really aren’t a great many options for the 2016 Ford Shelby GT350 and GT350R Mustang fastback, there is a nice spread of exterior colors and stripe packages that allow owners to customize the Shelby Mustang a bit. GT350 buyers can pick from Competition Orange, Avalanche Gray, Shadow Black, Triple Yellow, Deep Impact Blue, Magnetic, Race Red and Oxford White while the GT350R is available in all of those colors except for Competition Orange and Triple Yellow. Depending on the exterior color chosen, GT350 buyers can pick a stripe package in Black/White accents, White/Black accents and Blue/Black accents while the GT350R comes with White/Red accents, Blue/Red accents and Black/Red accents.

Questions on the Shelby GT350 and GT350R
Now that the order guide for the 2016 Ford Shelby GT350 and GT350R Mustang has hit the internet, there aren’t a whole lot of key points on the new super-Stangs that haven’t been announced. However, we still don’t know exactly how much power the new 5.2L flat plane V8 will make, nor do we know what kind of fuel economy numbers we can expect from the 2016 Shelby Mustang. Fortunately, no one cares how many miles per gallon the next generation Shelby Mustang will offer and in terms of power, we continue to look hopefully to Ford to clarify the exact figures after the company promised at least 500 horsepower and at least 400lb-ft of torque.

With the 2016 Ford Shelby GT350 and GT350R Mustangs expected to arrive in dealerships later this year, we are likely to get full power figures over the course of the next few months – possibly at the New York International Auto Show in April.