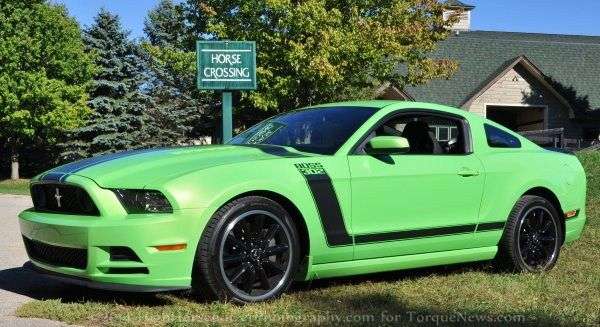 Ford has done a remarkable job of protecting the details of the next generation high performance Mustang so while we don’t even know for sure what it will be called – be it the Shelby GT350 or the new SVT Cobra – I expect a high powered Mustang that is more like the previous Boss 302 than the previous Shelby GT500.
Advertisement

Since there has been no official information on the highest performance S550 Mustang and most of the rumors indicate that it will be called the 2016 Ford Shelby GT350 Mustang, we will assume that those rumors are correct for the sake of this discussion. If you are reading this, you surely know that the current highest performance Ford Mustang is the Shelby GT500 and it seems odd to seemingly go in reverse in terms of the numeric naming process. However, when you consider what an absolute beast the 2014 GT500 is with a supercharged 5.8L V8 packing 662 horsepower and 631lb-ft of torque – it is clearly going to be very hard for the next generation super-Stang to overpower the current GT500.

Because of that, I expect that the 2016 Ford Shelby GT350 Mustang will be a great deal more like the Boss 302 and the original 1965 Shelby GT350 than it is like the current Shelby GT500. While the 2014 GT500 is a proud and proper Mustang, the Shelby models are vastly different from the Mustang GT. The drivetrain options are different (including the monster motor), the interior is different, the body looks different and it costs a whole lot more.

On the other hand, both the recent Boss 302 and the original Shelby GT350 back in 1965 were more closely based on the Mustang GT with modified versions of the GT engine, revamped versions of the GT look and a cabin that was very much a lightened up example of the “normal” production Mustang models.

Where the 2014 Ford Shelby GT500 Mustang is really a whole model of its own, the modern Boss 302 Mustang and the original Shelby GT350 were truly high performance versions of the Mustang GT that added a little power – but focused on other aspects like serious weight reduction and improved handling capabilities. With the popularity of the modern Boss 302 Mustang combined with what would be a difficult task of going out and beating the 662hp GT500, making a GT350 that is less powerful than the old Shelby models while being more powerful and better handling than the Mustang GT seems to make perfect sense.

What I am expecting from the 2016 Ford Shelby GT350 Mustang is a car that is more closely based on the 2015 Mustang GT. On the outside, I expect to see some more aggressive front and rear fascias, a unique hood, perhaps a unique grille treatment and package specific wheels. On the inside, this new Shelby model should feature a set of high performance Recaro race seats and all of the high tech go fast goodies of the Mustang GT with some unique badging and maybe even a rear seat delete.

Finally, and most importantly, I expect that the S550 Shelby Mustang will be powered by the same 5.0L V8 that powers the Mustang GT, except it will be tuned to make significantly more power than the higher volume GT package. This could include forced induction that could take the power well into the high 500 range and maybe even into the 600s, but I don’t expect that the new GT350 (if that is what it is called) will challenge the output of the current GT500.

At the same time, I expect that the 2016 Shelby GT350 will include an adjustable race-ready suspension system that will make this new high end Mustang the most track capable of all time, defeating the previous Boss 302 by a significant amount. With a combination of a high tech damper system, a monster brake system, some unique chassis bracing and special package specific tuning to the electronic stability control, the 2016 Shelby GT350 should be the best handling Mustang of all time while still having enough power to outrun anything from General Motors in a straight line. It will essentially be the next generation of the Boss 302 in terms of the performance goals, but it will do so with much bigger power than the previous Boss.

That is my guess, anyways.