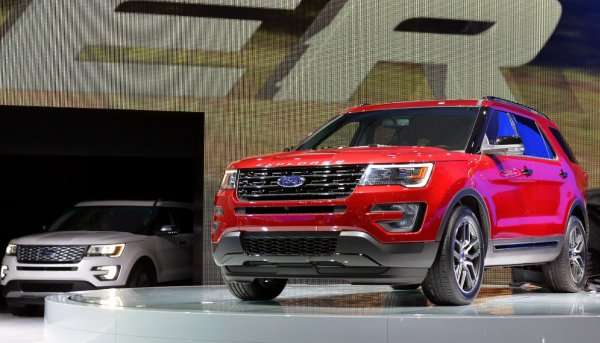 The 2016 Ford Explorer is on display now at the 2014 Los Angeles Auto Show with a sleek new exterior design, a new premium trimline and a new midrange engine in the form of the 2.3L EcoBoost 4-cylinder that is featured in the 2015 Ford Mustang.
Advertisement

The Ford Explorer is one of the most popular sport utility vehicles sold in American and it has been since its introduction for the 1991 model year. The current generation Explorer caught some flack from traditionalists for its unibody design, but it has still continued to be among the most popular models in the segment.

Ford looks to continue that success with the refreshed 2016 Ford Explorer that introduces a new front and rear end design, a new premium luxury trimline and a new midrange engine that has been borrowed from the 2015 Ford Mustang EcoBoost.

2016 Ford Explorer Exterior Design
First up, the most significant changes to the 2016 Ford Explorer are the exterior upgrades for the new model year. While the new Platinum trimline will allow the Explorer to compete with other high end SUVs and the new EcoBoost engine will help attract buyers who want better fuel economy and solid power, the exterior changes to apply to every person who buys a 2016 Explorer.

Overall, the 2016 Ford Explorer is the same basic shape as the 2015 Explorer that is in dealerships all over the country right now and if someone was to look at the 2016 model from the side, they might not notice anything that makes it different from the previous models. However, both the front and rear ends have been significantly altered for the 2016 model year and these changes take the entire model line a step upscale. The front end of the 2016 Ford Explorer is massively redesigned with sleek new LED trimmed headlights, a big, bold upper grille, LED driving lights and a front fascia that is easily among the sportiest on the market today. This front end has a collection of small options below the main grille, with plenty of air intake for engine cooling while still offering strong aerodynamics for improved fuel economy. A mix of matte black and silver balances the sporty and luxurious natures of the new Explorer, but overall this new front end is far more eye-catching than the outgoing models. Out back, there is a set of slightly sharpened LED taillights and a redesigned lower rear fascia area with integrated exhaust tips.

Really, from the side or back, someone might mistake the 2016 Ford Explorer for one of the previous model years, but the new front end is better in every way and it should go a long way in helping the Explorer to continue its sales success across the entire lineup.

New Platinum Trimline
The top of the line luxury package for the 2016 Ford Explorer is the new Platinum trimline. This package comes standard with the 3.5L EcoBoost V6, all-wheel drive, a 6-speed automatic transmission, 20 inch wheels, unique silver exterior accents, plush leather seats that Ford is calling the highest quality leather they have ever used and all of the infotainment bells and buzzers that you could want. This package should do a very good job of steering people away from the GMC Denali lineup – especially once prospective buyers have driven the new Explorer Platinum and the comparable Denali product. The Magnetic (grey) Explorer shown in the gallery above is a new Platinum model. Click any thumbnail above for more pictures.

New Mustang Engine
The standard engines for the 2016 Ford Explorer are the naturally aspired 3.5L V6 in the XLT and Limited trimlines and the 3.5L EcoBoost V6 in the Sport and Platinum models. The previous Explorer came with an optional 2.0L EcoBoost 4-cylinder, but that mill is gone, as it has been replaced by a specially tuned version of the 2.3L EcoBoost that is featured in the 2015 Mustang. In the new Explorer, this 2.3L EcoBoost engine is expected to deliver 270 horsepower and 300lb-ft of torque, making it quite a bit more powerful than the base model V6 (290hp, 255tq) while leaving plenty of room for the 3.5L EcoBoost (365hp, 350tq). Most importantly, in addition to being very powerful, this new EcoBoost 4-cylinder will be the most fuel efficient engine in the lineup, perhaps making the 2016 Explorer one of the most fuel friendly models in the segment. Also, unlike the previous 2.0L EcoBoost, the new 2.3L EcoBoost is available with all-wheel drive, just like the V6 engines.

The changes made to the 2016 Ford Explorer aren’t groundbreaking, but the new front end, the new premium trimline and the new fuel efficient EcoBoost engine should help Ford to keep moving enough large SUVs to be among the most popular in the USA.