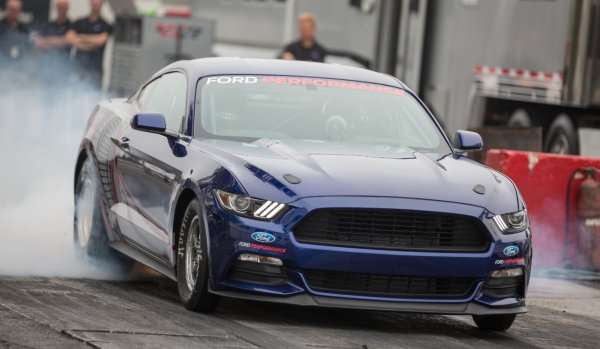 As expected, Ford Motor Company introduced the 2016 Ford Mustang Cobra Jet drag racing package at this week’s 2015 SEMA Show and along with the news of the certified 8 second quarter mile times comes an awesome video showing just a quick glimpse of the quickest Mustang ever in action.
Advertisement

The Ford Mustang Cobra Jet has done a fine job of representing the Motor Company in the world of super stock drag racing over the past decade and with the new generation of the Ford Mustang comes the new generation of the Ford Racing Cobra Jet. This limited edition beast isn’t street legal, but hardcore drag racers who want to go super stock racing in a new Mustang will find this to be the best choice on the market, with the ability to blast down the quarter mile in just 8 and a half seconds when properly driven.

The 2016 Cobra Jet Mustang
The 2016 Ford Racing Cobra Jet Mustang follows closely in the footsteps of the previous generation Cobra Jet cars, except like the production road cars, the 2016 model is improved in a variety of ways.

The heart of the beast is the same 5.0L V8 that powers the normal Mustang GT, with 75% of the components being identical to the road car. The biggest difference is the addition of a Whipple supercharger and while Ford doesn’t state the horsepower output, we know that it is enough power to put the new Cobra Jet solidly into the 8 second range. Of course, that comes with a hefty weight reduction effort, stripping away all of the interior bits that aren’t needed for racing and adding just some lightweight seats and a roll cage certified down to 8.50. There is also a specially prepared racing transmission, lightweight brakes, special wheels and tires, a high performance fuel system with a trunk mounted fuel cell and new for 2016 is a four link rear suspension setup that allows this Mustang to get monster traction when leaving the line.

Finally, there is the optional Cobra Jet graphics package which just looks incredible on the new generation Mustang body.

Only 50 examples of the 2016 Ford Racing Cobra Jet Mustang will be built and with a price tag of $99,900, they are comfortably the most expensive vehicle in the current Ford lineup – at least until the new GT hits. However, for someone who is serious about going drag racing at the major league levels, this car will put you into contention without anything more than tuning efforts and driving skill.

The Cobra Jet in Action
The video below is an expanded piece from the teaser video, showing us the 2016 Cobra Jet Mustang making a test run down the quarter mile. We get to hear the blown 5.0L V8 roar and we get to see the Mustang put a serious smokin’ to the Hoosier drag slicks, but most importantly, we get to see the new Mustang drag car tear away from the starting line with the wheels WAY up in the air. The wheelie bar package adds $1,995 to the bottom line, but considering how this Mustang would have stood on the back bumper is not for the bars – they might be a necessity for the guys looking to turn the quickest times.

Of course, this new Cobra Jet Mustang will go head to head with the new 2016 Chevrolet COPO Camaro drag car, which also debuted this week at the 2015 SEMA show. These cars will surely battle for records and class wins around the country.

Until then, crank up your speakers and enjoy this video of the 2016 Ford Racing Cobra Jet Mustang in action!