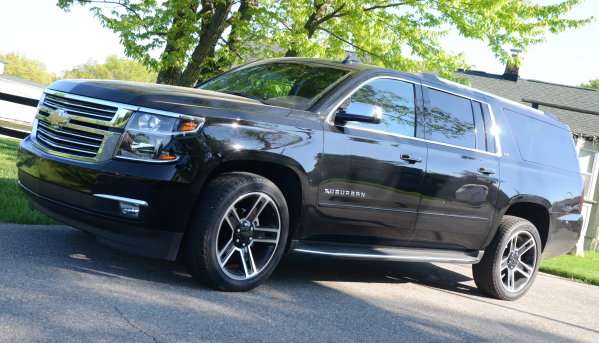 The Chevrolet Suburban is one of the oldest nameplates in the US market, dating back to the mid-1930s, and after spending a week driving the 2016 Suburban LTZ, there was little question why this full sized body-on-frame SUV has lasted all of these years – with more passenger space, more cargo space and more working abilities than any SUV sold in the USA.
Advertisement

While the Chevrolet Suburban might not be the bestselling sport utility vehicle in the market, it is the oldest and – in terms of the original American SUVs – it is the most like the vehicles which helped this segment boom. Unfortunately, the push for better fuel economy and lower purchase prices have lifted smaller, less powerful and less functional SUVs to the top of the sales charts.

The decline in popularity of big, truck-based SUVs has led to a near-extinction of the segment, but for those buyers who want a vehicle with the most passenger space, the most interior cargo space and truck-like working abilities from a single vehicle – the Chevrolet Suburban is the best option on the market.

The Suburban is one of the last big, hard-working SUVs which descended from the truck-based SUVs of the 1970s and like those old utes – the Suburban does just about everything well.

The Few Downsides
Before getting into all of the things that the 2016 Chevrolet Suburban LTZ does well, let’s address the downsides to this big, brawny SUV.

First and foremost, the Suburban LTZ with four wheel drive is what most people would call “very expensive”. My test truck had a base price of $67,310 and when you add on the 22 inch wheels at $2,955, the Sun/Entertainment package at $2,860, the $875 8” reconfigurable gauge cluster and the applicable destination fees, the sticker price sits at $74,735.

Yes, $75,000 is a great deal of money for something that isn’t a luxury car or a high performance vehicle, but when you consider the long list of features, the working abilities (cargo and towing) and the fact that it will comfortably seat four tall adults and two shorter adults/two kids – there aren’t many vehicles sold in the US that can compete…let alone compete for less money.

Second, the Suburban 4WD LTZ is a big, heavy vehicle with a powerful V8 engine which drives all four wheels, so it isn’t very fuel friendly. The EPA expects that the truck shown here will get 15mpg in the city, 22mpg on the highway and 18mpg combined. I only averaged around 16mpg, but that was because I spent over a hundred miles pulling my 5,000lb horse trailer. I did find that when cruising on the highway, the Suburban is capable of getting slightly better than the predicted 22mpg when driven carefully.

However, if you are really that concerned with fuel economy, this is not the vehicle for you.

Finally, as mentioned above, the Suburban is a big vehicle so it might not fit in your garage at home and it might not fit in the parking garage at work. If you regularly deal with a garage with low clearance, you are going to run into issues with this big SUV – but that is going to be true of all large vehicles like this.

Those are all of the “problems” with the Chevrolet Suburban, so provided that you don’t have unreal expectations about what you are going to pay for a vehicle of this size and provided that you care more about capabilities than fuel economy – the Suburban LTZ is hard not to love.

Now, for all of the things that the Suburban does so well.(More on Page 2)

Exterior Design
While opinions on exterior design vary from one person to the next, I like the look of the 2016 Chevrolet Suburban LTZ – especially with the addition of the black, 22 inch wheels – giving this big SUV the look of a secret service vehicle or a limo. As huge SUVs go, my Suburban test truck had a very sporty look, with just enough chrome from front to back to give it the luxury touch that you want from a $75k vehicle. Also, the standard side steps make it very easy for kids to get into this high riding SUV, so it looks great and it is easy to get in and out of for shorter individuals. A Big Luxury Interior
The Chevrolet Suburban is a big vehicle, which leads to a massive amount of interior space. My test truck had second row bucket seats so it “only” seated six, but even if all six of those people are adults, they will fit comfortably in the Suburban. The third row is a little tight for taller adults, but shorter adults and kids will have no issue finding space for their legs and for those folks seated in either of the front rows – space is ample in every dimension. Some automakers might have measurements which show that their cabins are more spacious, but in terms of real world, butt-in-seat testing, I’ve not been in an SUV with more real, useable seating space for six adults. Best of all, even with the third row seats occupied, there is still a large cargo area that is accessed via an equally large rear lift gate. This cargo area will easily fit large boxes, multiple hockey bags, multiple golf bags – you name it. When you fold down the third row, the Suburban has more interior cargo space than anything I’ve tested and when you fold up the second row – there is enough space for an adult to comfortably stretch out and lay down. In other words, you could go camping with the Suburban and not worry about a tent.(More on Page 3) From the driver’s seat, you can adjust the information in the gauge cluster and the sound system with the controls on the steering wheel, while using the voice button to access the hands-free phone system or the navigation program. You can also use the touch screen or the buttons located below the touchscreen, so this is a system that has the high tech controls – but you’re never forced to use them if you prefer traditional buttons and knobs. The 2016 Chevrolet Suburban LTZ has interior space for six adults with a great sound system, an entertainment system for those seated in the back, tons of cargo space and one of the best infotainment systems on the market. This interior could be rebadged and placed into a Cadillac, and it wouldn’t seem out of place – the Suburban LTZ is that well-appointed.

The Drive
The 2016 Chevrolet Suburban LTZ 4WD is powered by a 5.3L V8 that delivers 355 horsepower and 383lb-ft of torque to all four wheels via a 6-speed automatic transmission. Having previous driven the Escalade (a similar GM vehicle) with the 6.2L V8, I miss the extra power, but the 5.3L V8 does a great job of powering the Suburban. Around town, the Suburban pulls well from a stop and while it might not be the quickest big SUV on the market – it never feels underpowered. On the highway, this smaller V8 has no issues keeping the big Suburban up to speed and when the need arises to put the hammer down and pass slower-moving traffic, this engine is up to the task.(More on Page 4) The 5.3L engine makes the Suburban as powerful as it needs to be, although I would love this big SUV even more if it shared the 6.2L engine from the Cadillac Escalade and the GMC Yukon Denali.

On top of making the Suburban fairly quick around town, the 5.3L V8 allows the big Chevy SUV to tow as well as most full size trucks. I pulled my 5,000lb horse trailer (the same that I tow with every applicable test vehicle) and the Suburban pulled the trailer well. The biggest difference from the Suburban with the 5.3L to the other GM SUVs with the 6.2L mill is on the highway, as the smaller engine has to work a little harder to maintain highway speeds on long hill climbs and such. The low end acceleration difference is negligible, since I never accelerate hard with horses loaded up, but I did find myself “asking” the 5.3L to work a little harder on the long highway drive than the GM SUVs with the bigger engine.

That being said, the Suburban still pulled the trailer very well and I wouldn’t hesitate to recommend the big Chevy SUV to anyone looking to tow a 2-horse trailer regularly. During acceleration, handling and braking exercises, the Suburban performed every bit as well as the half ton trucks I’ve tested – and working ability like that is getting harder and harder to find in the SUV segment. Finally, one area where the Chevrolet Suburban shines when compared to full size trucks and other large SUVs is in ride quality. The Suburban LTZ features GM’s Magnetic Ride Control suspension system, which constantly monitors the motion of the vehicle and adapts based on what the suspension needs to be doing. When you are cruising on a nice, smooth highway, the suspension softens to offer the smoothest ride possible, but when you leave the highway to travel down a tight, twisting road – the suspension stiffens up to improve handling. This high tech system allows the Suburban to offer a smooth ride in most conditions, but a stiffer ride when you are towing, hauling or cutting through the curves. Many larger SUVs are either too stiff for those people who expect a smooth ride or too soft for those who want a big SUV that doesn’t float like a boat in the curves, but this big Chevy avoids both of those issues.

In most situations, the Chevrolet Suburban LTZ drives like a truck because it is based on a truck and I consider that to be a very good thing. The Suburban performs well when loaded with people or when hooked to a 5,000lb trailer, and thanks to the magnetic suspension, it is surprisingly smooth in those circumstances where you would want a smooth ride. The 5.3L engine is fuel-friendly as V8s go and it makes this large SUV surprisingly quick and predictably strong.

If you want a big SUV that can work like a truck, but which rides far smoother than most trucks, the Suburban is ideal.

The Final Word
The 2016 Chevrolet Suburban LTZ costs so much because it does so much – more than pretty much every other SUV sold in North America. The Suburban has more interior space than any other SUV on the market and the cabin is chock full of all of the modern nicities that you would want from a premium vehicle. Finally, although you wouldn’t want to fill the cargo area with gravel, the rear lift gate allows access to as much cargo space as you get with most pickup trucks while also pulling my horse trailer just like the trucks.(More on Page 5)

Most automakers have gone away from truck-based large SUVs, so if you want a large vehicle that will accommodate six adults with plenty of cargo and tow like a full size truck – all while offering all of the expected modern amenities – the 2016 Chevrolet Suburban LTZ is the best choice on the market for the money.