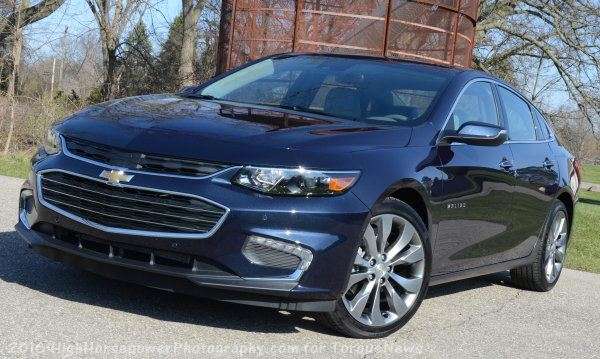 I recently had a chance to spend a week behind the wheel of the 2016 Chevrolet Malibu Premier and after logging hundreds of miles on this turbocharged midsize sedan – I can confidently state that the newest generation of the Malibu is the best yet while also being one of the more interesting cars in a very popular segment.
Advertisement

The Chevrolet Malibu competes in the midsized sedan segment with some of the most popular cars in America, including the Toyota Camry, the Honda Accord, the Ford Fusion and the Nissan Altima. This is a segment is often accusing of being too “vanilla” or too much like rolling appliances because, at one point not all that long ago, the most popular cars in the segment were all fairly boring. Within the past decade, having the popular midsized car meant little more than a car that was affordable, efficient and roomy inside while little attention was paid to luxuries, exterior styling or fun to drive factor.

For many years, the midsized sedan segment was populated by buyers who didn’t care much about their new car looking sporty of being exciting to drive, but that has changed completely in the past few years. Midsized sedans from every automaker have gotten to be more luxurious inside, sportier on the outside and more fun to drive – and the 2016 Chevrolet Malibu Premier is the latest vehicle to storm into the sportier, more exciting era of the midsized sedan.

The Exterior
Although General Motors has been gradually making the Chevrolet Malibu a bit more aerodynamic over the past three generations (2004-2015), the Malibu was one of the last cars in the midsized segment to make the shift away from the boxier sedan form. The 2016 Malibu has a far sleeker exterior form, with a long roofline and gently sloping back glass, this new sedan adopts the popular fastback form with a far more modern looking face and much curvier side lines. Really, the Malibu looks more like the Impala, only smaller, and that leads to the best looking of the modern midsized sedans from Chevrolet. Up front, the big, squared headlights housings are gone and in their place is a set of thin, streamlined headlights with chrome trim that extends through the slim upper grille area. Like the rest of the modern Chevy cars, the 2016 Malibu has a slim upper grille and large lower grille, creating a sporty, angular look while the splash of chrome with the LED driving lights add a touch of luxury. The hood stretches down to meet the angry-looking front end with sharp styling lines giving the new Malibu a very aero-friendly look and the front end flows around to the sides, where the lines meet the aggressively designed 19” aluminum wheels.

The sporty direction established by the front end is accentuated when viewing the 2016 Malibu from the side, thanks to the long, sloping roofline that encompasses the rear window on its way to the contoured trunk lid. This new Malibu is, for lack of a better term, a fastback sedan and with thanks to the curvy side lines and the sporty front end, I really like the exterior design of this midsized Chevy. Without question, this is my favorite look for the Malibu since it was introduced as a front wheel drive sedan back in 1997. Whether you prefer your sedans luxurious or sporty – I can’t imagine that there are many people who can look at this car and the Malibu sedans from the past decade and suggest that this isn’t the best looking car to wear the name in many moons. This new Malibu design is sleek, sporty and classy, making it a major part of the rebirth of this popular Chevy sedan.

The Interior
The exterior of the 2016 Chevrolet Malibu Premier is a little sporty and a little luxurious, but the interior is all about affordable luxury. My Malibu Premier test car was fitted with the leathered-up Dark Atmosphere (that’s brown, FYI) and Medium Ash Gray package, featuring darker brown on the dash, the steering wheel, the top and bottom of the door panels and along the sides of the center console down to the carpeting while the leather seats, the middle of the door panels, the middle of the dash and the headliner were the lighter gray. When you add a splash of silver accents across the dash and down along the shifter area, this two-tone cabin has a very high end look even before we get into the infotainment goodies.

Speaking of infotainment, the 2016 Chevrolet Malibu Premier comes standard with the MyLink audio system, featuring an 8 inch touch screen, navigation, AM/FM/satellite radio, auxiliary input, Apple Car Play, 4G WiFi hotspot connectivity and, of course, the hands free Bluetooth phone system. The MyLink system is easily controlled through the big, bright touchscreen mounted high enough on the dash that the driver doesn’t need to look far from the road when checking out the navigation map or the radio station. The touchscreen system is very user friendly, but for those who prefer buttons and knobs, the infotainment system also includes a traditional controls just below the screen as well as an array of buttons on the steering wheel. With the use of the steering wheel controls including the voice control system (which is accessed via a button on the steering wheel), the driver can adjust the navigation or the sound system while driving without removing his or her hands from the wheel. The gauge cluster of the 2016 Malibu Premier isn’t quite as high tech as some of GM’s pricier vehicles, but the analog speedometer, tachometer, fuel gauge and temperature gauge are joined by a large driver information screen which is also controlled from the steering wheel buttons – including information on the vehicle fuel economy, the infotainment system, navigation and vehicle settings. As you might expect, the Premier package comes with a passive entry system (doors unlock when you reach for the handle with the key fob in your pocket), push button start and all of the modern safety gadgets such as adaptive cruise control, collision alert, rear cross traffic detection and lane-keep assist. The adaptive cruise control does a great jo of monitoring the speed of the vehicles around you on a long highway drive and the lane keep assist works beautifully – stopping just short of doing the driving for you when driving on a long, straight road. Finally, and the 2016 Chevrolet Malibu has a surprisingly spacious cabin, with lots of leg room and head room for taller rear riders. Some midsized sedans open up front seating space by cutting into the rear legroom, but the new Malibu can comfortably seat four adults without crushing anyone’s legs. Also, the angle of the rear seats and the longer roofline gives taller rear riders more space over their heads – so while this sedan is best suited for a family of four, it will easily accommodate four adults on a daily commute.

The 2016 Chevrolet Malibu Premier is the top of the line trimline and it shows throughout the cabin, with plush leather seats, a premium infotainment system and plenty of space for adults in all four key seating positions. Most importantly, this package has a starting price of just $30,920 and even when you add on the available Driver Confidence 1 and 2 packages as well as destination and fees – the price as tested sits at just $34,285.

The Drive
The 2016 Chevrolet Malibu Premier is powered by a 2.0L turbocharged 4-cylinder engine which sends 250 horsepower and 260lb-ft of torque to the front wheels via an 8-speed automatic transmission. This drivetrain is expected to return fuel economy figures of 22mpg around town, 33mpg on the highway and 26mpg combined – all of which I found to be very reasonable figures. I let all 250 horses stretch their legs and I was still able to average 26.3mpg over the course of my 8-day test session, so I believe that someone with a lighter foot will be able to comfortably beat those EPA figures, especially if they spend a great deal of their drive time on the highway. In addition to making the 2016 Malibu Premier fuel-friendly, this 2.0L turbocharged engine makes the new midsized sedan surprisingly quick in most driving situations. From a stop, the Malibu climbs to speed in a big hurry, without any noticeable lag from the compact turbocharger and while the 8-speed automatic transmission allows the engine to run at very low RPM when cruising on the highway – thus having the capability to get better than 30mpg on the highway – it also affords the new Chevy sedan impressive acceleration through both the low-end and the midrange. In other words, as quick as the 2016 Malibu is to climb from 0-60, it is just as willing to climb from a cruising speed to much higher speeds by putting the pedal to the floor. Now, I’m not suggesting that you should buy the 2016 Malibu with the plan of dominating your local racing scene, but in comparison to past Malibu sedans and many of the other cars in the segment, this new turbocharged Malibu is quicker and more fun to drive.

Along those same lines, the new Malibu combines this fun to drive factor with the kind of ride quality that you would expect from a car intended for the rigors of daily driving. The steering is responsive and the suspension setup allows you to cut through the corners with confidence, but GM has achieved these qualities while maintaining a smooth, quiet ride – even on Metro Detroit’s rough highways. The interior is whisper quiet around town, with very little of the road noise making into the cabin and even when storming down the highway, the interior noise is minimal, both in road noise and wind noise. The 2016 Chevrolet Malibu Premier isn’t marketed as a sport sedan, but with turbocharged engine, the steering system and the suspension setup do a great job of making this efficient midsized sedan comfortable enough for everyday driving or a cross-country trip, but it also possess all of the qualities that make a midsized sedan fun to drive – all while offering better than 33mpg on the highway.

The Final Word
The 2016 Chevrolet Malibu is better than the outgoing model in every way, with the most attractive exterior styling of the modern era Malibu sedans, a loaded interior with very little left to want and a turbocharged engine that makes this midsized sedan fun to drive and surprisingly efficient. When you consider the fact that this car with all of the features mentioned above has an MSRP under $35k, the 2016 Malibu Premier really is an impressive car for the money.

The Malibu has long been one of Chevrolet’s best-selling cars and with the striking new design of this 2016 version, I expect this midsized sedan to continue to grow in popularity. No longer can the Malibu be accused of being too vanilla, as the sporty exterior, the plush interior and the turbocharged engine make it fun to drive, comfortable to ride in and easy on the eyes.

In a segment where looking sporty, being fun to drive and offering lots of interior amenities have all grown to play a big part in a vehicle’s popularity – the 2016 Chevrolet Malibu Premier checks every box.