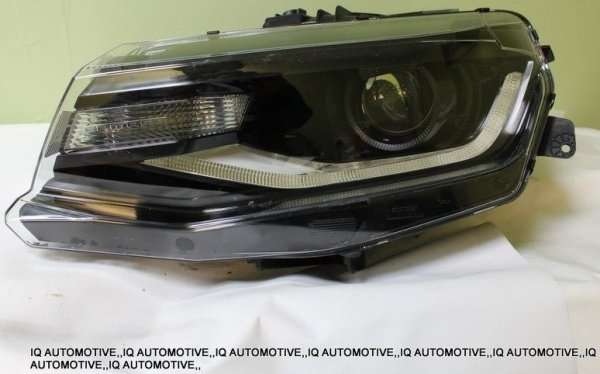 We haven’t seen the 2016 Chevrolet Camaro in anything other than spy shots thus far, but it looks like one of the driver’s side headlights has already shown up as used on eBay.com – which leads to a great many questions about this very unusual situation.
Advertisement

While there have been a great many renderings of the 2016 Chevrolet Camaro – some of which I expect could be very accurate – General Motors has not offered up any actual images of the 6th gen muscle car. There was a shadowy side profile shot of what we believe is the next gen Camaro during a video presentation at the Detroit Auto Show, but other than that, GM has been very quiet on their newest performance car.

With all of that in mind, it seems very unlikely that used parts of the 2016 Chevrolet Camaro would turn up on eBay, but that seems to be exactly what happened recently. A listing for a 2015 Camaro headlight is clearly not a 2015 Camaro headlight, but it looks an awful lot like the headlights that many of the people who created the 6th gen Camaro renderings depicted up front. When combined with the shape of the headlights in spy shots, it really looks as though this person was selling headlights for the 2016 Camaro.

Is This a 2016 Camaro Headlight?
I should start by pointing out that this might not be a headlight for a 2016 Chevrolet Camaro, but there are quite a few aspects of this eBay listing that lead us to believe that, somehow, this person was selling headlights from the next gen Camaro. First and foremost, the word “Camaro” is etched into part of the housing and second, one of the listing images shows the code A1BC, which is the internal code for the next gen Camaro project. While the spy shots and renderings only mean so much, this headlight does look like it could fit the 2016 Camaro front end and most notably, this headlight most certainly would not fit in a current Camaro front fascia.

It says Camaro, it has a Camaro code on the back and it won’t fit in any Camaro we have ever seen on our local dealership showroom floor. In theory, it has to either be the 2016 Camaro headlight, or it is literally nothing more than a hoax.

How Would the Seller Get a 2016 Camaro Headlight?
The seller of what looks like a 2016 Chevrolet Camaro headlight is listed as being in Ypsilanti, Michigan, so there are a few ways that this person could have acquired a headlight from a car that doesn’t yet exist. Ypsilanti is in the Metro Detroit area and this area is riddled with companies that produce components for the automakers. These companies make production parts and they produce concept parts, so there is a chance that these headlights were taken out of the trash of someone company that was trying to build Camaro headlights for GM. These could be prototype headlights that were rejected and if that proves to be the case, the exterior shape might be accurate (since this would have needed to fit into the 2016 Camaro front end), but the interior design could be different from what we see on the production model once debuted.

There is also the possibility that the seller somehow got these headlights out of a General Motors facility and if that was the case, this could be an actual driver’s side headlight for the 2016 Camaro.

Unfortunately, we aren’t likely to find out if this is a real 2016 Camaro headlight until after the new car debuts – hopefully as soon as April when the New York Auto Show opens in the Big Apple.

Do you think that this is the 2016 Camaro headlight? Tell us in the comment section below!

Don wrote on February 25, 2015 - 2:37pm Permalink
I think it's part of a clever guerrilla marketing program and you should be getting paid to help them promote it.

Elon Makes a Cybertruck Statement With an Action, But Quiet in Words
Tesla's Record Month in China: Doubled Registrations in March 2021
END_OF_DOCUMENT_TOKEN_TO_BE_REPLACED