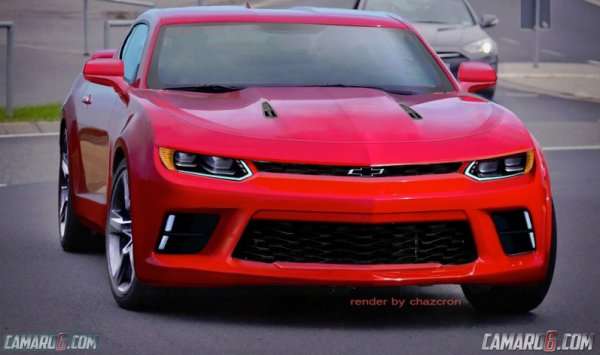 The 2016 Chevrolet Camaro by chazcron Looks Just About Perfect

Our latest look at the 2016 Chevrolet Camaro comes from automotive artist chazcron and while we have seen some excellent artwork depicting the next generation Camaro – this work might just be the most accurate in predicting what the new Chevy muscle car will look like when it hits the street.
Advertisement

The 2016 Chevrolet Camaro shown above is not an actual picture of the car in the flesh, but rather an incredible rendering by the automotive artist chazcron. If the name chazcron sounds familiar to any regular TorqueNews readers, you likely remember the renderings that he did of the 2015 Ford Mustang before it debuted. By clicking here to see his 2015 Mustang work from October 2013, you can see that he was very, very accurate back then so I suspect that his work on the 2016 Chevrolet Camaro could be spot-on. Seriously, check out the Mustang link and consider how close that artwork is to the actual 2015 Mustang. It is crazy how well he used spyshots and videos to predict what the 2015 Mustang would look like and for the 2016 Camaro, he has used the same techniques.

The chazcron Method
The problem with many of the renderings that we have seen of the 2016 Chevrolet Camaro is that they are largely based on images of the current Camaro, with changes made to reflect what the artist believes will be different about the new models. In some cases, artists have also used 2nd generation models and cues from 4th generation models to design their 6th gen Camaro – none of which looked like something that GM would actually build. However, the chazcron 2016 Camaro images are so well done and so realistic looking – it is like he snapped these pictures of the car.

The way that he created his gorgeous 2016 Chevrolet Camaro renderings is by using photoshop to alter spyshots. Using what he has seen from all of the spy shots and videos floating around the internet, chazcron has modified spyshots to look like a production model – most notably removing the black and white camo to reveal the body lines.

The chazcron image above comes from Camaro6.com, where he has also posted GIFs showing the spyshot transforming into his version of the new Camaro. Bringing the process to life really helps you see how he designed his 2016 Camaro from front to back. While we have posted the front end image of the new Camaro here, Camaro6.com has a ton more pictures showing his work, including GIFs that essentially defend his opinion of what to expect from the new muscle car.

The Key Possible Differences
While I believe very strongly that the vast majority of the lines of the chazcron 2016 Camaro are accurate, there are a few key areas where he had to make some guesses as to what the 6th gen Camaro might look like.

Most notably are the headlights and the taillights of the 2016 Camaro – both of which are always either well obstructed in camo or the test cars literally use odd mockup lights that are nothing like what is featured on a production model. For instance, the headlights in the front end spyshots show exposed projection headlight assemblies which will almost certainly be replaced with a flush-front assembly so with that, chazcron would have had to guess as to what he expects from the headlights. In this case, he used a design similar to what is seen on the custom Transformers Camaro with dual HID units and LED trim around the edges. He has also inserted a set of LED daytime running lamps in the lower fascia vents that could see production, but I’m expecting something a little less high tech looking on the production 2016 Camaro.

In any case, you can visit Camaro6.com by clicking here to see all of the chazcron renderings while we continue to wait for any official word from General Motors on their next generation muscle car.