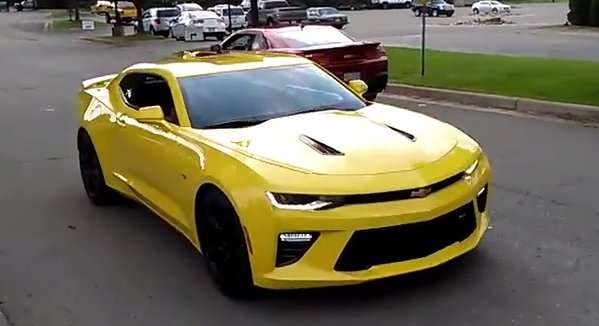 The 2016 Camaro SS Grumbles Through a Car Show

This past weekend, the 2016 Chevrolet Camaro SS stopped by the MIFBody.com car show in Milford, Michigan, and one of the show’s attendees has posted a video of the 6th gen car leaving – offering us a chance to hear the new LT1 grumble in the new muscle car.
Advertisement

Last weekend, hundreds of Chevrolet Camaro and Pontiac Firebird show cars ascended up Bakers of Milford for the 11th annual MIFBody show. The show faced incredible storms that caused all sorts of damage around the Milford area, but the Camaro and Firebird owners who braved the storm put together a great walk through the history of the GM muscle cars.

As a special treat for the show goers, an unnamed individual popped into the show behind the wheel of a bright yellow 2016 Chevrolet Camaro SS. While the 6th gen Camaro SS didn’t stick around, he drove the car around Bakers’ lot long enough to give everyone a look at the next generation car. For many in attendance, it was their first chance to see the 2016 Camaro while also giving everyone the unique chance to see all 6 generations of the Camaro in one place.

Most importantly, this gave the folks at the MIFBody show a chance to hear the LT1 V8 under the hood of the 2016 Camaro SS and, luckily for those who didn’t attend, someone got a short video of the bright yellow Camaro driving out of the show.

The 2016 Camaro SS in the Real World
We have heard the LT1 V8 from the 2016 Chevrolet Camaro SS roar via the ringtone that has been available on the CamaroSix website for the past few months, but this is the first video Ive seen of the 6th gen Camaro SS out in the real world.

The video is short and only gives us an example of the LT1 at very low rpm, but we can hear the car accelerate a bit as it nears the camera and as the 2016 Camaro SS passes the cameraman, we get to very clearly hear the LT1 as the driver eases out of the parking lot. Unfortunately, the video doesn’t include the Camaro SS pulling out of the parking lot, but for those who haven’t seen much of the 2016 model, this video is a brief example of what to expect when you finally meet the car in person.