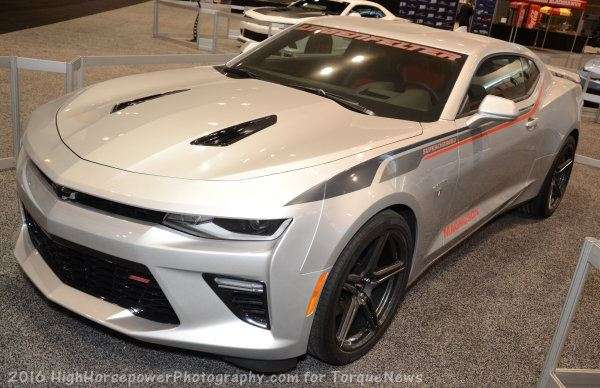 Since the 2016 Chevrolet Camaro first began reaching dealerships last year, owners have been rushing to private performance shops in pursuit of more power. For those Camaro owners who have a reliable shop nearby, big power is only a short drive away, but for those who don’t know where to turn for a local performance boost – the team at Lingenfelter has you covered.

Best of all, Lingenfelter has used their advanced knowledge of GM high performance engines to offer both a naturally aspirated package and a supercharged package will varying levels of upgrades and an output over 600hp in both cases.

Lingenfelter Naturally Aspirated 2016 Camaro SS
First up, we have the naturally aspirated package for the 2016 Chevrolet Camaro SS, which is built around the LT1 V8 that delivers 455hp and 455lb-ft of torque in stock form. Lingenfelter tears the LT1 V8 down, adding ported and polished cylinder heads, new valve springs and hardware, an “aggressive idle” camshaft package from COMP Cams, a ported and polished throttle body, a high flow intake setup and a custom engine calibration that brings everything together.

The result of those modifications is an output of 600 horsepower and 500lb-ft of torque, from what would likely look like a stock engine if the Camaro’s owner didn’t add any badging. While the idle would offer a hint to these cars not being stock, this Lingenfelter NA package for the 2016 Camaro SS makes one wicked sleeper.

Lingenfelter Supercharged 2016 Camaro SS
Those 2016 Chevrolet Camaro SS owners who are less concerned about the sleeping look and who want big torque to accompany their big horsepower will likely prefer the Lingenfelter supercharger package for the 6th gen Camaro. This kit is far less substantial, adding a Magnusson TVS2300 roots-style supercharger, a high flow air intake setup and a custom engine calibration to lift the output of the LT1 up to 630 horsepower and 600lb-ft of torque.

This supercharger package does fit under the stock Camaro SS hood, so this package offers more power with less work than the naturally aspirated package and when the hood is closed, the Lingenfelter-equipped Camaro SS would blend right in with the crowd. Of course, if you add the “supercharged” stripes and the Lingenfelter logos like the silver Camaro above, it will be a little tougher to fly under the radar at your local car meets.

Look for More from Lingenfelter
While both of these packages for the 2016 Chevrolet Camaro SS are impressive, it should be noted that the company has left a great deal of meat on the bone for future packages. The supercharger package is literally just a blower and a tune on an otherwise stock engine, yet they are still making 630hp and 600tq. If the tuning experts were to tear the engine down like they do with the NA package, adding internal components that will work with the supercharger, we could see a much more powerful Lingenfelter Camaro in the near future.