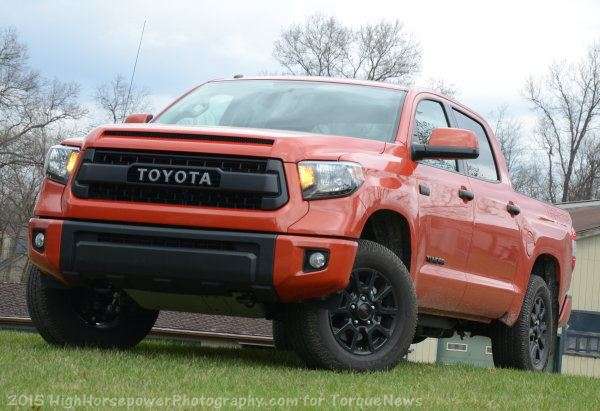 I recently had a chance to spend a week driving the 2015 Toyota Tundra TRD Pro and in doing so, I can confidently state that this mean looking trimline is the best half ton truck to come from a Japanese automaker – ever.
Advertisement

The Toyota Tundra has come a very long way over the past 15 years, transforming from what was little more than an oversized midsized pickup to a truck that can go head to head with the best from the Big 3 and legitimately compete. The third generation Tundra was introduced for the 2014 model year and during my first drive of the 2014 Toyota half ton pickup, it was very clear that this newest iteration of the Tundra was the real deal.

The 2014 Tundra was bigger, bolder and just plain better than the 2013 models in every way, impressing me like no other Japanese half truck before. However, I still had some complaints, as I still wasn’t in love with the styling (which I understand it 100% subjective) and I found the suspension of the Tundra to still be a little soft – particularly in towing situations. I felt that the 2014 Tundra’s ride was very smooth while still being able to handle rough roads, but on some rougher roads and when towing, the rear suspension seemed overworked at times. Also, while the 2014 Tundra was more aggressive than the previous models, I still don’t think that the chromed out face of the Toyota half ton pickup offered the rough and tumble that you need from a modern full sized pickup. The 2015 Toyota Tundra TRD Pro fixes both of those problems with a major exclamation point, making this package the best Japanese half ton truck I have ever tested. More importantly, this is the kind of truck that hardcore truck buyers want, as it feels like a truck in every way, without compromising ride quality in normal driving situations.

The Look
First off, let’s talk about the exterior design of the 2015 Toyota Tundra TRD Pro…which I absolutely love. I like sporty, aggressive- looking trucks and the TRD package takes the bold design of the Tundra, wraps it in a bunch of satin black trim and creates the meanest looking truck that Toyota has ever sold. The TRD Pro package adds the satin black grille with the Toyota font instead of the oval T logo, satin black badging, black painted wheels wrapped in Michelin all terrain tires, TRD logos around the interior, the Inferno two-tone orange seats, TRD dual exhaust, Bilstein dampers and TRD Pro logos stamped into each of the rear bedsides. While this truck is way more than just an appearance package, the items that are included all help to make it my favorite Japanese truck in terms of appearance. The black body bits combined with the gorgeous Inferno paint give this package the look of a proper sport truck while the TRD rims, Michelin tires and Bilstein suspension provide the perfect stance…sitting a couple inches higher than other new Tundra pickups. The TRD Pro Tundra looks like it has been customized, but these are all components of the basic package – creating a setup that should really resonate well with those folks looking to stand out from the crowd.

The Drive
The 2015 Toyota Tundra TRD Pro is the best looking Japanese half ton truck that I have ever tested and honestly, this is the first package that has a look that can rival the sporty packages from the Detroit automakers. However, Toyota made sure that this rig was way more than a pretty face. Like many of the 2015 Tundras sold in the America, the TRD Pro is powered by the iForce 5.7L V8, which sends 381 horsepower and 401lb-ft of torque to all four wheels via a 6-speed automatic transmission. There is no power increase for the TRD Pro 5.7L V8, but this package does add a TRD dual exhaust setup that looks cool with the big chrome tips, but more importantly, it allows the Toyota V8 to roar like a proper performance truck. The exhaust has a deep, throaty rumble at idle and when you put the hammer to the floor, the resulting roar is like nothing I’ve ever experienced from a factory stock Japanese pickup. I have often admired the powerful iForce V8, but Ive been less than impressed by the whisper-quiet exhaust that just doesn’t work for a full size truck – especially one that features a sporty design. Fortunately, the TRD exhaust fixes that problem perfectly and I imagine that many Tundra owners who hear the TRD Pro will shop that exhaust system for their own Toyota pickup. Next up, the TRD wheels wrapped in the Michelin all terrain tires add styling, stance and better footing in loose footing. The modern Tundra packs more offroading capabilities than past models, but the TRD Pro wheel/tire package will allow this half ton Toyota to dig through deep mud and deep snow without breaking much of a sweat. However, while these somewhat aggressive all terrain tires improve traction on muddy trails and snow-covered roads, they tread design isn’t aggressive enough to “sing” on the highway, so the TRD Pro tires offer a great combination of off-road and on-road capabilities.

The Suspension
The most significant working portion of the Toyota Tundra TRD Pro package is the Bilstein suspension setup, which adds TRD springs with Bilstein remote reservoir shocks up front with TRD off-road leaf springs out back, also paired with high performance Bilstein dampers. This Bilstein damper system allows for a smoother ride on the road, a more capable ride off-road and more suspension travel for when you are dealing with uneven ground – as when driving down a rocky trail in the woods. On first thought, you might think that the Bilstein dampers paired with the heavy duty TRD springs are only good for off-roading, but you would be wrong. While the suspension system clearly gives this Tundra a better chance at digging through the roughest off-road conditions, this system actually improves the ride quality on the road as well. The Bilstein shocks do a great job of absorbing both small and moderator bumps in the road, while still providing stiffness when the suspension is pushed to its limits. Unlike many trucks with off-road suspension, the Tundra TRD Pro won’t beat up you and your passengers during a normal weekday drive.

After enjoying the ride quality of the TRD Pro Tundra, I headed down some rough local dirt roads to see how the Bilstein dampers handled a rougher surface. Not surprisingly, the TRD Pro suspension setup did a beautiful job of handling even the deepest, harshest ruts and grooves in the dirt road, making short work of roadways that have some small SUVs going 10mph to avoid sustaining damage. I didn’t do any actual off-roading with the TRD Pro, but I sent it down the roughest unpaved roads that I know of – roads that I’ve seen break wheels and suspension components on vehicles whose drivers were simply going too fast – and it handled it just as well as the paved roads. Finally, one of my key complaints with the 2015 Toyota Tundra during my last test session was that the rear suspension felt too spongey while towing my 5,000lb test trailer. While trailer weight often helps to squash rear-end bounce, the non-TRD Pro Tundra bounced a touch more than other trucks with that same trailer on the same roads. It wasn’t a dramatic issue, but it was enough for me to notice. With the TRD Pro, none of that bounce was present when pulling my 5,000lb 2-horse test trailer. The high performance suspension allowed the TRD Pro Tundra to perform better in my trailer testing situations than any Japanese truck I have ever tested – and quite a few American pickups. Also, Toyota’s rear camera system is located ideally for easy trailer mounting.

The Final Word
In my years of driving, I have owned a half dozen or so half ton pickups and I am admittedly a fan of the American pickups. In the past, I have been a critic of the Toyota Tundra when compared to the Ram 1500 or the Ford F150, but this newest generation Tundra is by far the best competition that Toyota has built for those two top American pickups. When you tack on the components of the TRD Pro package, you have the best Japanese truck that I have ever tested – one which has all of the styling and capabilities to attract even hardcore American truck fans. With the 2015 Toyota Tundra TRD Pro, we have proof that the Japanese automaker can produce a half ton truck that will truly go head to head with anything from Ford, GM or Chrysler. Everything about this truck is done perfectly so if you want a pickup that is great on unpaved surfaces, smooth on paved roads, quick enough to keep up with the rest of the half ton segment, strong enough to pull a large trailer with confidence and great looking – this could be your next new truck.

Shamid Mathura wrote on June 8, 2015 - 11:03am Permalink
I own a 2014 tundra platinum, and I love it. I added a supercharger to it and it's flipping fast!! I also lower it. I don't haul any thing, so that's why I lower it, also for looks. I kept it looking stock till you pull up next to me. Then you'll see what this truck can do. Love it!