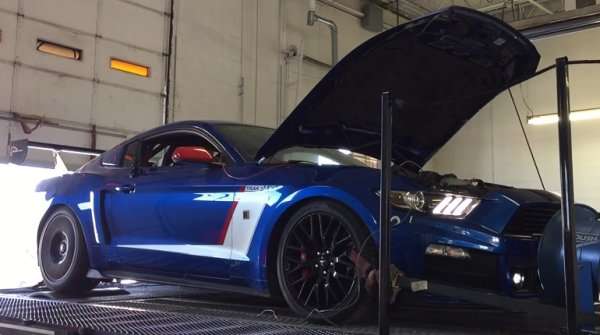 The 2015 Ford Mustang GT packs a serious punch in stock form with 435 horsepower and 400lb-ft of torque, but the video below shows what the newest Mustang can do with the Phase 1 supercharger package from Roush Performance – packing almost 750 rear wheel horsepower.
Advertisement

The Ford Mustang is one of the most commonly customized cars in the US market and in the world of Mustang tuning, few names are as respected as Roush Performance. Roush was quick to show off their take on the 2015 Mustang when it first debuted, offering a unique look that allows it to fit in with past Roush Mustangs.

Roush is continuing to develop new, higher performance packages for the 2015 Ford Mustang GT, but the company has just published a video showing their Phase 1 supercharger package at work on the dyno. The result of this relatively minimal package is more than enough power to make a Hellcat Challenger owner blush.

Roush Mustang GT Phase 1
This new video shows a 2015 Ford Mustang GT with the Roush Phase 1 package and a few addition goodies, including a 75mm supercharger pulley, larger fuel injectors, a revised fuel pump booster kit and a proper ECU tune to bring everything together for the best possible power output. As a result, this monster Mustang makes peak numbers of 747 rear wheel horsepower and 599lb-ft of rear wheel torque. We can also see that during the three dyno rips, the Phase 1 Roush Mustang GT worst figures were 710 horsepower and 547lb-ft of torque – which are still pretty impressive numbers.

Less Expensive Than the Hellcat
While the price of the actual car in the video below hasn’t been stated by Roush, we know that the Roush Stage 3/Phase 1 supercharger package for the 2015 Ford Mustang starts at $21,995. When you add that to the base price of the 2015 Mustang GT of $33,125, you get a total price of $55,120. The car below has a unique pulley, larger injectors and the fuel pump booster kit, all of which would add to the final price, but with the Hellcat Challenger starting around $60,000, those items likely won’t push the cost of the Roush Mustang GT past that of the supercharged Challenger.

Of course, I should point out that comparing the Roush Stage 3 supercharger package for the 2015 Ford Mustang GT to the factory-stock 2015 Dodge Challenger SRT Hellcat is comparing apples to oranges. The Roush package is an aftermarket option while the Hellcat is a ready-to-go, factory built muscle car. However, with the Hellcat Challenger setting the bar for the entire muscle car segment, it will be the vehicle by which all others are compared and if you are a 2015 Mustang GT owner, the Roush Stage 3/Phase 1 package should give you enough power to beat up the wicked Mopar muscle car.

LG's New EV Battery Plant Is a Welcome News for Tesla
Tesla Giga Berlin's New Hurdle: It's Not Only the Gov't, but Now Tesla Itself
END_OF_DOCUMENT_TOKEN_TO_BE_REPLACED