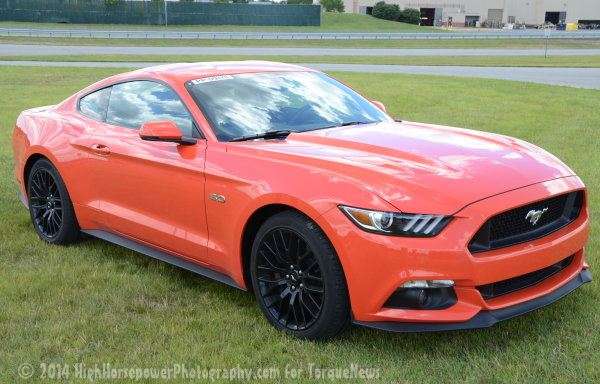 Ford Motor Company still hasn’t had much to say about the 2015 Ford Mustang Shelby GT350, but new information from Motor Trend reinforces the dealership information from earlier this month which suggested that the S550 Mustang GT350 would be powered by a new naturally aspirated 5.2L V8 – possibly packing a new flat plane crankshaft design.
Advertisement

However, we learned from the folks at Mustang6g.com that the new Ford Mustang will likely have some package wearing the GT350 badge and that there will be some variant that is powered by a naturally aspirated 5.2L V8. This information came through the dealership computer systems with the rest of the 2015 model year Mustang information…which is what leads us to believe that the 5.2L-powered GT350 will arrive before 2016. The key piece of information is the arrival of the new 5.2L V8 and while there is still no word from the Motor Company – the folks at Motor Trend have spoken with unnamed insiders that reinforce the rumors of a flat plane, 5.2L V8 coming to the top of the line 2015 Mustang.

A Flat Plane V8 for the 2015 GT350
Based on the long list of abbreviations in the dealership system that accompanied the NA 5.2L V8 listing were a collection of letters that lead many to believe that the 2015 Mustang GT350 would feature a flat plane crankshaft design. This flat plane design would allow the 5.2L V8 to be very quick revving and very powerful, with similar technology already well used in modern Ferrari engines. For a car like the 2015 Mustang GT350 – which is expected to be a road racing force like we have never before seen in a road car – a high revving V8 would be ideal. Also, the flat plane crankshaft design doesn’t feature the added balance weights of the cross plane crankshaft at use in most American V8 engines, so it is easier for these flat plane engines to make bigger power.

However, the downside to a flat plane crankshaft design is that there is a great deal more engine harshness and vibration so before installing it in the 2015 Ford Mustang Shelby GT350, the SVT team would have to solve that extra vibration. According to Motor Trend, a large damper has been placed on the front end of the crankshaft to better balance out the rotating assembly, but word on the street is that the vibration of the engine has literally been severe enough to loosen accessories that are attached to the engine.

Electrical Failure at the Nürburgring
In their discussion of the flat plane crankshaft in the 2015 Ford Mustang Shelby GT350, the inside information suggests that the SVT team has already run into one big problem while testing the next generation super-Stang. While testing at the Nürburgring (which led to a frenzy of spy shots and video footage), the vibration of the engine was severe enough that it loosened the bolts for the starter. When the starter was worked loose enough, the Mustang experienced total loss of electrical systems…essentially shutting the car off as it blasted along the world’s most famous and most grueling road course. The good news is that Motor Trend reports that after the Nürburgring electrical incident, the SVT team took measures to ensure that everyone bolted to the engine would stay there under long periods of hard driving.