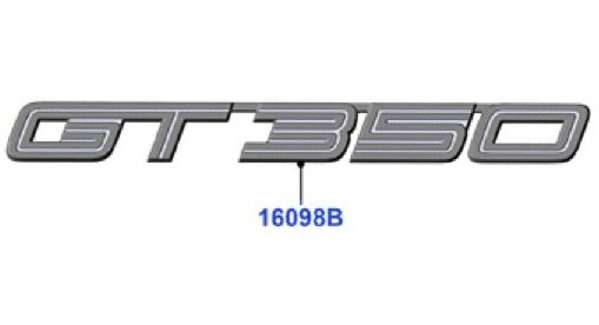 The Shelby GT350 Name Possibly Confirmed for the 2015 Ford Mustang

It has been all but official that the highest performance version of the 2015 Ford Mustang would be the new Shelby GT350 and while there is still no positive confirmation from Ford Motor Company, the folks at Mustang6g.com have found what appears to be the first image of the 2015/2016 GT350 Mustang badge – further confirmed unofficially that the next super-Stang will continue to wear the Shelby name.
Advertisement

Since the covers were first pulled off of the 2015 Ford Mustang GT back in December of 2013, there has been a popular, ongoing discussion about what to expect in terms of a premium performance version of the next generation Mustang. Unfortunately, Ford really hasn’t had anything to say about a possible Shelby or SVT model and with the crazy amount of attention that they are getting around the 2015 Mustang in base V6, EcoBoost and GT V8 form – Ford really doesn’t need to “use” that information to get more attention on the Mustang right now. Instead, Ford will wisely wait until they need to drop a big bomb on the American performance car market and at that point, they will roll out the new Shelby GT350…or at least that is what we think that it will be called.

Fortunately, while Ford Motor Company isn’t interested in offering up any official information on the most powerful version of the 2015 Ford Mustang, the folks at Mustang6g.com are very interested in what the future holds for those prospective Mustang owners who want to go really, really fast. Early on, the Mustang6g crew discovered the first key information lists through the dealership computer system and once again, the rabid 2015+ Mustang fans have dug up some key information – this time seemingly confirmed to the world that the next premium performance Mustang will be called the GT350.

The Mustang GT350 Badge
Once again, a member of Mustang6g.com was looking through some dealership level Ford Motor Company documents and he or she stumbled across the logo shown above. It is hard to interpret the GT350 logo as anything other than a future trimline badge and the 16098 fender badge identification number seems to confirm that the next generation super-Stang will indeed be called the GT350. Also, it should be noted that the GT350 badge is finished in the familiar Shelby font, so I would expect it (not surprisingly) to be called the Shelby GT350 Mustang.

Just to be clear, this information hasn’t been offered up in any of Ford’s information that is intended to reach the public but rather, this image comes from dealership information documents that will help salespeople sell the 2015 Ford Mustang…while also helping the folks in the parts department prepare for the first orders for next generation Mustang parts.

This image doesn’t confirm that there is a Shelby GT350 Mustang coming to serve as the premium performance model – but automakers don’t just put random items in dealership information so we know for sure that the GT350 badge will appear on the fender of the Mustang very soon…we just don’t know exactly what the GT350 will be.

In the long run, the unearthing of this GT350 badge doesn’t technically confirm anything – but it adds to the long list of facts that suggest that there will be a Shelby GT350 Mustang arriving very soon.

Could the GT350 Mustang Be a 2015 Model?
Throughout all of the discussions about the next generation Shelby Mustang, it has been assumed that the next super-Stang could arrive for the 2016 model year. However, the documents showing the GT350 badge lists this as 2015 model year information. Since the 2015 model year is pretty much upon us and we still haven’t been formally introduced to the GT350 Mustang, it seems unlikely that it would arrive in 2015, but there is one key fact that could have the new GT350 out in 2015.

The very first Shelby Mustang was a G.T. 350 back in 1965. That makes 2015 the 50th anniversary of the Shelby Mustang and because of that, I think that Ford will make sure to roll out at least a limited number of Shelby models for the 2015 model year to celebrate a half century of the Shelby name on the mighty Mustang. Since we haven’t seen the new GT350 yet, I would expect that a 2015 Mustang GT350 would arrive late in the model year – but I believe that it will come in time to celebrate 50 years of the high performance partnership between Ford Motor Company and the late Carroll Shelby.