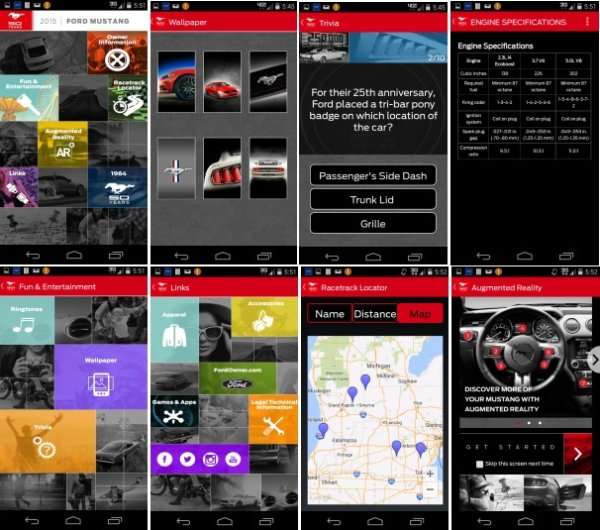 In addition to all of the other exciting new features of the 2015 Ford Mustang that will make owning one a complete delight, Ford Motor Company has also cooked up a unique smartphone app that will allow owners to explore the features of the new Mustang with some interactive help – while also learning more about the history of the Mustang and finding the closest drag strip.
Advertisement

It seems like there is a smartphone app for pretty much everything so it seems fitting that the high tech 2015 Ford Mustang would have a unique owner’s app of its own. The 2015 Mustang app works with the camera, the internet browser and the GPS system of your phone to explain how the features of your Mustang work while also offering information on the last 50 Years of the Mustang, directions to the nearest drag strip and more.

The 2015 Mustang Owner’s App Features
While the full details of the 2015 Ford Mustang Owner’s App are currently limited, we have information on the most crucial aspects of the program. The Mustang App includes options for Owner Information, Fun & Entertainment, a Racetrack Locator, Augmented Reality, Links and a piece on Mustang history.

The image above shows a small screen shot of each main section excluding the 50 Years section. Starting at the top left and moving left to right, then down and right to left, the image above shows the app home screen, the wallpaper page, a trivia page, the engine specifications page of the Owner information section, the Augmented Reality page, the Racetrack Locator page, the Links page and the Fun & Entertainment page (in which the wallpaper page is found).

Fun & Entertainment
This section of the 2015 Ford Mustang app has things like Mustang ringtones (6 of them), Mustang wallpaper images (again, 6 of them) and Mustang trivia.

Links
The links section sends you to places where you can get 2015 Ford Mustang apparel, accessories for your Mustang, legal information and a quick button to FordOwner.com. There are also quick lines to the Ford Mustang page on the various social networks.

Essentially, where you would previously dig through your paper owner’s manual to figure out what a given button or knob on the dash of your 2015 Mustang does, the Augmented Reality feature of the owner’s app puts all of that information right at your fingertips.

Racetrack Locator
Finally, my favorite aspect of the 2015 Ford Mustang owner’s app is the racetrack locator. Using the GPS feature of your smartphone, the 2015 Mustang app will show you all of the drag strips in your area. This way, if you are headed to the track with your 2015 Mustang and you get lost, you can search on your phone for how to find that track. Better yet, say that you are driving to some annoying family function and you get lost, you can search to see if there are any drag strips in the area and if there are, you can check to see if they are open that night rather than going to the boring function.

By the way, you don’t have to have a 2015 Ford Mustang (or any Mustang) for the Racetrack Locator to work so this portion of the App is a good reason for all racers to have the handy dandy 2015 Mustang app.

I have to say that I find the Racetrack Locator particular odd, considering that Ford Motor Company goes to great lengths to point out that racing at the track voids your warranty. Between the Racetrack Locator and the new Line Lock feature that is only to be used on the track – even though racing on the track can void your warranty – it is almost like Ford wants 2015 Mustang owners to go to the track and kill their warranties.

Finally, there is a button in the Mustang Owner’s App that has the 50 Years logo, but when I click that, it asks for a 5 digit number from my quick reference guide…which I do not have. Because of that, this section is a secret that, hopefully, we will find more about soon.

The 2015 Ford Mustang Owner’s App is in Google Play stores right now and it simply called “Mustang Owner”. Even if you don’t have as 2015 Mustang, you can still download the app and play with the features. For the best look possible, I recommend downloading the app just to see what Ford has in store for 2015 Mustang owners.