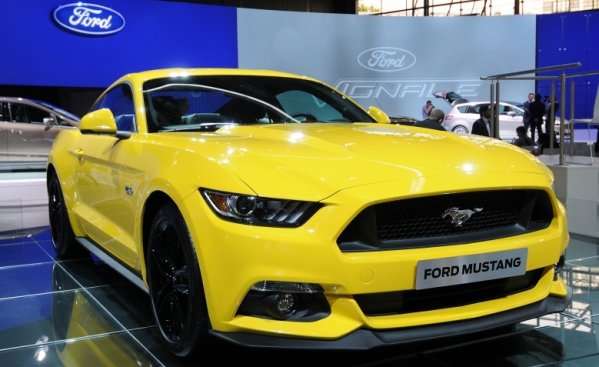 The 2015 Ford Mustang Makes its Grand European Debut in Paris

The Paris Motor Show is going on right now and the key introduction is the debut of the 2015 Ford Mustang, marking the first time that a Ford Mustang has been displayed at a European auto show as a new model coming to showrooms soon.
Advertisement

The 2014 Paris Motor Show or the 2014 Mondial de l’Automobile as it is known in France, is one of the biggest automotive events in the European market so it is fitting that the first ever Ford Mustang being marketed at Europe would make its production debut in “The City of Love”. Paris is all about style and about being on the cutting edge, so it makes good sense for the Motor Company to roll out their strikingly styled next gen pony car so it should come as no surprise that the Mustang is attracting lots of attention under the bright lights of the massive Parisian show.

The European Debut of the 2015 Ford Mustang
While the 2015 Ford Mustang has made appearances around Europe, the debut at the Paris Motor Show marks the first time that the general European public can check out the first European-marketed Mustang ever. To help make sure that the 2015 Mustang draws as much attention as possible on a show floor that is packed with eye-catching new vehicles, Ford brought out two examples of the new pony car – one bright yellow fastback packing the 5.0L V8 and one metallic blue convertible powered by the new 2.3L EcoBoost 4-cylinder engine. There is no V6 model available for viewing in Paris because what Americans know as the base model Mustang will not be sold in Europe so for the folks in Paris, Germany, the UK and everywhere else – their base model is the EcoBoost 4.

That is a good problem to have.

Will the Mustang Shine in Europe?
While there is plenty of interest in the European arrival of the 2015 Ford Mustang, plenty of people are skeptical that the mighty American muscle car will sell all that well in Europe. Although Ford has taken measures to make this new Mustang more attractive to buyers outside of the US, including the new exterior design and the introduction of the EcoBoost 4-cylinder, the Mustang is still a fairly large car buy European standards. Keep in mind that many European sports cars are smaller, whether you are talking about the Porsche 911 or the Renault Megane RS. The Mustang isn’t a huge vehicle, but it is bigger than your average European sports car and that could deter buyers from giving it a real chance. Of course, there will be those European buyers who want a big, strapping American muscle car and while those folks will likely love their Mustang – those folks are also few and far between.

In the long run, the 2015 Ford Mustang won’t see European sales rivaling American sales, but I expect that Ford doesn’t expect to sell 100,000 units a month. Introducing the Mustang in Europe isn’t about sales domination, it is about giving those Europeans and those Americans living in Europe a chance to buy one of the most famous American sports cars of all time without dealing with the high priced grey market importers.

With the introduction of the 2015 Ford Mustang, it shouldn’t be too long before the first examples of the European-sold next gen pony car arrive in dealerships around the world. Ford will obviously roll out the 2015 Mustang here in the states, but once they can begin sending models overseas without slowing the American delivery process, European buyers will have their first ever chance to walk into their local Ford dealership and drive out in a brand new Mustang.

The 2015 Ford Mustang is on display right now in Paris and will be until the event ends on the 19th so if you are in the general area and you want to see the new pony car in person, you have another week and a half to do so.