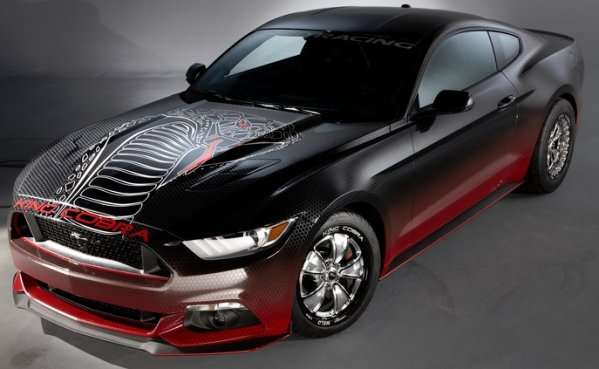 The 2015 Ford Mustang King Cobra is the Ultimate Catalog Build

In order to show off just how wild you can make your 2015 Ford Mustang GT by only using the Ford Racing catalog, FoMoCo has offered up the new 2015 Mustang King Cobra – a super modified, high performance pony car that is creating strictly using packages from Ford Racing.
Advertisement

While the vast majority of the vehicles at the 2014 SEMA Show are clad in one-off components and parts that manufacturers are considering for production, the 2015 Ford Mustang King Cobra is very different. Rather than take a 2015 Mustang GT and have a performance shop add a bunch of components that most buyers will never consider, Ford kept this beast in house and they built an awesome custom Mustang using Ford Racing components. This means that a 2015 Ford Mustang GT owner could literally transform his or her new pony car into the King Cobra shown here with nothing more than a Ford Racing catalog and a good relationship with a body shop (for the paint work).

“At Ford Racing, we like to push cars to their absolute limit. This is something we have been doing for over 113 years and why we were so excited to get our hands on the all-new, 2015 Mustang,” said Jamie Allison, director, Ford Racing. “We wanted Mustang enthusiasts to be able to open up the Ford Racing parts catalog and get one of everything and see what they could get. We think the King Cobra package is it. But none of this great work would be possible if Team Mustang had not built the best production Mustang yet.”

The 2015 Ford Mustang King Cobra
The King Cobra on display now at the 2014 SEMA Show in Las Vegas began its life as a run of the mill 2015 Ford Mustang GT. Ford Racing then tore into their catalog, calling on the Drag Pack, the Handling Pack and the Super Pack to make this 2015 Mustang perform like no other. These are the three performance upgrade packages available for the new Mustang GT so for a new owner, this is pretty much like buying everything that Ford Racing has for the new pony car and the result is one wicked performance machine.

First off, the Drag Pack for the 2015 Ford Mustang GT adds heavy duty half shafts to help safely put the power to the ground and a rear subframe kit that helps to prevent excessive suspension travel (wheel hop) during a hard launch.

Finally, the new Super Pack for the 2015 Ford Mustang GT adds a 2.3L Twin Vortices Series supercharger that was designed by Roush Performance and Ford Racing. With the help of a new intake manifold, a new throttle body, a cold air intake system, a new fuel delivery setup, an air to liquid intercooler and a custom engine calibration, the Super Pack lifts the 2015 Mustang GT from 435 horsepower to over 600 horsepower.

Adding these three performance packages from the Ford Racing catalog give the 2015 Mustang GT a more aggressive stance, improved handling, improved launching abilities and – most important – enough power to run through the quarter mile in 10.97 seconds. Remember, these components all came straight out of the Ford Racing catalog, so literally any 2015 Mustang GT buyer with a strong budget could build themselves a King Cobra at home.

Appearance Not Included
While a 2015 Ford Mustang GT owner can flip through a Ford Racing catalog and purchase all of the items that make the SEMA King Cobra show car so impressive on the performance side of things, the appearance is a different story. First and foremost, the King Cobra Mustang wears what looks to be a very elaborate body wrap, with red at the bottom of the car shifting to black as it gets higher on the body. Also, the intricate honeycomb pattern that covers the entire car, the massive snake on the hood and the King Cobra lettering on the nose all appear to be one-off features, as are the King Cobra branded Weld wheels at all four corners and the Hoosier drag tires used to run the 10.97 quarter mile.

Panasonic Updates Profit Forecast, Noting How Much Tesla Batteries Help The Jump
2022 Porsche 911 GT3 Laps Nurburgring in 7:04 With Journalist Behind The Wheel
END_OF_DOCUMENT_TOKEN_TO_BE_REPLACED