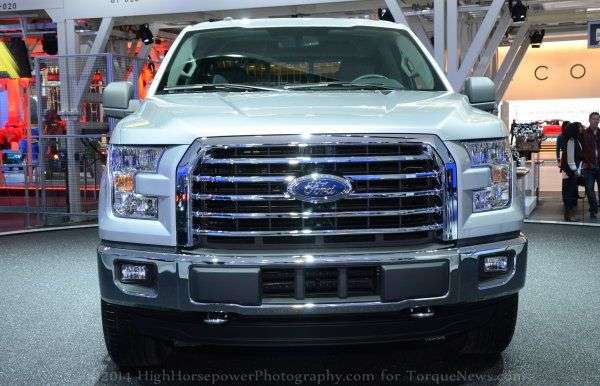 As all of the automakers work to come up with the most fuel efficient vehicles possible, the 2015 Ford F150 could call upon the new 2.3L EcoBoost 4-cylinder that will power the 2015 Ford Mustang to create a Super Fuel Economy model that would offer far less trucking capabilities and far better fuel economy – essentially battling the fuel economy of the midsized truck market with an F150.
Advertisement

The 2015 Ford F150 will be comprised heavily of aluminum and when combined with the new 2.7L EcoBoost V6 engine, the next generation F150 will battle for the title of the most efficient half ton truck in America. Ford has promised that this new EcoBoost V6 will offer excellent fuel economy and similar power to some non-premium V8 engines. That engine might make the 2015 F150 the most fuel efficient half ton truck, but it will be a tough fight with the amazingly capable Ram 1500 EcoDiesel.

Ford could introduce a new Super Fuel Economy package (SFE) of the 2015 F150 pickup in a regular cab, short bed configuration that would derive its power from the 2.3L EcoBoost 4-cylinder engine that will power the 2015 Ford Mustang EcoBoost. This truck would essentially fill the gap created by bringing an end to the popular Ford Ranger, offering significantly less towing and hauling capabilities than the other F150 pickups while offering far better fuel economy.

A Lighter Duty Ford F150 Could Offer Incredible Fuel Economy
Ford Motor Company has stated that through the use of new aluminum components including large portions of the body, the 2015 F150 will be about 700 pounds lighter than a similarly built truck constructed all from steel. That is likely in the configurations that have the biggest changes, which are likely the larger trucks with larger aluminum panels. However, we have to keep in mind that Ford designed the 2015 F150 to be tough enough to take on any situation and tow a whole lot of weight in the process.

Were Ford to essentially create an “F150 Light”, that was available with far fewer weight adding options and only in the smallest configuration, it could be a big hit with the people who really don’t need the capabilities of a new F150. We all know that a great many half ton truck owners really don’t need to tow 10,000lbs or do anything else that requires big truck owner. Those are the same folks that would have purchase a Ford Ranger a decade ago, but the Ranger is gone and Ford seemingly has no intention of bringing it back in the US. Instead, Ford points out that the F150 can do everything that the Ranger could and more while also offering better fuel economy in a half ton truck – while still maintaining more capabilities than the last Ranger.

The problem is that when Ford steers a buyer into an F150, they are still buying a truck that is bigger and more powerful than what they really want while generally being less efficient than the competitors in the smaller truck market like the Toyota Tacoma or Nissan Frontier. That is where the 2015 Mustang’s 2.3L EcoBoost could come into the picture, as this small yet powerful engine could make for a solid SFE pickup.

My Vision of the Ford F150 SFE EcoBoost
While it has become unusual to see a regular cab, short bed full sized pickup, the 2.3L EcoBoost 4-cylinder powered next generation F150 should be a true efficiency model that does away with features that add weight and that begins with the cab, bed and chassis. To keep the truck as light as possible, it could come only as a regular cab and with the shortest bed, thus the shortest chassis. The 2.3L 4-cylinder EcoBoost engine should be mated to a beefed up version of the 6-speed automatic transmission from the 2015 Mustang that will help achieve the best fuel economy possible. This drivetrain will send at least 305 horsepower and 300lb-ft to the rear wheels of the new Mustang, but it is speculated that the power output could climb as high as 350 horsepower and 350lb-ft of torque. Power output towards the end of that spectrum would leave plenty of room below the 2.7L EcoBoost V6, while also offering less capabilities and better fuel economy.

This would be the least powerful of the new Ford F150 drivetrains, but it would also only come in the lightest possible F150 configuration. This wouldn’t be a truck for someone who wants solid fuel economy and the ability to do some hard work – this would be a truck marketing specifically for the people who are going to do little more than to throw some stuff into the bed once in a while or maybe two a jet ski here and there.

Of course, I have little doubt that there will ever be a Ford F150 with a 4-cylinder engine, but the steady advancements in Ford’s EcoBoost technology is allowing for more and more power from less engine. It might not happen for the 2015 F150, but I expect that the future will hold an SFE F150 that will call on the 4-cylinder EcoBoost technology that is going to make the 2015 Mustang EcoBoost such a formidable performance car. The 2.7L EcoBoost will offer great fuel economy, but those folks who want even better MPGs without being able to participate in the Baja 1000 – a 4-cylinder EcoBoost SFE package could be the answer.

Robert Carver wrote on July 7, 2014 - 11:45pm Permalink
50 years ago you could order your Mustang GT with the K-Code HiPo 289 Four-Barrel V-8 making 271 Horsepower. Now we have the EcoBoost 2.3 Liter that will have an output between 305 to 350 Horsepower. It is amazing how engine technology has advanced over the decades. While some may hesitate to get the 4-cylinder EcoBoost in their Mustang or F-150 I think it is a psychological issue given the power and torque these high tech engines now produce. CAFE standards and EPA standards have pushed the automotive companies to manufacture efficient, powerful, clean burning fossil fuel engines. It will just take some time for the driving public to catch up to our new reality.
Herman Campbell wrote on July 9, 2014 - 9:50am Permalink
I see this as a possible idea in the future, but my only concern in the F150 is still a heavy vehicle. Take the Explorer with the 2.0 Ecoboost for example. On paper the 2.0 make more torque than the 3.5 V6 and is down 50hp, but it feels even less. I still think even with equal power numbers a smaller engine will have to work harder and in turn lose some of the advantage it would have over a larger engine, or at least thats been the case with the Explorer.
dave wrote on July 14, 2014 - 5:49am Permalink
I can't see a 2.7 liter v6 lasting very long in a heavy 1/2 ton what ford needs is a Cummins diesel
Herman Campbell wrote on July 14, 2014 - 1:08pm Permalink
You'll never see a Cummins in a Ford truck. Ford could develop a diesel for the F150, but they wont. Ford said at current gas prices the buyer will recoup their money quicker with an Ecoboost motor vs a diesel. Also the 2.7 V6 is projected to put out in the neighborhood of 320hp and 370 ft lbs
John wayne wrote on June 15, 2015 - 5:44pm Permalink
The old 300 straight 6 (4.9liter) made like 150 hp and 260ft-lbs. those engines pulled a many a boat trailers back in the day.