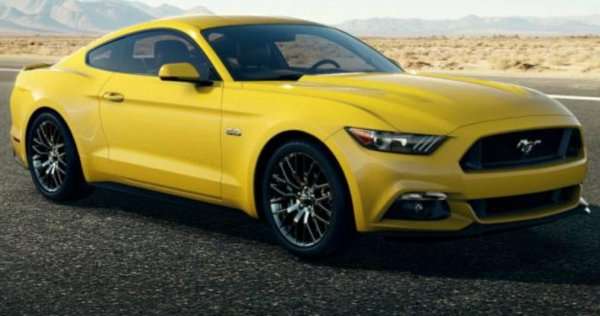 2015 Ford Mustang to be the Most Colorful in Years, Convertible Coming Late in 2014

As we continue to dig through the massive amounts of information on the new 2015 Ford Mustang, we have stumbled across a seemingly incomplete list of the exterior color options and the wheel choices – making the S550 Mustang the most colorful in terms of the number of choices.
Advertisement

At the Dearborn debut of the 2015 Ford Mustang, Ford design boss J Mays mentioned that the new pony car would be offered in a variety of colors including the stunning Race Red shown in the gallery along with Competition Orange, Gauge Green and a Triple Yellow that Mays assured us was so bright that it would burn out retinas (shown above).

The 2015 Mustang minisite now has a list of optional exterior colors that does not mention any greens but it does list 10 different hues including the aforementioned Race Red, Competition Orange and Triple Yellow but we also see that 2015 Mustang buyers will be able to opt for Deep Impact Blue, Ruby Red, Black, Magnetic (a lighter grey), Guard (a darker grey), Ingot Silver and Oxford White. There is no mention of Gauge Green so we have to wonder if that will perhaps be a late availability model – or maybe even a color reserved for some special edition package that we haven’t see yet. Maybe the "green" will be reserved for the super efficient yet surprisingly powerful EcoBoost Mustang.

Regardless of the timing, the arrival of Gauge Green at some point will give 2015 Mustang buyers 11 exterior color choices makes this new Mustang the “most colorful” in a few years as the current Mustang GT (2014 model year) is only available in eight colors.

In addition to offering us a look at the expansive color palate, the 2015 Ford Mustang minisite reveals that the new pony car will be available with at least 4 wheel choices. Right now, Ford indicates that there will be an 18 inch machined wheel with 5 split spokes, a 19 inch black multispoke design that is very similar to the current SVT performance package wheels (shown on the Triple Yellow Mustang above), a 19 inch 10 spoke “premium” wheel design and a 20 inch machined split 5 spoke design that is also similar to what we have seen in the SVT lineup in recent years.

Finally (for now) we have some bad news for those folks looking to cruise around next spring in their 2015 Ford Mustang Convertible. The new Mustang minisite has a tiny bit of fine print that indicates that the newest droptop ‘Stang will not be available until “late 2014”. I have a hard time believing that Ford Motor Company would really wait until late 2014 on the calendar to release the new Mustang Convertible because it will be cold out in many parts of the United States and that drives demand down.

I would guess that by “late 2014”, the Motor Company means that it will be a late availability model so it will arrive sometime after the 2015 Mustang coupe – likely leaving plenty of time for new Mustang buyers across this great nation to enjoy some top-down cruising before the snow begins to fall and the temperatures head into the freezing range.

There is plenty of information still unreleased (or undiscovered) on the 2015 Ford Mustang so stay tuned to TorqueNews.com as we continue to cover the launch of the 6th generation of the fabled Ford pony car.