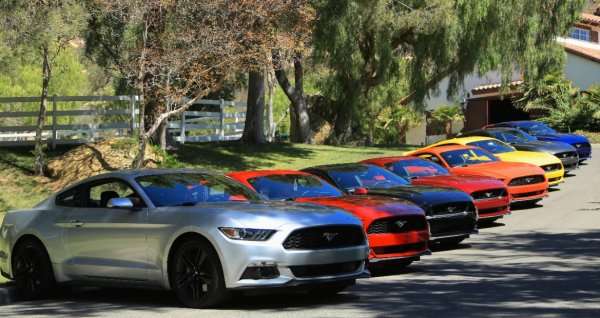 The 2015 Ford Mustang has barely hit the market and the Motor Company has already issued a recall due to a concern that a component of the safety restraint system may not have been calibrated correctly by a third party supplier.
Advertisement

Over the past year or so, Ford fans have had their fill of poking fun at Chevrolet fans due to the seemingly endless line of recalls from General Motors, but just as the new 2015 Ford Mustang has begun rolling off of the assembly line - the Motor Company has been forced to issue the first recall for the brand new pony car.

The Cause for the First 2015 Mustang Recall
The reason for the first recall of the 2015 Ford Mustang focuses on a component of the safety restraint system, specifically the passenger’s side seat belt buckle assembly. Included in the seat belt buckle assembly is a buckle tension sensor and this sensor should have been calibrated by the supplier that provides this component. Unfortunately, it seems that it was either not calibrated correctly or not calibrated at all and because of that, the passenger’s side seat belt may not function correctly in the event of a crash.

Ford hasn’t offered a particularly clear explanation of what might happen if the seat belt tension sensor isn’t calibrated correctly in the 2015 Mustang, but they did state that it could cause a “misclassification of the front passenger seat occupant”. That leads me to believe that the sensor could recognize the passenger as being lighter or heavier than he or she actually is and that could lead to an improper amount of tension applied to the seat belt system.

Of course, any incorrect function of the seat belt system could lead to an injury in the event of an accident, but this recall comes not because of a report of an injury. In fact, Ford hasn’t received any real world complaints about this component failing. Instead, Ford Motor Company is recalling their brand new pony car because the system does not comply with the federal standards applied to restraint systems so because of that, the automaker is getting these models back to dealerships to make sure that the seat belt buckle sensors are calibrated to function properly.

Only 53 New Mustangs Affected
The good news about this 2015 Ford Mustang recall (if there is such a thing as a good aspect to a safety recall) is that Ford caught the problem very quickly. Because of that, only 53 examples of the new Mustang are affected by this problem that is at fault for the recall and those units were all built between August 18th and October 2nd. 50 of those cars are in the United States while the other 3 are located north of the border in Canada.

Also, based on the wording of the recall statement, it sounds like the seat belt system will keep passengers in the 2015 Ford Mustang from colliding with the dash board in the event of a crash, but the seat belt might not protect the passenger as well as it should. The combination of that simple fact with the lack of federal regulation compliance is why the company had to issue this recall and while this seems minor, owners of these 53 cars (some of which I suspect might not have been sold to the public) will have to make a visit to their local dealership to have their seat belts proper calibrated.

So Chevy fans, this is your chance to take a few jabs at your Ford-driving friends about recalls, but the difference between recalling 53 Mustangs and recalling every 5th generation Camaro will probably prevent most bowtie fans from having too much fun with this announcement.