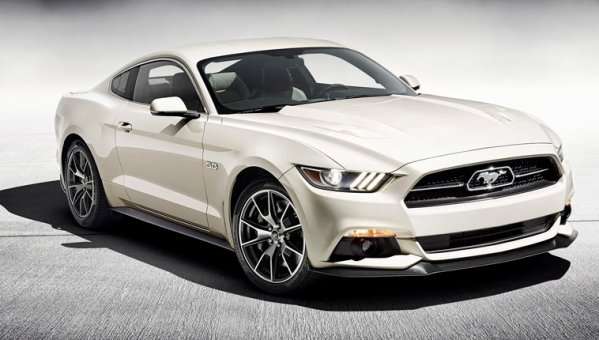 We can always expect to see dealerships adding their own price increases over MSRP for limited edition models, but even though the 2015 Ford Mustang has been in dealerships for months now – there are still some dealerships adding massive markups on the special 50th Anniversary Mustang GT.
Advertisement

Ford Motor Company introduced the 2015 Mustang in December 2013 and at the New York Auto Show in April 2014, the company introduced the special 50th Anniversary Edition package - 50 years to the day the first Mustang debuted at the 1964 World’s Fair. The 50th Anniversary Edition is based on the 2015 Mustang GT, including literally every possible option, the GT Performance Pack, two unique exterior colors and a rear window louver design that isn’t available on any other 2015 Mustang.

Only 1,964 examples of the 2015 Ford Mustang GT 50th Anniversary Edition were slated for production and with a base price of $46,170, it was comfortably the most expensive of the 2015 Mustang packages. Even though the price was high, the fact that there were only 1,964 of these loaded Mustangs built basically guaranteed that there would be a dealership markup when these cars first began hitting showrooms around the country.

However, the limited edition models have been out for months now and according to Autoblog, several dealerships are sitting on 50th Anniversary Edition Mustang coupes that are sporting markups as high as $22,000 over MSRP.

The $68,995 2015 Mustang GT
This issue came to the surface when an Autoblog reader sent in a picture showing the window sticker for a 2015 Ford Mustang GT 50th Anniversary Edition at their local dealership. The sticker had the expected $46,995 price tag (including destination), but it also has a dealership option sticker stuck next to the printed window sticker. That additional option list includes a $22,000 market adjustment upcharge, bringing the total price of this 1 of 1,964 Mustang to $68,995. Autoblog also reported that another Ford dealership in the Maryland area where the picture had been taken, and that dealership is asking “around $64,000”, so that dealership seems to be marking their 50th Anniversary Edition Mustang GT up by about $18,000.

Don’t Blame Ford for Markups
Big dealership markups have been a popular topic across the various social networks, with fans calling for boycotts of the automakers for allowing dealerships to add their own markups. Everyone should keep in mind that Ford doesn’t sell customers the cars. Ford sells the cars to the dealership and once they have been delivered, the dealership can charge whatever they want for the vehicles.

For instance, if a crazy, wealthy old man wanted to give away every car at his dealership, he could. As the owner of the dealership, he can do whatever he wants with the cars. In the same way, the dealership is free to ask whatever they want for vehicles, as the prices that we see online are the Manufacturer’s Suggested Retail Prices. When a dealership marks up the cost of a new vehicle like the 50th Anniversary Mustang or the new Hellcat Challenger, the automaker hasn’t done anything wrong so blaming the manufacturer for the pricing strategy of a dealership is stupid at best.

In the long run, if the cars weren’t selling for those prices somewhere, the Maryland Ford dealers wouldn’t be trying to get that kind of money. When a dealership uses the rules of supply and demand to adjust a price, they are following a common business practice – not breaking any rules, moral or legal.

Fred Underwood wrote on April 4, 2015 - 6:12pm Permalink
How can you say to not blame Ford Motor Company, they could tell these dealers who are franchised by Ford that they are forbidden to make the company look bad by gouging those who buy from the only American automobile manufacturer to not go to our corrupt Government to bail them out of the mess that was made by inept executives. But it seems there is no one in charge of this company now with any foresight and not enough decency to recognize criminal greed when it is right in front of their eye's. How sad is it that every part of U.S. society is filled with those that do not recognize right from wrong.
Beth Oxford wrote on August 25, 2019 - 10:36pm Permalink
I want a loaded white tricked out 2015 white mustang. Email me when ya find one with reasonable price in great shape. Mileage not too much of a problem, as long as it's not over 130,000...ty
Jonathan wrote on May 9, 2021 - 10:52pm Permalink
How about a black one with 5450 mil