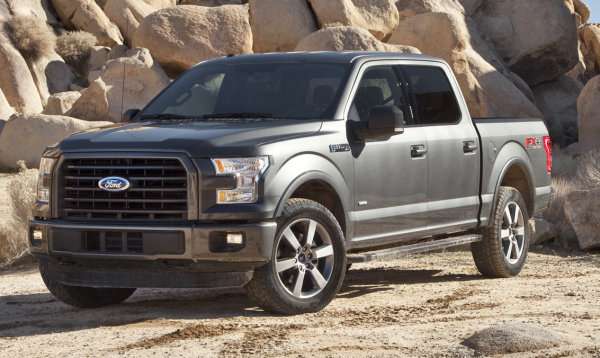 The 2015 Ford F150 is selling so well that the Motor Company isn’t able to adequately meet the demand right now, which is having a negative impact on truck sales as prospective buyers wait for their ideal trucks to arrive – but more 2015 F150s are on the way.
Advertisement

While some skeptics insisted that the aluminum bodied 2015 Ford F150 was doomed to fail, the newest generation pickup has been selling very well. A major metric used by the auto industry in determining how well a vehicle is selling is how long a vehicle sits at the dealership before being purchased and the new F150 is among the quickest moving vehicles in the market right now, averaging just 18 days at the dealership compared to the rough average of 45-50 days this time of year. However, while the 2015 F150 is rolling off of the lot very quickly, the new model is actually hurting sales right now.

F150 Selling Well, Hurting Sales
The problem lies in the fact that inventories for the 2015 Ford F150 aren’t very high, as production at the Dearborn facility has only recently fired up and the early rush for the new trucks is proving to be too heavy for Dearborn to supply quickly. A new model introduction almost always leads to a spike in sales, but right now, there aren’t enough trucks available at the dealerships to meet the demand so some buyers are showing up to buy a 2015 F150, only to leave with their old vehicle because the 2015 F150 that they want simply isn’t available at the dealership. Of course, they can place custom orders, but those are likely to take quite a bit of time due to the same production constraints that are slowing the flow of new F150s to dealership stock.

Basically, those folks who don’t want to wait a very long time for a new 2015 Ford F150 to be built for a custom order leave the dealership with the plan of stopping back in when more arrive. These folks aren’t turned away so much as they are asked to wait and, in many cases, they will wait and buy their new F150 when it shows up in March or April. The problem is that in the short term, this waiting period causes a dip in sales that was very evident through February when Ford F Series sales dropped by 1% even with the early popularity of the new models.

The other “problem” is that with an early shortage of 2015 Ford F150 pickups, dealerships are less likely to deeply discount the old 2014 models. When a new version of a vehicle comes out, the dealership will often apply huge discounts to get the old models out of the way, but with the 2015 F150 being in such short supply, dealerships aren’t looking to move the 2014 models as quickly.

Help is Coming from Kansas City
The good news for those folks who have been repeatedly visiting their local Ford dealership with the hope of finding the perfect 2015 F150 is that the Kansas City truck plant is currently being upfitted to produce the 2015 F150. This added production capacity will help get more trucks to dealership stock around the country, which will allow prospective buyers to find their ideal truck sooner while also helping to fulfill custom ordered trucks. Also, as more 2015 F150 pickups fill up dealership lots around the country, those folks looking for a smokin’ deal on a 2014 F150 will be happy to see dealers working to clear out old inventory to make room for the new models.

The downside is that Kansas City won’t be producing trucks for sale until later this month, so March could be another month where the popularity of the 2015 Ford F150 will lead to a decline in sales when compared to the same month last year. However, once both plants are up to full speed, we are very likely to see a massive sales boom for Ford F150 pickups old and new – proving the anti-aluminum skeptics wrong right away.