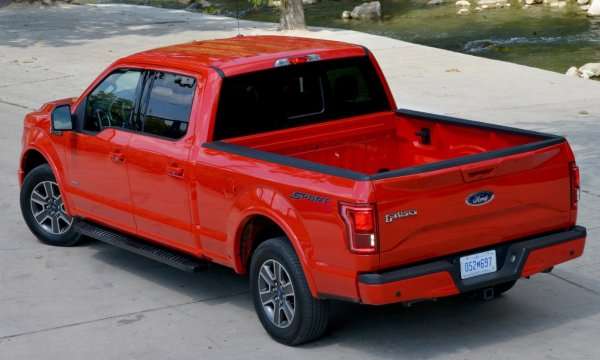 Ford Motor Company has issued a voluntary recall of 3,218 examples of the 2015 Ford F150 pickup over a concern that the front seatbelt pretensioner system may not be assembled correctly – leading to a greater chance of injury in the event of an accident.
Advertisement

This new F150 recall from Ford Motor Company applies to the 2015 Super Crew pickups built at the Dearborn Assembly Plant between January 22nd, 2015 and March 17th, 2015. The company believes that 2,590 of these new F150 pickups are in the United States, while 555 are in Canada and the other 73 are in Mexico.

If one of these 2015 F150 Super Crew pickups is involved in an accident, there is a chance that the pretensioner will not adequately protect one of the folks seated up front.

The good news is that there have not been any reports of this seatbelt failure occurring in the real world, so there have been no injuries as a result of this limited F150 problem.

The Fix is Quick and Easy
The other good news (in addition to the lack of accidents of injuries) is that the fix for this 2015 Ford F150 recall should be quick and easy. The dealership technician will replace the driver and front passenger safety belt retractor / pretensioner assembly – all at no cost to the customer, of course.

Ford’s announcement of this recall doesn’t offer a timeframe for when the notices will begin going out, but if you own a 2015 F150 pickup with the Super Crew cab configuration it might be a good idea to check with your dealership to see if your truck is included in this new recall.

At least the critics can’t blame the aluminum body on this issue.