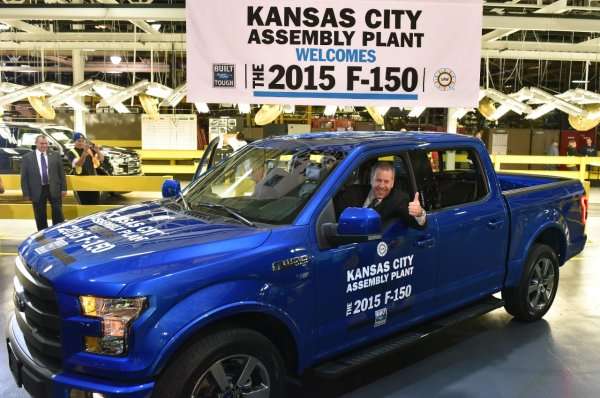 The availability of the 2015 Ford F150 pickup at dealerships around the country is about to get a whole lot better, as this is the first full week of production for the new aluminum bodied F150 at the Kansas City production facility – allowing the Motor Company to better meet the early demand for the 2015 models.
Advertisement

Last week, we had a piece here on TorqueNews discussing the problem for Ford that the 2015 F150 was so popular that the early demand had caused a slowdown in sales. Through the first few months of 2015 F150 sales, Ford’s Dearborn truck plant hasn’t been able to get the new F150 in enough colors and trimlines to dealerships around the country, forcing some people to wait for their ideal truck to arrive at their local dealership. Ford expected this problem, which is why the company spent over a billion dollars to upgrade the Kansas City Assembly Plant to build the new aluminum bodied F150, but the upgrades to that facility were lengthy enough that when the 2015 F150 went on sale, the KC plant wasn’t ready to build the new trucks.

Well, the Kansas City plant upgrades are complete and starting this past Friday, the KC facility was ready to begin building the 2015 F150, making this week the first full week of 2015 F150 production at both of the Ford truck plants.

More 2015 F150s, More Discounts
Right now, the demand for the 2015 Ford F150 is so high that trucks are only sitting on lots for an average of about 18 days, whereas the industry average in the US is around 45 days. With this high demand, dealerships are less likely to bend on the pricing, since one person who wants a discount will be turned away for a buyer willing to pay MSRP. As more trucks reach dealerships, the new F150 will spend more time on the lots and as a result, dealerships will be more willing to cut money from the final sale price.

Also, with the 2015 F150 being in such high demand and such short supply, dealerships aren’t willing to discount the 2014 models still on the lots. Once the 2015 F150 is abundant at dealers all over the country, there will be a push to get the 2014 F150 pickups out of the way and to do that, we will see big discounts on those “old” trucks.

Of course, those prospective 2015 Ford F150 buyers who have been unable to find the proper color or configuration that fits their needs, this increase in production capacity will lead to many more trimlines in dealer stock.

Sales Boom Cometh
Once the Kansas City and Dearborn truck plants are building the 2015 Ford F150 at their fullest capacities and inventories around the country are nice and fat, we are certain to see sales numbers for the Ford F Series that could near record levels. Based on the early popularity of the 2015 F150, having more models with lower price tags and dealer discounts will cause a huge jump in new model sales. Those folks looking to pay under MSRP for an lower production trimline will finally get their chance, as will the buyers waiting for a big discount on the 2014 leftovers sitting around dealerships right now.