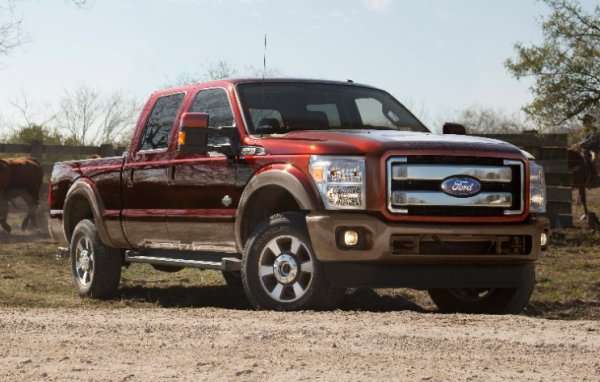 While we know for sure that the 2015 Ford F150 will feature a variety of weight saving aluminum body components including the rear cargo box, there has been some speculation as to whether the heavier duty F250 and F350 will feature similar aluminum panels – but I don’t think that there is any reason why the next gen Super Duty pickups wouldn’t have the same construction as the upcoming F150.
Advertisement

When Ford introduced the 2015 F150 at the 2014 North American International Auto Show with a collection of aluminum body panels, it caused two reactions. The first was the group of critics who insisted that aluminum cannot be strong enough to stand up to the abuse of a pickup truck. The second was another group of people who wondered if Ford might be able to use what they learned in making the 2015 F150 lighter without making it weaker to help cut down the weight of the next generation Super Duty pickups. The folks in that second group saw their question come to the surface when a spyshooter reportedly stuck a magnet to the side of a camouflaged next gen Super Duty test truck and it did not stick – suggesting that the next Super Duty will indeed have aluminum panels.

While the vast majority of prospective buyers of new heavy duty pickups likely don’t care much about fuel economy, trimming weight from the 2015 Ford F150 and the future F250/F350 Super Duty pickups can also make those trucks more capable and when it comes to the heavy duty truck market – added capabilities can go a long way. Removing a couple hundred pounds from the Super Duty pickup would essentially allow owners who haul and/or tow that much more weight with everything else being equal while also getting better fuel economy – albeit a minor improvement in such a large vehicle.

Less Weight Cannot Hurt the Next Super Duty
When it was announced that the aluminum panels on the 2015 Ford F150 would make the truck hundreds of pounds lighter than a similar truck using all steel panels, some were concerned that the new F150 will simply be too light. Even though Ford will most certainly add the various helpers like trailer sway control, trailer brakes and the like to ensure that the 2015 F150 pulls, hauls and does everything else better than the 2014 models, some folks are concerned that the lightweight F150 will lose some functionality. They have somewhat of a point, as towing a 10,000lb trailer with a truck that is a little heavier can provide improved control in different situations so if the 2015 F150 is too light, some buyers might not like how it feels when it is put to work.

Fortunately, those concerns about the truck being too light doesn’t really apply to the Ford Super Duty lineup as much as it does the F150 simply because the F250 and F350 are much heavier trucks to begin with. Even if Ford managed to cut more weight from the next generation Super Duty than they did to the 2015 F150, both the F250 and F350 are going to be among the heaviest new vehicles sold in America. While the weight varies a great deal across the Super Duty lineup, a quick Google search shows that the F350 easily weighs over 7,000 pounds while the F150 typically weighs around 2,000 pounds less than that with numbers ranging from the mid 4,000 range to the upper 5,000 range. Cutting 700 pounds from the F150 could, in theory, push the curb weight below 4,000lbs and that seems extremely low for a full size truck that is capable of so much hard work. On the other hand, cutting 700 pounds from the current F350 only drops the weight into the mid 6,000lb range – hardly making it light enough to worry about being “too light” to move the heavy loads.

In other words, using aluminum body panels to trim the weight of the next generation Ford Super Duty will not have any negative impact on the capabilities of the F250 and F350 so consumers should be happy to hear that lightweight body panels might be coming to the Super Duty lineup very soon.

Aluminum Will Make the 2015 F150 Just as Tough
Ford Motor Company has gone to great lengths to test the aluminum body panels of the 2015 Ford F150 – going so far as to use aluminum cargo boxes on a few select 2014 F150 pickups owned by hardworking fleets to see how they stand up to real abuse. Ford found that there were no complaints about excessive damage to the aluminum panels and, best of all, any scratches on the bedsides didn’t lead to rust since there isn’t any steel under the paint to oxidize. Realistically, while Ford obviously wants to get the curb weight of the 2015 F150 as low as possible for very clear reasons, the company knows very well that they cannot make a “softer” truck.

Although Ford secretly used aluminum panels on current F150 pickups and not Super Duty models (at least none that we know of, yet), those half ton pickups were put to the ultimate test by a construction company, a utility company and a mining company. There is little doubt that those half ton trucks faced just as much abuse as a heavier duty truck on a similar job site so if the aluminum cargo boxes held up to the rigors of mining and construction work in F150 form – I would expect the lightweight material to be just as useful on the F250 and F350.

Of course, with the next generation Ford Super Duty pickup at least a year away, it could be some time before we get any official word from the Motor Company, but my safe money says that the next generation F250 and F350 will both benefit from the advancements in Ford’s aluminum body panel development.