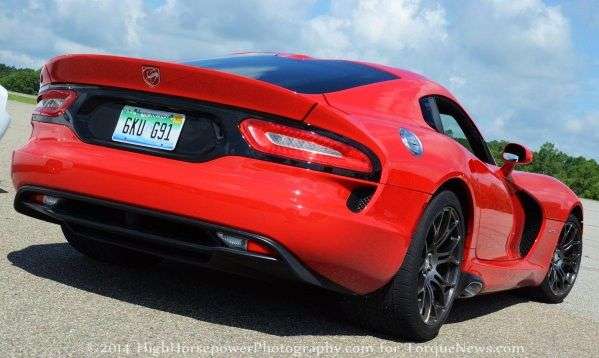 Thanks to the same collection of information that revealed that there will be a Hellcat powered Dodge Charger, we have learned that the 2015 Dodge Viper SRT will come with 5 extra horsepower in the new model year – bringing the total output up to 645 horsepower.
Advertisement

The biggest bit of news for the 2015 model year Viper is that the record setting supercar will return to the Dodge brand, but those prospective buyers who are less concerned with semantics will be far more interested to learn that the 2015 Dodge Viper SRT will get a touch more power. It is only five horsepower, but five new horsepower is better than no new horsepower, right?

Chasing the 2015 Corvette Z06
When the 2013 SRT Viper was introduced, it packed 640 horsepower and 600lb-ft of torque – just enough power to best the Chevrolet Corvette ZR1. Of course, the ZR1 was discontinued for the 2014 model year, leaving the Viper as the only “new” American supercar available, but starting in 2015, the Viper will have to contend with the awesome new 2015 Corvette Z06. General Motors offered early estimated minimum power figures of 625 horsepower and 635lb-ft of torque – which would have left the Viper as the most powerful American supercar – but that proved to not be the case when the official Z06 figures of 650 horsepower and 650lb-ft of torque were released.

Those Corvette Z06 figures have allowed GM to claim the title as the most powerful American supercar by a pretty significant margin. The Chrysler Group stole some of GM’s thunder by introducing the new Dodge Challenger SRT Hellcat with 707 horsepower, but the company has also added some more ponies to the Viper – but oddly they didn’t add enough power to even up the Corvette’s advantage. With 645 horsepower, the Viper is still a touch behind the Z06, but we know that no one is going to complain about a few extra horsepower.

No Word on How This Power was Made
The information that the 2015 Dodge Viper SRT will pack 645 horsepower rather than 640 comes from an Standard of Automotive Engineers (SAE) document so this information is kind of official…but it’s not official from Chrysler. This means that we don’t have any information as to how the SRT engineers squeezed the extra power out of the 8.4L V10, but I would guess that it is something very, very simple. Figure that with 5 more horsepower, the company hasn’t added enough to really justify a price increase so the company likely didn’t make any changes to the 2015 Viper that will raise their cost of the car. Something like a slight adjustment in the engine control computer could add some power without adding any cost. On the other hand, if they have changed a component, I would expect something like a slight revision in the air intake setup or perhaps a minor change in the exhaust system.

The 2015 Dodge Viper SRT will hit dealerships later this year and when they do, we can expect a full complement of information on the Mopar supercar – including details on where the extra horsepower came from and, with any luck, some other goodies that will allow the Viper to pose a challenge to the new Corvette Z06.

ih wrote on July 29, 2014 - 10:56pm Permalink
Dodge should let the Viper die. There are at least 650 unsold cars on lots..... it's over.
Patrick Rall wrote on July 30, 2014 - 10:32am Permalink
I think that it would be a far better idea to NOT just build and build and build Vipers with no buyers lined up. They are selling, just not well enough to warrant the high rate of production (or what was the high rate of production). When you are selling 50 cars a month, there is really no need to be building 200 a month. After all, this isnt a minivan that can sit on a lot and eventually someone will buy it.
Jim Hagen wrote on August 13, 2014 - 3:54pm Permalink
The Viper is a throwback in so many ways. It is a car that only a few collectors asked for, built to mimic a car that was competitive 10 years ago. Somehow they remembered how to build in the old faults(cramped cab, hot and noisy exhaust and twitchy handling), and none of the current day necessities, like adequate brakes, paddle shift, workable electronic stability and handling control.. The race car Viper is no more a viper than a current NASCAR is its namesake. For 100K plus, either just build the racing version and make it street leagle, or make an affordable everyday car with an automatic. I hear that the hellcat may have a transmission for you.