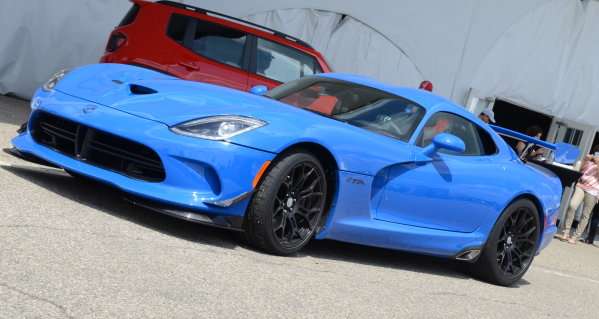 The embargo on 2015 Dodge Viper information has finally lifted, meaning that I can now talk about the return of the Viper to the Dodge brand, the two new colors, the new GT trimline and the improved aerodynamics of the Time Attack package – all of which combine to improve an already stunning American supercar lineup.
Advertisement

The 2015 model year is an interesting one for the mighty Viper. That is because the Viper has gone from being a Dodge brand product from 1992 through 2010 to being an SRT product (not Dodge) for 2013 and 2014 to returning to the Dodge Viper for the 2015 model year. Having a car leave a brand after 19 years to join a new brand for two years only to rejoin that initial brand is very unusual…but that is what the Chrysler Group really needed to do with the Viper. Transitioning the Viper from Dodge to SRT was a dismal failure – one that annoyed Mopar enthusiasts – so it was a very wise move to put the Viper back in the Dodge brand even though it likely won’t have a huge impact on sales in either direction.

“The Dodge brand is committed to keeping the ultimate American-built exotic supercar as unique as ever by offering new packages with some of the most exclusive and high-quality content we’ve ever produced in the Viper,” said Tim Kuniskis, President and CEO — Dodge Brand, SRT (Street and Racing Technology) Brand and Fleet Operations, Chrysler Group LLC. “Our Dodge Viper customers crave new and exclusive options, which motivates our design and engineering teams to create special builds that continue to deliver our successful high-performance formula for street and track driving, while allowing our enthusiasts to stand out in their world-class supercars.”

In addition to the return to the Dodge brand, the 2015 Viper receives a number of minor-yet-significant changes for the new model year that should help to improve sales. I learned about these changes back in July but with the exception of the added power, these revisions for the 2015 model year have been under embargo. Now that the embargo lifted, it is time to talk about the changes that really matter for the 2015 Viper – including new colors, a new special edition package, a new full production trimline and the newest version of the Viper Time Attack.

New Colors and a New Color Based Package
The 2015 Dodge Viper will benefit from three news colors – one of which is part of a limited edition package. First up, the base model Dodge Viper SRT is available in Yorange, which is literally a mix of yellow and orange (as shown just below this paragraph). Great color with a questionable name. Next, the Viper GT and GTS for 2015 will be offered in the new Stryker Purple hue that is so dark that it might appear black in some lighting, but direct sunlight brings out the fact that this is a deep metallic purple. Finally, the new Ceramic Blue hue is part of the 2015 Dodge Viper GTS Ceramic Blue Limited Edition package that comes with black exterior stripes, black Rattler wheels and a unique collection of premium interior goodies with only 40 units planned for production. The company has not offered up an image of Ceramic Blue, but they have shown off pictures of the 2015 Viper in Competition Blue – so I expect Ceramic Blue to differ from the fan-named Competition Blue shown above on the new Viper T/A.

Meet the Dodge Viper GT
New for 2015 – as expected – is the new Dodge Viper Grand Touring (GT). The GT package is based on the entry level Viper SRT, but it sports the adjustable suspension system and many of the interior goodies of the GTS package. This package is designed to offer better performance than the base model Viper SRT while costing a bit less than the top of the line Viper GTS which comes with more features that do not improve performance. Pricing has not been announced, but expect it to sit between the Viper SRT and the Viper GTS. If you want the look of the base model Viper with the performance and interior luxuries of the Viper GTS – the Grand Touring package is for you. Below is a look at the new Viper GT in Stryker Purple. Viper T/A 2.0
Finally, the Time Attack package is back for the 2015 Dodge Viper and it follows the same track-purposed design theory as the 2014 Viper T/A. However, the 2015 Viper T/A 2.0 comes with a new, larger rear wing (that looks like something off of the previous Viper ACR) and new front dive planes that will help improve high speed handling. Between the new wing and the dive planes, the 2015 Viper T/A offers 400 pounds of downforce at 150 miles per hour while the 2014 Viper T/A offered only 278 pounds of downforce. The 2015 Viper T/A will be available in Yorange, Competition Blue and Venom Black with only 96 examples slated for production. Surprisingly, the press release with all of the information on the 2015 Dodge Viper doesn’t include images of the 2015 Viper T/A, the new Stryker Purple exterior paint, the new Yorange exterior paint, the new Ceramic Blue exterior paint or the Viper GT. Luckily, I was in attendance at the Chrysler new product preview back in July and I got pictures of the Viper GT in Stryker Purple, the Viper SRT in Yorange and the new Viper T/A 2.0 in Competition Blue. Click here for a look at each of those 2015 Viper models in our gallery!

i wrote on September 2, 2014 - 11:11pm Permalink
ummmmmm looks like they are just trying to go through parts that they have then its curtains for the car