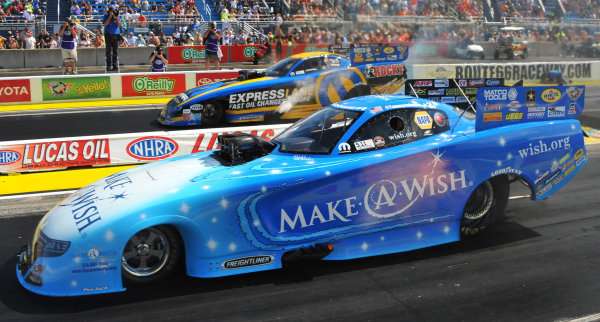 The teams of the NHRA Mello Yello Drag Racing Series headed to Route 66 in Chicago this past weekend and for the 10th time in 13 events, a 2015 Dodge Charger R/T won the funny car class – continuing the stunning domination of the class by Don Schumacher Racing.
Advertisement

The 2015 Dodge Charger funny car was introduced ahead of the 2015 NHRA season, with Don Schumacher Racing fielding four teams in the funny car class with Matt Hagan, Ron Capps, Jack Beckman and Tommy Johnson Jr handling the driving duties. The 10,000 horsepower Charger has proven to be the beast of the class, with Schumacher Dodge race cars winning 10 of the first 12 races this season. However, while Hagan has won four races, Beckman has won three races and Capps has won a pair of Wallys this season, teammate Tommy Johnson Jr hasn’t visited the winner’s circle – but that all changed at the Lucas Oil Nationals this past weekend.

Qualifying
Coming into the 13th event of the 2015 NHRA season, Don Schumacher Racing had won 9 of the first 12 funny car finals so it was easy to call the new Dodge Charger funny car teams the odds-on favorites when the teams headed to the Windy City area for the Lucas Oil Nationals.

In the first round of qualifying, the Camaro teams of Courtney Force and Robert Hight turned the top times, while Jack Beckman turned in the 3rd best time. In that first round, Capps took the 5th spot, Tommy Johnson Jr started off in the 7th spot and Matt Hagan turned in a disappointing 15th. There were also two 2014 Dodge Charger funny car teams, including John Hale and Justin Schriefer, but those drivers were only able to turn in the 16th and 18th spots, respectively.
Hagan got off to a great start in round 2, jumping up into the top spot, but by the end of the round, he had slipped to 9th. Tommy Johnson Jr jumped up into the 3rd spot, Capps maintained his 5th spot with another strong run, Jack Beckman slid to 10th, Hale was 15th and Schriefer continued to sit last.

Round 3 was packed with drivers pushing for lightning quick runs, but settling for poor times. Hagan, Beckman, Capps and Hale all had throwaway runs, while Johnson turned in a good time – but not good enough to hold his 3rd spot. Johnson would start 4th, Capps was 6th, Hagan was 11th, Beckman was 12th and Hale was 16th.

Eliminations
In the first round, the most interesting matchup was the one between Ron Capps and Matt Hagan – teammates who are battling for the series championship. Hagan jumped out to a slight lead at the line, but when Capps smoked the tires, his day was over. Jack Beckman beat Courtney Force, Tommy Johnson Jr beat Brian Stewart, and John Hale lost to fast qualifier Cruz Pedregon.

In round two, teammates Johnson and Beckman went head to head and while Beckman had the starting line advantage, Johnson drove around to take the win. Matt Hagan turned a starting line lead into a sound beating of Tony Pedregon and Mustang driver Tim Wilkerson (one of the two non-Dodge drivers to win this season) beat the Toyota of Del Worsham. Finally, top qualifier Cruz Pedregon and his Toyota knocked out John Force (the other non-Dodge driver to win this year)and his Camaro to advance to the final four.

In the final four, Tommy Johnson Jr took on Cruz Pedregon and when Johnson’s Charger took the starting line advantage, he was able to hold off Pedregon’s lightning quick Camry. In the other half of the bracket, Matt Hagan took the lead at the line over Tim Wilkerson and while the Mustang went quicker, Hagan’s reaction time advantage gave the Dodge the win.

This setup yet another all-Dodge final round for the funny car class.

The Finals
The final round setup an exciting shootout between Matt Hagan and Tommy Johnson Jr. Hagan has four wins this year and leads the championship run, while Johnson is the only driver in Don Schumacher Racing not to have a win during 2015. Hagan is 4-0 in final rounds this season and in head to head matchups in the past, Hagan has beaten Johnson in 7 of their 8 meetings – including 2 final round runs where Hagan took the win. These same two drivers met in the finals at the 2014 running of this very event and Hagan took the win.

Johnson had lane choice and that would pay off, as Hagan only got a few feet from the starting line before smoking the rear tires hard. Johnson made his slowest pass of the event, but it didn’t make any difference as he had a cruise to his first win of the season.

This win gave Johnson his first of the season and Don Schumacher Racing its 10th in 13 events. Hagan continues to sit atop the championship standings with Capps second and Beckman third.