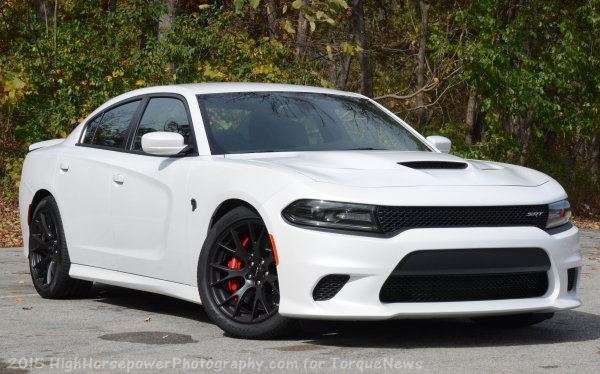 Since the 2015 Dodge Charger SRT Hellcat was introduced back in August as the quickest, the fastest and the most powerful 4-door sedan in the world, there have been some people who questioned the top speed capabilities, but today we have an official video of the 707hp Charger topping 206 miles per hour during testing.
Advertisement

When the Chrysler Group announced that their 2015 Dodge Charger SRT Hellcat would go 204 miles per hour, making it the fastest 4-door sedan in the world, it was a very big deal in the performance car world. This is the kind of claim that an automaker would never make if the car wouldn’t actually run the numbers, but skeptics still insisted that there had to be some sort of trickery involved with a big, heavy sedan going 204 miles per hour. It had to be downhill. It had to be with a ton of wind behind it. The excuses went on and on.

Fortunately, the Chrysler Group has met all of that skepticism with the best proof possible – videos of the top speed record-setting run with a very clear explanation of how that record was recorded.

How Top Speed Records are Established
There seems to be a great deal of misunderstanding about how an automaker comes to an official top speed, particularly with a vehicle like the 2015 Dodge Charger SRT Hellcat. Top speed verification runs don’t take place in an area like the Bonneville Salt Flats, where cars can rely on a near-endless area in which to build speed while getting some assistance from the conditions.

For a car to make an official top speed record run, they need to make two runs, one in each direction on the same stretch of track, and then taking an average of the two runs. Doing it this way allows automakers get a more realistic top speed figure, as the average figure helps to represent what the car in question can do without a tail wind. This is the same process used by the Bugatti Veyron in establishing the record for the world’s fastest production car and the fact that Hennessey did not follow these steps is why the Venom GT has not been recognized as the world’s fastest.

When the Chrysler Group set out to see just how fast the 2015 Dodge Charger Hellcat would go, they used these standards so that in the event that the Hellcat sedan hit a very high top speed – they would be able to confirm the top speed as an official record.

The Record Runs
While the Chrysler Group didn’t introduced the 2015 Dodge Charger SRT Hellcat until mid-August, the record-setting run actually took place on a cool morning in July. The team took the 707hp sedan to the 7.5 mile test track, where a pair of 3 mile straightaways would allow the Charger to reach its top speed in safe confines. There were fluctuating winds of 8 to 14 miles per hour, which made the two run average that much more crucial.

On the first run with the tail wind, the 2015 Dodge Charger Hellcat hit a whopping 206.9 miles per hour. Mind you, we aren’t talking about gale force winds, but the wind was pushing the car down the track a bit. They then turned the Charger around and made another run, this time going into the wind. This run was slower, but only by a bit, with a top speed of 202.2 miles per hour. When you average those two numbers out, you get an official top speed of 204.55 miles per hour.

Without further delay, watch the video below of the 2015 Dodge Charger SRT Hellcat blasting down the track at over 200 miles per hour and if you were a naysayer – prepare to snack on your words.