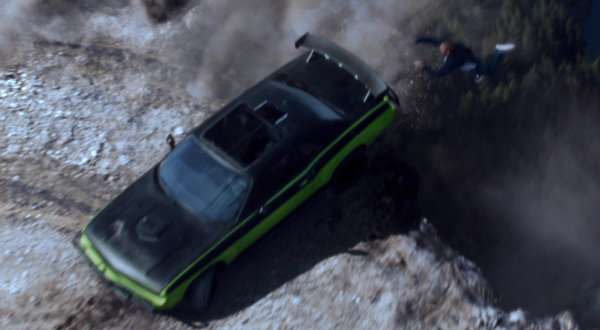 Fast and Furious will see its 7th and final chapter on April 3rd when Furious 7 hits theaters around the US, with the 2015 Dodge Charger and Challenger joining the 2015 Jeep Wrangler and a classic Dodge Charger to represent the Chrysler Group very well in the action packed go-fast flick.
Advertisement

Chrysler Group vehicles have played a big role in the Fast and the Furious series since the first movie came out back in 2001, when Vin Diesel raced into the heart of every girl who loves a bad guy in a big, bad supercharger classic Dodge Charger. However, with Furious 7 drops next month, it will have the biggest dose of Chrysler Group products that we have in the series with muscle cars new and old being featured alongside the Jeep Wrangler.

The Chrysler Products of Furious 7
If you know anything about the Fast and Furious series, you know that this 7th installment will feature an incredible collection of beautiful vehicles from every imagination genre. From super-tuned Japanese sport compacts to American muscle cars to massively modified trucks and SUVs, this movie will have a little bit for everyone who loves a specific group of the automotive world. However, where past movies have often focused more on foreign performance cars with a mix of American models, it looks like Furious 7 field will be far more heavily comprised of Americans vehicles.

Included in the trailer (which you can watch below), the Furious 7 car cast will include the 2015 Dodge Charger R/T, the 2015 Dodge Challenger R/T, the 2015 Jeep Wrangler Unlimited and what looks to be a 1970 Dodge Charger R/T. The trailer also shows a 1972 Plymouth Barracuda incorrectly badged as an AAR model, a 2015 Dodge Viper, a Ferrari 458, a Bugatti Veyron, an Audi R8 and a handful of other, less exciting vehicles that should make Furious 7 the hottest car movie of the 2015 summer.

Expect Outrageous Antics
As is the case with the driving antics in every other Fast and Furious series movie, Furious 7 will feature plenty of outrageous, high flying stunts – literally. As you will see in the trailer below, Furious 7 has a scene where Vin Diesel, Paul Walker, Ludacris and the rest of the crew jump out of a jumbo jet…in their vehicles. Diesel’s classic Charger, the new Wrangler, the new Challenger R/T, Walker’s Subaru WRX STI and a classic Camaro all fall out of a plane from very high altitude and plummet towards the earth until parachutes mounted in the roof of each vehicle deploy, allowing them all to land safely…ON the road. It is amazing, and if that is what they were willing to show in the trailer, we are likely to see even crazier stunts in the whole movie.

Paul Walker’s Final Furious Movie
Sadly, it looks as though Furious 7 will be the final movie in the series, after star Paul Walker was killed when business associate Roger Rodas crashed the Porsche GT supercar in which they were both traveling. Walker had already begun filming Furious 7 when he lost his life and with the help of Walker’s brothers, who stood in as body doubles for the final portions of the filming process, Universal Studios was able to complete the 7th movie in the series.

There have been rumors that there will be more Fast and Furious movies after Furious 7, but the rest will be hard to compare without Paul Walker. This movie is likely to be the biggest with it being Walker’s last, so the high performance Dodge products will be in front of a great many moviegoers who are looking to see one of the greatest car-guy actors of all time in his final role.