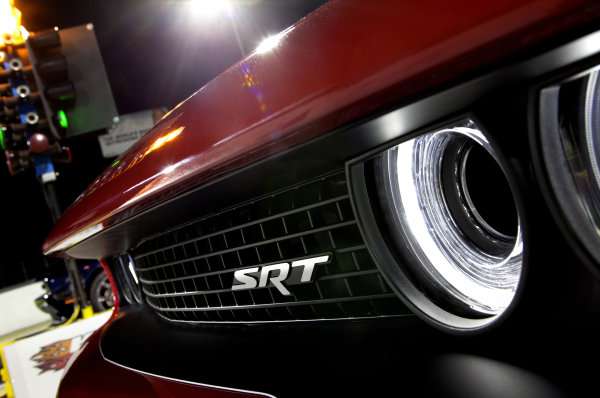 When the Chrysler Group announced last week that the 2015 Dodge Challenger SRT Hellcat would pack an incredible 707 horsepower along with a beefier 8-speed automatic transmission, some were concerned that there wouldn’t be a manual transmission for the Hellcat – but I am happy to report that the most powerful American production car ever will indeed have a manual transmission option.
Advertisement

The 2015 Dodge Challenger SRT Hellcat is powered by a supercharged 6.2L Hemi that delivers 707 horsepower and 650lb-ft of torque, making it the most powerful American production car ever and the 6th most powerful street legal production car in the world today. In addition to having more power and a rear seat, one vital place where the 707 horsepower Challenger will have a big advantage over the SRT Viper is in the fact that it will be available with an automatic transmission. The Viper has only ever been offered with a proper manual gearbox, so those folks who have a physical issue which prevents them from driving a manual transmission – or those folks who are just plain to uncoordinated to deal with the third pedal – have not been able to enjoy the ultimate in Mopar Performance.

That all changes with the 2015 Challenger SRT Hellcat as it will feature an 8-speed TorqueFlite automatic transmission that will make it easier to drive and more efficient than those cars fitted with the 6-speed manual gearbox. It just might offer better performance as well.

TorqueFlite + 707hp =Massive Fun for Everyone and More MPGs
While there are folks out there who believe very strongly that every performance car should come with a manual transmission, the recent advances in automatic transmission technology have effectively done away with the downsides once associated with self-shifting gearboxes. While the automatic transmissions still “eat up” a little more power between the engine and the wheels, modern automatics are far less parasitic than past models while also providing lightning quick shifts that are hard for an average person to execute with a traditional manual transmission. The Hellcat Hemi and TorqueFlite 8-speed combination will come with paddle shifters that will give the driver a great deal of shifting control, while providing super fast shifts under hard acceleration. It takes skill to master a quick shift with a manual transmission so getting the most out of something like the SRT Viper takes more effort than it will with the Hellcat Challenger with the 8-speed.

In addition to making it easier to make use of the 707 horsepower, the new 8-speed automatic transmission will offer Hellcat Challenger owners improved low end acceleration and highway fuel economy. Having 8 speeds to play with allows the engineers the luxury of making the numerically lower gears more aggressive for better low end acceleration.

For example, the 1-5 gears can be far more aggressive with the new 8-speed than a 6-speed, since the 6-speed automatic would need the 5th gear to lead into a fuel friendly 6-speed. However, with 7th and 8th gears, the 1-5 gears are very aggressive while 6th, 7th and 8th gears are designed to keep the engine RPMs lower and fuel economy figures higher. For some Mopar or American performance car lovers, driving the ultimate Chrysler Group performance car – the Dodge Viper – is out of the question due to an inability to deal with a manual transmission. The Viper has only ever had a manual transmission, so those folks who are physically unable to drive a manually shifted car have not been able to drive that beast. The Challenger SRT Hellcat will allow all of those folks the option of finally driving the most powerful Mopar performance car… and the most powerful American car ever.