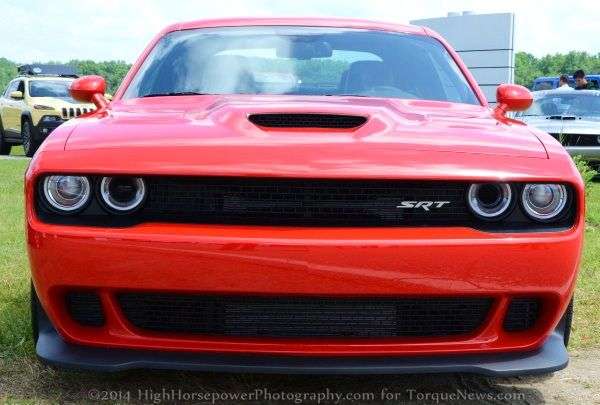 The Chrysler Group has just announced the official specs for the 2015 Dodge Challenger SRT Hellcat and with a shocking, stunning and absolutely amazing 707 horsepower and 650lb-ft of torque, the supercharged Challenger is the most powerful American production car ever – packing significantly more power than anything ever offered for street use by General Motors or Ford Motor Company.
Advertisement

Since the new 6.2L Hellcat supercharged Hemi was introduced a few months back, we have speculated heavily as to what kind of power it would produce under the hood of the 2015 Dodge Challenger SRT. The estimates over the past year have generally put the numbers in the range of 600-650, but we expected that the company would have the Challenger Hellcat making less power than the mighty SRT Viper that has 640 horsepower. Based on that, I expected that the Hellcat would make around 625 horsepower. I was wrong. Way wrong…and I don’t know that I’ve ever been more excited to be so wrong.

The 2015 Dodge Challenger SRT Hellcat isn’t just another muscle car – it is now THE muscle car.

The Dodge Challenger is the Most Powerful American Car Ever
In the world of high performance cars, few vehicles are more well known around the world for featuring pure, brute horsepower than American muscle cars so it is a pretty proud title for the 2015 Dodge Challenger SRT Hellcat to officially be the most powerful muscle car of all time. Previously, the most powerful American muscle car was the current Ford Shelby GT500 Mustang with 662 horsepower and 631lb-ft of torque – which the Hellcat Challenger crushes. Even among the monster big blocks that were used in the American muscle cars of the 1960s and 1970s that were unmolested by emission regulations, none of them offered anywhere close to 707 horsepower… and I’m talking about the real world numbers and not the official numbers that were known to be vastly underrated.

The Challenger is Among the World’s Best Supercars
With 707 horsepower, the 2015 Dodge Challenger SRT Hellcat ranks 6th in the world among production cars, trailing only LaFerrari, the McLaren P1, the Porsche 918, the Lamborghini Veneno and the Ferrari F12 Berlinetta – a group of cars which range in price from $319,000 to $4,000,000. Also, with 650lb-ft of torque, the Challenger Hellcat has more twisting power than all of those supercars except for LaFerrari and the McLaren P1. The Challenger SRT Hellcat is more powerful in terms of both horsepower and torque than the Lamborghini Aventador…a car which costs almost $400,000. I have included the top 11 most powerful cars in the world right now, going with 11 rather than 10 so that I can include the SRT Viper for reference.

Of course, I should point out that the 2015 Dodge Challenger SRT Hellcat is heavier than any of the cars on the list below, but with such awe-inspiring power outputs 2015 Challenger owners will be able to at least give someone in a new Lamborghini a good race…if not beat the raging bull.

In introducing the 2015 Dodge Challenger SRT Hellcat with 707 horsepower and 650lb-ft of torque, the Chrysler Group is showing that they might not have the bestselling muscle car in America, but they are very capable of making the most powerful muscle car. More so, it will be difficult for General Motors or Ford Motor Company to come up with a street legal engine that will beat the Hellcat so maybe – just maybe – this monster Hemi will serve as the most powerful muscle car engine of all time.

The 2016 Ford Shelby GT350 Mustang and the next generation Chevrolet Camaro are expected to arrive within the next couple years so both of the other Detroit automakers have a chance to reclaim the title of having the most powerful sports car on the market…but with 707 horsepower, it will be a daunting task to knock off the Hellcat. Of course, the 650 horsepower, lightweight Corvette Z06 could challenge the Hellcat and you can read more about that by clicking here.

rdsOLDschool wrote on July 2, 2014 - 12:30am Permalink
The only thing missing is that you need to Man Up with your claim that the Z06 will never lose to the hellcat. You kind admit that the hellcat beats the Z06. Just saying. You did say the hellcat will Never win. It would be nice to see if you would take that back and say that you were wrong. If your Man Enough!
Patrick Rall wrote on July 2, 2014 - 1:33pm Permalink
I will absolutely address that in an upcoming piece. Just to be clear, I said that the Hellcat Challenger wouldnt beat the Z06 head to head, as in racing. The Hellcat Challenger has a ton more horsepower...but it will also weigh somewhere in the area of 1,000 pounds more more than the Z06 so the Vette still might have an advantage. Really, we are talking about a 3300lb car with 650hp and a car that has 707hp, but will likely weigh at least 4,100lbs if not a few hundred more.
Glenn wrote on July 2, 2014 - 11:53pm Permalink
I read elsewhere that the weight of the Challenger Hellcat was 4400lbs. The stock SRT8 is 4200, so this is not at all unlikely. If this is true, then the Vette, and the Shelby should still take it.
Patrick Rall wrote on July 2, 2014 - 2:48pm Permalink
For those calling for a new comparison piece between the Helllcat and the Corvette Z06, I have added a link to the end of the piece about to my revisited Hellcat versus Z06 article.
chris wrote on July 3, 2014 - 12:04am Permalink
Hellcats a nice car, but dnt forget about the Shelby 1000.
jim wrote on August 22, 2014 - 2:23pm Permalink
i wouldn't think it impossible for mopar to offer a factory lightened body for this drive-train.