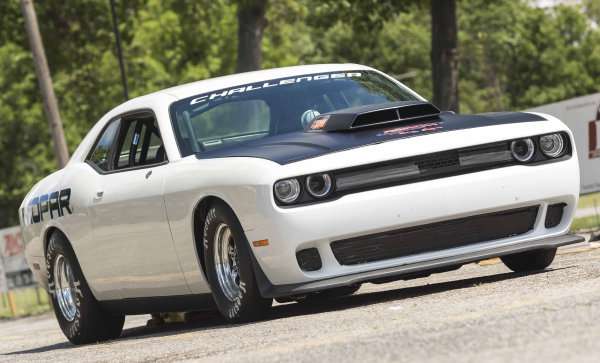 The 2015 Dodge Challenger Drag Pak Looks Like a Hellcat...but Isn't

The Chrysler Group has offered up the first information and images of the 2015 Dodge Challenger Drag Pak, a purpose built race car that is based closely on the production road model right down to the Hellcat-like front end, but rather than the supercharged 6.2L Hemi, the 2015 Drag Pak test car is powered by a naturally aspired 426 cubic inch race Hemi.
Advertisement

Over the past few years, the Dodge Motorsports division and the folks from SRT have teamed up to build a limited number of Dodge Challenger Drag Pak units. These purpose built racecars were not legal for road use, but they came equipped with all of the features required to conform to the NHRA and IHRA Stock and Super Stock production-based drag racing classes. Engine options over the past 5 years have included the 5.7L Hemi, the 6.1L Hemi and the 512 cubic inch Viper V10 – all of which have helped power some very fast and very successful drag racing programs in the last half decade.

The Chrysler Group is celebrating the 50th anniversary of the 426 race Hemi in 2014 so what better way to commemorate one of the most successful drag racing engines ever than to roll out a new factory drag racing package with the modern incarnation of that engine…and that is exactly what Dodge has done with the 2015 Challenger Drag Pak. While the front end of the 2015 Challenger Drag Pak might look an awful lot like the new SRT Hellcat models, this track ready beast is designed to dominate the quarter mile with a naturally aspirated 426 cubic inch Gen III race Hemi rather than the new supercharged 6.2L V8…although things could certainly change before the company begins selling these race-only muscle cars to the public.

Oddly, the first 2015 Dodge Challenger Drag Pak test car still wears the old (pre-2015) rear end and considering the similarities between this “new” test car and the previous Challenger Drag Pak models – I would guess that this test car is just an older test car with a new front end and maybe a new interior layout. Unfortunately, the company hasn’t provided any images of the interior, but there is a good chance that this car has the same gauges needed for racing as the previous Drag Pak test cars.

Also unlike any of the new 2015 Dodge Challenger road models, this 2015 Drag Pak test car packs a very unproduction-like engine. Where the road models will come with the Pentastar V6, the 5.7L Hemi, the 6.4L Hemi and the new supercharged 6.2L Hemi – this beast is powered by a 426 cubic inch race Hemi mated to a three speed 727 automatic transmission. When coupled with the trick drag racing suspension and the copious amounts of weight reduction inside and out…this Challenger drag car should be able to lay down some stunning quarter mile times.

The Production 2015 Challenger Drag Pak Should Look a Little Different
Once the Chrysler Group officially offers up the 2015 Dodge Challenger Drag Pak for public consumption, we can expect to see a handful of changes. First and foremost, I would expect to obviously see a rear end with the new taillights of the 2015 models rather than the 2014 taillights shown in the images here. If this test car doesn’t have an interior setting that looks like the layout found in the 2015 Challenger, I would expect that to change as well.

Most importantly, I expect that the 2015 Challenger Drag Pak will come with at least one or two of the production road going engines including the 5.7L Hemi, the 6.4L Hemi and maybe even the Hellcat Hemi. The 426 race Hemi should be available as well, but those road going engines will allow the 2015 Challenger Drag Pak to better conform to NHRA and IHRA stock class racing rules.

Jim Givens wrote on September 1, 2014 - 7:57am Permalink
Mopar was always known for going BIG . I say the drag pack should be a twin turbocharged v- 10 and make the shifter traditional pistol grip