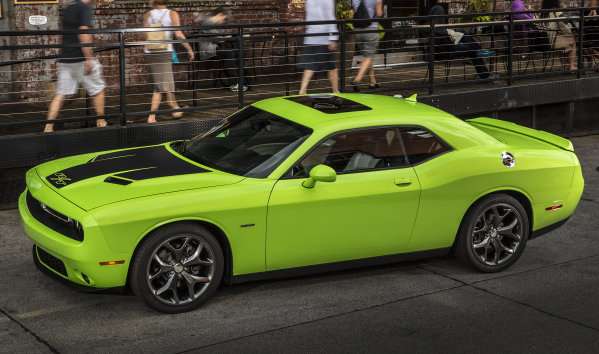 The pricing is available for the 2015 Dodge Challenger, the 2015 Ford Mustang and the 2015 Chevrolet Camaro and once again, the brawny Mopar muscle car is the least expensive option for those looking to get into a V8 powered American muscle car for as little cash as possible.
Advertisement

When a prospective muscle car buy goes shopping for a brand new V8 muscle car for as little money as possible, he or she has three basic options – the Dodge Challenger R/T, the Ford Mustang GT and the Chevrolet Camaro 1SS. Each of these models come with a 6-speed manual transmission and the lowest price of V8 models in the segment. The least expensive of these is the Challenger R/T, with a small advantage over the Mustang and a substantial lead over the Camaro.

Of course, I should point out that the muscle cars mentioned above are the least expensive V8 models with the fewest number of options so while you can get a new Dodge Challenger, Ford Mustang or Chevrolet Camaro for those prices above – the prices come up in a hurry when you begin adding options. However, if you don’t care about options and you literally want to get into the least expensive V8 muscle car possible – the 2015 Challenger R/T is the car for you.

Challenger Scat Pack Offers Big Power Under $40k
The 2015 Challenger R/T has a price advantage over the Mustang and Camaro, but it trails a bit in power. Those prospective Challenger buyers who want to have more power than their neighbor’s Camaro SS can opt for the new Scat Pack with the 392 cubic inch SRT Hemi V8, which features 485hp and 475lb-ft of torque. That new trimline starts at $39,490 including destination while having 59 more horsepower and 55lb-ft more torque than the V8 Camaro. That’s some $5k more than the Camaro 1SS, but the more luxurious Camaro 2SS starts at $38,300 so the powerful Scat Pack Challenger is priced very similarly to the far more power yet far less well equipped Challenger with the 6.4L Hemi.