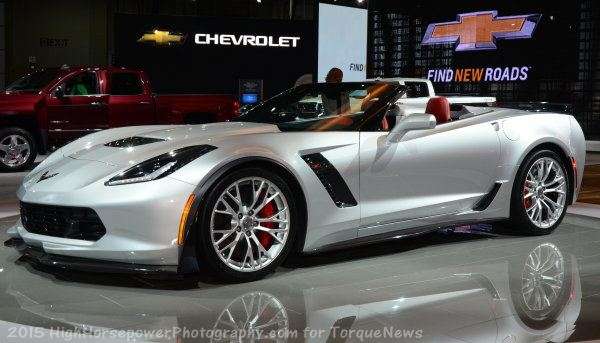 There is a report going around the internet that the 2015 Chevrolet Corvette Z06 Coupe lapped the famed Nurburgring in just 6 minutes and 59.13 seconds, but General Motors has been quick to point out that these rumors are not accurate.
Advertisement

While I hate to plug a site that literally fabricates news stories, this initial “news” broke this morning at HorsepowerKings, where it was announced that the 2015 Corvette Z06 had turned in a lap time of 6:59.13 at the Nurburgring. If you are unaware, that would be an incredibly quick time, ranking 4th overall on the list of street legal vehicles and 6th overall among all vehicles – race cars included. A lap time like that would send a big statement to the rest of the performance world, but General Motors has been quick to send a very different statement about the Z06 Ring times.

C7 Z06 Nurburgring Times Debunked
According to multiple sources including CarScoops, GM spokesperson Monte Doran has made it very clear that the 6:59.13 lap time reported for the 2015 Corvette Z06 is not correct. The initial report indicated that a high definition video was on its way, but Doran also stated that there would be no video to accompany a record-setting announcement.

GM did confirmed that there had been plenty of Nurburgring testing with the new C7 Corvette Z06, including a crash, annoying traffic and some bothersome wet weather, but no record-setting videos had been made. Fortunately, Doran also clarified that when the company does get a chance to make a record run at the Ring, they will be sure to get video of the run in question – likely from the handy Performance Data Recorder system.

A Bit Too Incredible?
The falsely reported Nurburgring lap time of 6:59.13 for the 2015 Corvette Z06 has gotten so much attention because that time is blazing fast. Only five vehicles have ever made it around the Ring quicker than that, including the Radical SR8 and SR8LM (which are both basically race cars that are street legal in some countries), the race-only Pagani Zonda R and Ferrari 599XX and the Porsche 918 hybrid supercar. Had the Corvette broken into the 6 minute barrier, it would have been just the second real road car and the first conventionally-powered car to get around the 12.9 mile German race course in less than 7 minutes.

That time of 6:59.13 would have made the new Corvette Z06 by far the most track capable American car of all time by almost 15 seconds. That time wasn’t totally unbelievable, but it is so smoking fast, it created a great deal of skepticism that was quickly met with the official debunking by General Motors.

So for the folks at HorsepowerKings, congrats on creating another popular false report. I salute your diligence in following the guidelines of journalistic integrity.