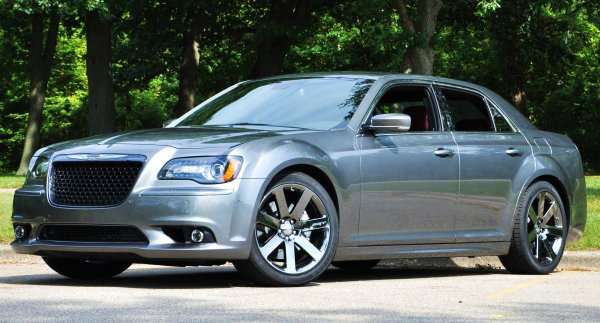 When the announcement was made to discontinue the SRT brand, it was reported by some that the 2015 Chrysler 300C would not get an SRT variant like the 2015 Dodge Charger and Dodge Challenger, but a new report from Allpar suggests that the highest performance Chrysler sedan will live on into the 2015 model year – just without the Hellcat Hemi.
Advertisement

When the 2014 Chrysler Group Five Year Plan was made public last month, the biggest news was that the SRT brand was being discontinued and those SRT models would go back to the same brands as their non-SRT variants. Really, outside of bringing an end to the SRT name as a brand of its own, the only real difference is that the SRT Viper would go back to being the Dodge Viper in the very near future. We also learned that the SRT Charger and Challenger would get the new supercharged Hellcat Hemi and the reports around that time indicated that while the popular Jeep Grand Cherokee SRT would continue into the new model year – the SRT version of the luxurious Chrysler 300C would be killed off.

Well, according to a new report from the Chrysler Group enthusiasts at Allpar, insider information indicates that there will be a 2015 Chrysler 300C SRT – but it won’t pack the same 6.2L Hellcat Hemi that will motivate the 2015 Charger SRT and 2015 Challenger SRT. According to the source, the 2015 Chrysler 300C SRT will get some subtle changes to the front and rear fascia, but the engine won’t be changing. The 2015 SRT 300 will be powered by the same 6.4L Hemi that is offered in the current (2014) SRT models, but I would expect that the 2015 Chrysler 300C SRT will get the increase in horsepower and torque like the other SRT V8 models. The 2015 Challenger SRT392 will offer 485hp and 475lb-ft of torque rather than the 470 and 470 offered by the current models and it would be nothing short of amazing if the Chrysler Group didn’t give the high performance 300 that extra shot of power for the new model year.

The Future of Non-Dodge SRT Models
Allpar has also reiterated that the Grand Cherokee SRT will continue into the 2015 model year with the 6.4L Hemi. Both the 300 SRT and the Jeep SRT will benefit from the added power and the added fuel economy through the impressive high performance 8-speed automatic transmission.

The Chrysler Group has made it clear that they want to remove competition across the brands so it would make (some) sense for the end of the SRT brand to indicate the end of the Chrysler 300C SRT. After all, the 300 is little more than a Dodge Charger with a different body and more luxury goodies inside and in SRT form, the interiors features are nearly identical. Because of that, the redesigned 2015 Charger combined with no mention of the Hellcat Hemi coming to the Chrysler lineup lead many to believe that there would be no SRT 300. It seems that in the near future, the Chrysler 300 will continue to feature a high performance SRT model with the “old” 392 cubic inch Hemi so those prospective buyers who prefer the more luxurious lines of the big Chrysler sedan can still pick that model over the sportier and more aggressive Dodge Charger – they just won’t get to enjoy the 600+ horsepower of the Hellcat Hemi.

Depending on how the sales of the Dodge Charger SRT and non-SRT Chrysler 300 go over the next few years, the SRT variant of the 300 may or may not resurface with the introduction of the next generation large luxury sedan. With the Chrysler Group working to define the Dodge brand as the performance lineup of the company, I wouldn’t be surprised to see 2015 be the final year of the high performance Chrysler 300.