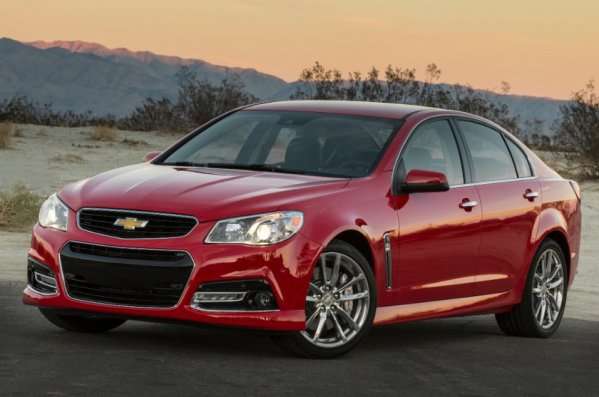 The 2014 Chevrolet SS performance sedan has been marketed by General Motors as a 4-door Corvette and when the 2015 SS models begin arriving in dealerships later this year, they could feature a pair of new features to back up the Corvette relation of this full sized sedan.
Advertisement

The 2014 Chevrolet SS has been billed by GM as being a 4-door Corvette, but the fact that the high performance sedan is powered by the LS3 V8 backed by a 6-speed automatic transmission; it is far more like a 4-door C6 Corvette than the new Stingray. Realistically, that drivetrain makes the SS more of a 4-door Camaro than anything else, but a marketing campaign’s beauty is in the eye of the beholder and there is no question that a “4-door Corvette” sounds a little better than a “4-door Camaro”. Fortunately, word on the street indicates that the 2015 model year Chevrolet SS will get two new features that will make it a whole lot more like the new Corvette Stingray.

First of all, it is expected that the 2015 Chevrolet SS will come with the option of a manual transmission that may be the 7-speed gearbox from the new C7 Stingray. Even if GM uses the 6-speed manual from the Camaro, the SS will have a leg up on the closest competitor in the segment – the Dodge Charger SRT. Of course, it should be noted that the Charger SRT packs 55 more horsepower and 55 more lb-ft of torque, but those American muscle car buyers who want a sedan with a manual transmission will be steered towards this new heavy Chevy high performance sedan. As for which manual transmission the SS will get, I would guess that it will be the 7-speed gearbox from the new Stingray rather than an older 6-speed unit similar to the one at use in the Camaro or the C6 Corvette. The Corvette has been the exclusive carrier of this new 7-speed gearbox for long enough and before it arrives in the next generation Camaro; I expect it to arrive in the 2015 SS performance sedan.

Also (and perhaps more importantly), the 2015 Chevrolet SS performance sedan is expected to come with the Magnetic Ride Control system that is found in the C7 Corvette Stingray and the Camaro ZL1. While the 2014 SS comes with a sport tuned suspension setup, the addition of Magnetic Ride Control to the 2015 SS should improve both handling capabilities and ride quality, since the system can adjust to maximize each without compromising the other at the same time. This should help to close any handling performance gap between the Chevy SS and the Dodge Charger SRT, which uses a dual mode suspension setup that offers a street mode and a track mode. Once again, the Charger is significantly more powerful than the SS so we likely won’t see the big Chevy sedan tearing down any Charger lap times, but this should make a big difference for those folks who want better handling and better ride quality than what is offered by the 2014 SS.

According to Motor Trend’s Jonny Lieberman via his Twitter account, this new 2015 Chevrolet SS will make its grand debut at Detroit’s Woodward Dream Cruise in August. That is an unusual place to debut a new model with new features, but considering the size of the Woodward Dream Cruise, GM will stand to have as many people see the 2015 SS there as they would most American auto shows.