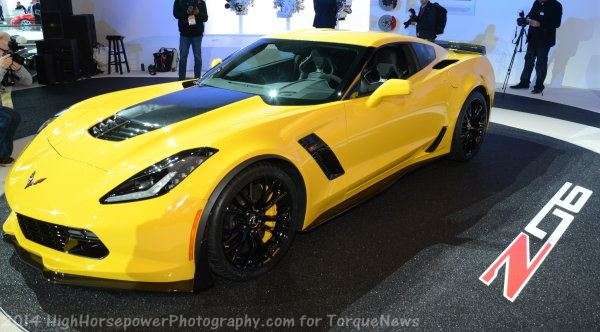 One of the first owners of the 2015 Chevrolet Corvette Z06 recently faced every supercar owners dream when the 650 horsepower LT4 motor failed internally during the recommended break-in procedure – an experience with the owner was quick to share with the enthusiast community at CorvetteForum.com.
Advertisement

With the 2015 Chevrolet Corvette Z06 Coupe being the most powerful stock Chevrolet car ever while also being marketed as the most track capable Corvette of all time, it was only a matter of time before we heard about someone breaking the new LT4 engine that provides 650 horsepower and 650lb-ft of torque. Unfortunately, although the new Z06 has only been reaching owners for a short time, we already have our first announcement of engine problems in a privately owned vehicle. Worse yet, it happened with only 891 miles on the odometer and the engine failed during a stint of gentle break-in driving.

The First Publicly Blown Z06 LT4
Race cars break engines and with the 2015 Chevrolet Corvette Z06 promised to be the most track capable Vette of all time, we could have all imagined that some folks will break the LT4 engine while participating in some high speed racing action. Unfortunately, 2015 Corvette Z06 owner and CorvetteForum.com member Lawdogg149 was recently performing some light break-in work with his new C7 Corvette when the engine began making an awful noise.

According to his posts on CorvetteForum, Lawdogg149 was making a gradual pull from 35 miles per hour, accelerating and shifting short of the redline when the Lt4 engine suddenly began knocking. He pulled the car to the side of the road and popped the hood, at which point he discovered an unpleasant knock coming from the #6 cylinder along with a grinding sound coming from the supercharger housing.

Lawdogg149 wisely got his 2015 Corvette Z06 to the dealership where they confirmed that the engine was toast and the meat of the explanation was that something in the valve train assembly for the #6 cylinder had failed. Unfortunately, General Motors was quick to demand that the dealership send the LT4 engine back to the automaker so that they could tear it down and determine the cause of the engine failure.

Not Likely to Be a Common Z06 Problem
Anytime a big name vehicle like the 2015 Chevrolet Corvette Z06 runs into mechanical issues like a dramatic engine failure, fans of other brands are quick to insist that this is “a problem with the new Z06”. However, at this point, I believe that this is an isolated incident that only affected Lawdogg149’s Corvette and my reasoning in feeling this way comes due to the fact that quite a few new Z06 coupes have been delivered. Now that a fair number of new owners have their Z06 – and some have quickly put the car to work – all without any word of similar drivetrain problems, I find it hard to believe that one engine failure is anything other than an unfortunate fluke for the owner of this car.

Now, should we learn of more examples of 2015 Corvette Z06 LT4 engines failing, this will certainly become yet another black eye for GM, but until more reports of LT4 valve train failures surface, I am chalking this one up to a unique manufacturing or assembly problem.

Fortunately, General Motors is replacing the blown engine free of charge under the normal warranty of the 2015 Z06.

JeffS wrote on January 2, 2015 - 6:58pm Permalink
Somewhere along the way I read that the first cars off the line, (can't remember how many), had a problem with the oil filter flow or some such thing and Chevy corrected the problem, (I think they went with a higher flow oil filter). Lesson here and elsewhere, do not buy the 1st year of a production car that is new or significantly redesigned. There are bound to be growing pains.
R.D. Summach wrote on January 3, 2015 - 11:17am Permalink
I smell a "rat" even though it was not Chevy's rat motor. What kind of break in procedure was used? It sure sounded rather harsh. I had a 427 Chevy that was a wonderful engine. It was broken in gently. I had the lifters changed at 100,000 on the advice of my mechanic. The lifters showed virtually no wear. I changed the oil and filter every 1200 miles or so. Those were the good old days alright. The drivetrain was "bullet proof". I sold the car long ago and it has since been restored. An acquaintance of mine drove a 426 Hemi. Chrysler changed the Hemi twice and then they finally put in a 440 and told him to get lost. It was not the engine's fault at all. GM seems to have been more than fair dealing with the Corvette engine "failure".
robJoy wrote on January 3, 2015 - 5:46pm Permalink
"performing some light break-in work"? What's up with that. Just get in the car and drive it like a normal human being.
Chris Cool wrote on January 6, 2015 - 12:36pm Permalink
GM was too fair, "Lawdogg149" had posted however has now removed his video of him running zero to sixty times on his PDR AND those runs were way into the red line, closer to 7000 more then a few times. I know that the first 500 miles must be really gentle & the next 1000 miles or so pretty cool & easy BUT I never over rev my vehicles even after they are fully broken in. Over rev often = valve train failure
Chile Davis wrote on August 4, 2015 - 9:42pm Permalink
A friend of mine recently lost a 2015 zo6 motor. The reason he was given from dealer was no oil in supercharger from factory. He was told that it is a closed system. Does this mean that there is no way to check the supercharger oil ? That to me sounds like a bad design if in fact this is true. Every supercharged vehicle I have owned has a way to check the oil. To me this sounds odd.
R.D. Summach wrote on August 4, 2015 - 11:28pm Permalink
My Honda lawn mower has a closed transmission as well. There is no way to check the oil level in it either. Maybe the engineers at GM copied Honda engineering. I cannot figure GM out at times. There is sarcasm in my comment in case you did not notice. BTW, I love working on my Duramax when common maintenance items like a bleeder screw for the cooling system is hidden behind a bracket. The fender liner has to be flipped down to get at the fuel filter. I am not surprised about the supercharger on a Corvette having no way to check on an oil level. Perhaps an engineer should take off his fancy shirt and tie and roll up his sleeves and get some grit under his fingernails. Yes, I'm from the "old" school.