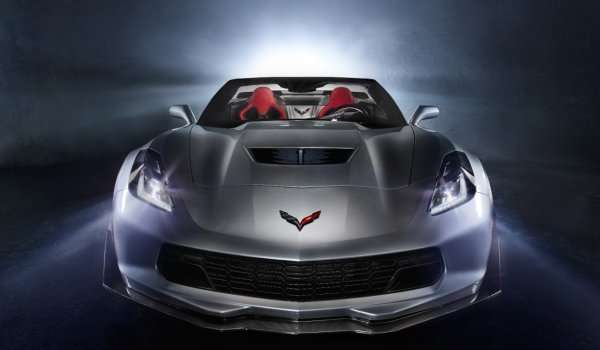 This past weekend I was privy to seeing and hearing a 2015 Chevrolet Corvette Z06 Convertible mule out on the open road and while I am not sure if the car that I heard was wearing production spec exhaust – the few brief seconds that I heard of the new supercharged LT4 sounded sweet enough to melt the heart of any performance car lover.
Advertisement

I have the pleasure of residing in Milford Michigan, just minutes from the GM Proving Grounds, so it is not uncommon for me to see very unusual test cars out on the road and included in those rough looking test cars over the past two years have been plenty of new C7 Chevrolet Corvettes. As far back as last fall, I witnessed a masked up C7 Corvette traveling through the area very late and night with a much louder exhaust than anything offered on the Stingray accompanied by the distinct whine of a supercharger. This past weekend, just as the sun was just about to tuck behind the hills, I found myself sitting in traffic with what looked to be a bright red 2014 Corvette Stingray Convertible…but it had camo across the front end. Anymore, that camo is what catches my eye in traffic and then I figure out why the car is wearing the camo.

For this Corvette, the unique hood and fenders made it very clear what I was looking at – it was a 2015 Corvette Z06 Convertible mule.

I have lived here for a couple years now, but in covering the automotive industry I never get tired of seeing these test versions out on the open road so seeing the 2015 Chevrolet Corvette Z06 Convertible – even all masked up after I have seen the real thing in person – is still neat to me. However, as the traffic began to move, the situation got a whole lot more exciting.

This covered up 2015 Corvette Z06 Convertible was behind one of those people who have to move as slowly as possible when making a right hand turn…which held up the Corvette from getting on its way. When the slow moving car finally got out of the way – right as I was passing the front of the Z06 as I was going the other way – the topless super-Vette driver goosed the throttle and the result was auditory bliss. Mind you, the driver wasn’t racing through Milford but the few brief seconds where he accelerated up the hill at what I imagine was only moderate throttle, the LT4 was able to clear its throat with a mighty growl. Based on the how he climbed in, back out and then the car shifted calmly, I would surmise that this Z06 was packing the new 8-speed automatic transmission. As quickly as he had climbed into the throttle, he had backed off and the transmission quickly and quietly popped into second gear, just after the RPMs dropped enough to bring about some eat-pleasing pops from the Z06 exhaust system.

Also audible during the short burst of acceleration was the distinct whistle of the supercharger that is nestled under the hood of the 2015 Chevrolet Corvette Z06 Convertible…but the star of the show was undoubtedly the roar from the exhaust. It was so loud and so freakin’ awesome that it makes me wonder if this particular mule didn’t wear a race spec exhaust system or something along those lines, but from the opinion of someone who truly loves American high performance – this Corvette Z06 Convertible mule was one of the best sounding cars that I have ever hear. Like, Lamborghini and Ferrari owners are going to need to worry about this new Corvette making their (slower) supercars sound like minivans when this beast pulls alongside at the local country club.

Toyota's First EV Will Have a Name of BZ: Toyota BZ
First Videos From Inside The Boring Company's Las Vegas Loop
END_OF_DOCUMENT_TOKEN_TO_BE_REPLACED