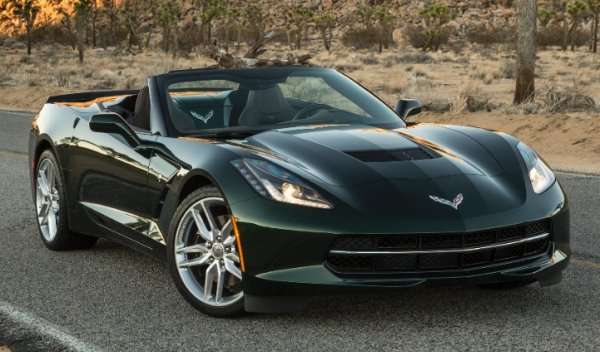 The 2015 Chevrolet Corvette Valet Mode Might Be Illegal to Use

The unique Valet Mode of the 2015 Chevrolet Corvette lineup which uses the an in-car microphone and video camera to capture what goes on with the car when the owner is not around is a super-cool feature that no automaker has offered in the past – possibly because it is illegal in some places.
Advertisement

The 2015 Chevrolet Corvette Stingray and Z06 is equipped with the new Performance Data Recorder system (PDR) that integrates a front-facing digital camera, an in-car microphone, an SD card and the infotainment system touch screen to help owners to get the most out of their new sports car. Better yet, this menagerie of recording devices was included in the new Valet Mode, which activates the recording devices when the car is started so when you leave it with a valet, you can check back to see if your car was abused while you were gone.

This seems like a great idea, but there is one small problem with the Valet Mode in the 2015 Chevrolet Corvette – it is illegal is quite a few places.

The Legality of the Corvette Valet Mode
The 2015 Chevrolet Corvette Stingray and Z06 Valet Mode activates the in-car microphone and the front-facing camera – recording any drive time while activated on the SD card in the glove box. This way, when you drop off your C7 Corvette with a valet (or anyone else you might not trust, like a wife or friend), you can turn Valet Mode on and whenever someone drives the car - the system records what is going on in and around the Corvette.

This sounds great on paper, as this system will allow you to track your progress on the race track while also helping to protect your 2015 Corvette while in the hands of those who may not be able to control the power. The only downside – and it’s a pretty big downside – is that this recording system is illegal in 15 states. While you are allowed to legally record video of people, you have to have their consent to record audio in California, Connecticut, Delaware, Florida, Hawaii, Illinois, Louisiana, Maryland, Massachusetts, Montana, Nevada, New Hampshire, Oregon, Pennsylvania, and Washington. This is why many places in those states with surveillance cameras have signs stating that you are on camera and it is also why many of the crazy videos that we see on “World’s Dumbest” don’t have sound.

In other words, it is against the law to record someone’s voice while they are driving your Corvette in those 15 states unless you have their permission. In fact, it is a felony to record someone’s voice without them knowing and consenting under wiretapping laws so in handing your Corvette over to a valet in those 15 states with Valet Mode enable could land you in jail.

Just in case it makes Corvette owners feel any better, this problem is not just affecting those who bought a 2015 Stingray. The new Lexux Enform Remote App also monitors what is going on with the car and, like new Corvette owners, new Lexus owners have a high tech system that could land them in jail. You can read more about that problem by clicking here.

That makes Valet Mode much less cool in those 15 states.

GM Warns Owners, Plans a Fix
While it blows my mind that none of the team of lawyers employed by General Motors brought this issue up ahead of time, it has created an unexpected problem for the automaker with those customers who are spending the most money. Fortunately, those laws only seem to affect people in those 15 states so owners in the other 35 states *should* be fine to use the system. However, GM has instructed all owners to either avoid using the Valet Mode or to at least inform anyone getting into the car that they are being recorded.

Gm has stated that they are working on a “very important update” to the Corvette’s Valet Mode system, but they didn’t offer any idea as to what they will change. It seems that they could either disable the cabin voice recorder when using the Valet Mode or GM could add some sort of warning to the infotainment screen that makes it clear that occupants of the vehicle are being recorded.

In any case, the Performance Data Recorder in the 2015 Chevrolet Corvette Stingray and Z06 is every bit as awesome as ever, but if you leave the car with the valet and you plan to use the Valet Mode to spy on the shady drivers, you will want to check your state recording laws before using the system.

mike wrote on September 29, 2014 - 9:02pm Permalink
Constantly Having Every Vehicle Recalled Over Lousy Engineering Techniques
Rance Maddox wrote on September 30, 2014 - 1:32am Permalink
I just broke my back , I could drive but when I went to Missouri orthopedic in Columbia Missouri , and couldn't walk from the parking garage to hospital , the valet parked my 03 corvette convertible and my girlfriend came in 5 minutes be hide me and she parked beside my vette , 2 hours later I got my keys from valet and when we got to her vehicle mine was gone , so I'm thinking the new camera would be great because things like this wouldn't happen and if they did the guilty party would be in trouble , guess some states thinks it ok to steal and abuse your vehicle.
scott wrote on October 9, 2014 - 2:17pm Permalink
The author is INCORRECT with regards to his blanket statement of illegality. California (and most if not all other states) require the entity doing the recording to notify everyone being recorded, so as to remove any semblence of privacy. Basically stated, you can post a notice stating you are being recorded and that will suffice.