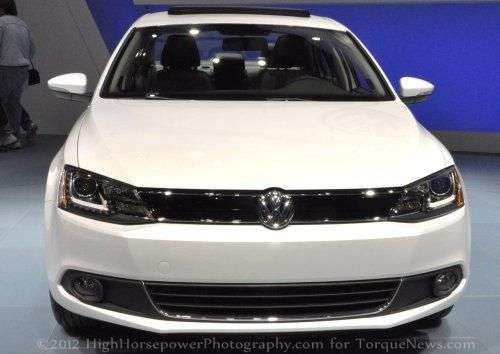 While Volkswagen Auto Group has been busy this last week telling the world about their 2013 model year lineup for their various brands, company Vice President of Product Marketing & Strategy Rainer Michel recently told the folks at AOL that for 2014, the Volkswagen Jetta will drop the 2.5L inline-5 engine for a new turbocharged 4-cylinder mill.
Advertisement

The new turbocharged 4-cylinder engine coming to the 2014 Volkswagen Jetta will measure 1.8 liters, using direct injection in addition to forced induction to help increase the Jetta’s fuel economy without sacrificing power. Even though no estimates have been offered thus far, we would expect that the new turbocharged 1.8L engine will have no problems exceeding the 24 miles per gallon around town or the 31mpg on the highway that the current Jetta offers when powered by the 2.5L inline-5.

The “new” 1.8L turbocharged 4-cylinder engine coming to the 2014 Volkswagen Jetta will be built at the company’s new engine plant in Silao Mexico. That plant is expected to come online sometime next year and when it does, it will produce around 330,000 engines annually. With the German automaker’s increased capacity to built these 4-cylinder engines, combined with the efficiency gains to be had from making the change away from the 2.5L engine, it really doesn’t come as much of a surprise that the inline-5 will be killed off in place of a turbo 4.

The “bad news” here, if there is any, is that the 1.8L turbocharged motor coming to the 2014 VW Jetta is already at use in the European VW CC and Passat. In those models, it offers 158 horsepower and 185lb-ft of torque – accounting for an increase in torque over the 2.5 inline-5 but a decrease in horsepower. This will likely be made up for by the fact that this new engine will be more compact and lighter than the inline-5 while the forced induction and direct injection technology should help to ensure that this new motor is quicker-revving and more responsive than the current 2.5L. Provided that the output of this motor stays the same when it hits America (compared to the current European engines), the power ratings should allow the new 1.8L mill to sit comfortably above the base model engine but still leave plenty of room for the high end turbocharged 2.0 engine.

One advantage that the new 1.8L turbo motor will have when it arrives in the 2014 VW Jetta is an electronic power assist steering system (EPAS) that should allow the new Jetta to make better use of its available power while also offering sportier handling capacities for the driver. This, coupled with the more acutely tuned suspension should add some fun to drive factory while the powerband and added torque of the new turbocharged engine should make the car-buying public forget all about the outgoing inline-5. “More fuel efficient” is important but when you can add “and more fun to drive” – you have a car that is far more likely to succeed in today’s market.

We would expect that a proper manual transmission will be offered with the 2014 VW Jetta packing the new turbo 4 but with any luck, this new 1.8L turbocharged engine will feature the new DSG (dual clutch automatic) instead of the traditional automatic currently mated to the inline-5, which will likely enhance the driving characteristics of the Jetta while also improving fuel economy.