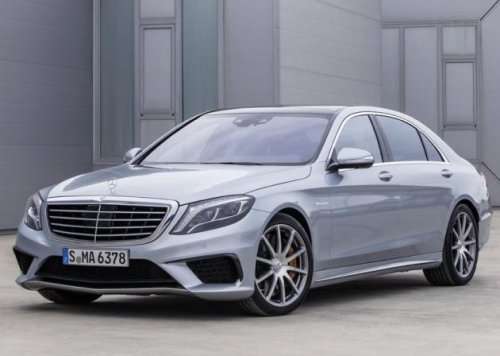 The official specs of the new range topping 2014 Mercedes Benz S63 AMG have been announced and in addition to the new high tech 4Matic all wheel drive system – the newest Mercedes super sedan gets an increase in horsepower and torque along with a reduction in weight that helps it to turn out supercar-like performance numbers.
Advertisement

While the most noticeable changes between the “normal” 2014 Mercedes Benz S Class and the high performance AMG S63 shown here include exterior features like an aggressive front fascia with enlarged air intakes, a lower stance thanks to the sport tuned suspension, AMG wheels and a unique lower rear fascia with quad polished exhaust tips – the most important difference is under the hood.

The 2014 mercedes Benz S63 AMG is powered by the same twin turbocharged 5.5L V8 that is employed in the current (2013) Mercedes Benz S63, the 2014 model year BiTurbo engine has been reworked to offer 577 horsepower and an awesome 664lb-ft of torque. When compared to the 536 horsepower and 590lb-ft of torque offered by the current S63 – this represents an increase in horsepower of roughly 7.5% along with a 13% increase in torque.

Helping 2014 Mercedes Benz S63 AMG owners make the most of all of that power is the new 4Matic all wheel drive system.

The 4Matic AWD system sends 67% of the engines power to the rear wheels under normal circumstances which should give this 4-door monster the feel of a rear wheel drive sports car with the added traction of an all wheel drive vehicle. Linking the 577 horsepower twin turbo V8 to the advanced all wheel system is Mercedes’ 7 speed Speedshift automatic transmission that features three modes – Controlled Efficiency, Sport and Manual.

The Controlled Efficiency mode is seemingly the high performance version of an “Eco” mode with a balance of driving comfort and efficiency while keeping all of that power on tap. This mode also allows the S63 to pull away from a stop in second gear for a smooth, lower performance start. In Sport, the 2014 S63 AMG shifts to optimize performance while doing the shifting for you and when the driver selects the Manual mode, the steering wheel mounted shift paddles give the driver control of the shift points of the newest AMG sedan.

The culmination of these features makes the 2014 Mercedes Benz S63 AMG 4Matic one of the best performing sport sedans in the world with an electronically limited top speed of 186 miles per hour and a 0-60 time of 3.9 seconds. Just to be clear – that is 3.9 seconds for a large luxury sedan to dash from a stop to 60 miles per hour. That is a full half second faster than the 2013 S63 that took 4.4 seconds to hit 60 from a stop. A sub 4 second 0-60 time was once only possible in the supercar world but with the new S63 – AMG has a true full sized luxury sedan that will go toe to toe with some of the world’s best sports coupes… and win.

Finally, the 2014 Mercedes Benz S63 AMG 4Matic is expected (by the company) to offer better fuel economy than the outgoing model even though the 2014MY S63 packs a bunch more power and all wheel drive. There have been no estimates stated as to what kind of MPGs to expect for 2014 but with the 2013 S63 offering just 15mpg around town and 23 on the open road – there is plenty of room for improvement. We can expect to see the fuel economy figures when we get closed to the November sales launch of the new AMG super-sedan.