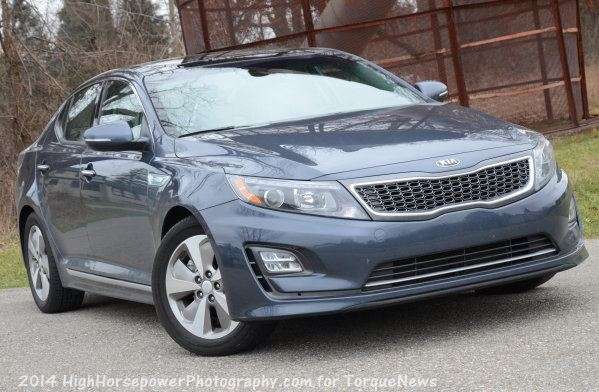 While the 2014 Kia Optima Hybrid has some unique features on the outside to improve aerodynamics and efficiency, the Korean automaker has done an awesome job of applying hybrid technology to a great looking, well-appointed midsized sedan – preserving all of the good aspects of the non-hybrid Optima while adding very real 37mpg capabilities.
Advertisement

Ten years ago, had you told me that the 2014 Kia Optima Hybrid would be an attractive midsized sedan that was packed with premium features, I wouldn’t have believed you. Let’s be honest – the older Kia cars were your typical little econoboxes with bland exterior styling and incredible drab interiors. At the same time, hybrids in that era were designed purely for aerodynamics and, obviously, aesthetics played no role in the design of those earlier hybrids. With the old Kia cars, you were buying a cheap car and you were getting what you paid for while driving a hybrid meant that you would have to deal with something that looked like a hardboiled egg that had been squished a bit.

Fortunately, that has all changed. In the past few years, Kia has gone in bold directions with their exterior styling and it has paid off wonderfully, as the entire Kia lineup sports a look that stands out in their respective segments. Regardless of the car or SUV in question, Kia has added bold, aggressive styling that I really like and better yet, advancements in hybrid technology has allowed Kia to create an vey fuel friendly Optima Hybrid that doesn’t look like it is a hybrid…and that is a very, very good thing.
My 2014 Kia Optima Hybrid EX test car carried a base price of $31,995 and when you add in the stunning panoramic sunroof ($1,500), the white interior package ($400) and the $800 destination fee, the price as tested was $34,695. Now, some of you might think “$35 grand is a lot of money for a midsized Kia”, but in addition to the highly efficient hybrid drivetrain, the Optima Hybrid EX is packed with features that are more commonly found in far more expensive vehicles. Honestly, at just under $35,000, the Optima Hybrid in EX form is a great car for the money.

The Exterior
The exterior design of the 2014 Kia Optima Hybrid might be one of my favorite features, as while the hybrid package adds some unique cues to enhance aerodynamics, this high fuel economy model still has the same sporty, aggressive look as the rest of the current Optima lineup. This includes the long, low form, the angular LED-trimmed headlights, the bright LED taillights, the sharp body lines down the side and the fastback-like shape of the rear glass. While the Optima is a very affordable midsized sedan, the exterior design puts a major emphasis on sportiness and the Hybrid model sticks with that theme. Really, if not for the unique hybrid badges on the front fenders that catch the eye, it is impossible to tell that this is a hybrid at all. There are some exterior changes made to the Optima Hybrid, but if anything, they make it even sportier. This includes a reworked front fascia that has vents near the fog lights to help control air flow around the front end as well as a re-sculpted front fascia that performs the same duties. Out back, the lower rear fascia has been extended to reduce turbulence and the wheels of the hybrid package have been designed to be as aerodynamically perfect as possible with a unique “blade” design. These changes have been made to help improve fuel efficiency, but they all fit into the aggressive design of the entire Optima lineup.

As midsized sedans go, I consider the exterior styling of the 2014 Kia Optima to be a total success and the fact that Kia was able to add aero features to the hybrid models that improve fuel economy without killing the sporty feel of the Optima makes this car a home run in my book.

The Interior
Some hybrids have interiors that are a bit stripped out to save weight, but with the 2014 Optima Hybrid EX, the Kia team went the total opposite direction. When you climb into the Optima Hybrid, it feels far more like a luxury sedan than a Korean midsized hybrid. As mentioned above, my test car was equipped with the optional white leather interior package, which provides a very high end contrast to the predominantly black cabin. These bright white seats with black piping, surrounded by black leather on the doors and dash look more like something that you would see in a German luxury sedan and whether you are in the driver’s seat, the front passenger’s seat or either of the rear outboard seats, you will find that you have plenty of leg, knee, thigh, elbow, shoulder and head room. This is a great car for transporting four adults and while the rear middle seat is very small, that is a fine tradeoff for the spaciousness of the other four seating positions. Three kids could fit in the back, but the design of the rear lower seat cushion makes that middle spot pretty uncomfortable for anyone. However, that is the only thing that I can complain about with the Optima Hybrid interior. Once you get past the styling contrast of the white seats to the black carpeting the leather trim in the 2014 Optima Hybrid EX, you are greeted by a long list of high tech infotainment goodies that reinforce the luxury feel. The centerpiece of the cabin is the bright infotainment touch screen mounted high on the center stack, with access to the radio, the hands free phone system and the navigation controls. If you don’t love touchscreen controls, the Optima also has a collection of knobs and buttons just below the screen that give you control of just about every aspect of the infotainment system and what you cannot do with those buttons and knobs, you can do with the spread of controls mounted on the leather wrapped steering wheel. The standard dual zone climate system is not integrated into the infotainment system, but a nice, simple to use group of traditional buttons and knobs makes adjusting the temperature inside of the vehicle quick and hassle free. Also, the Optima Hybrid EX comes with front heated and cooled seats, which are controlled by a rocker switch next to the shifter. Also mounted on the steering wheel of the 2014 Kia Optima Hybrid EX are the controls for the driver information center, which has a small screen mounted between two larger analog gauges. On the left, you have an Eco Gauge that coaches you to get the best fuel economy possible along with a gauge that shows the power levels in the hybrid electric drive battery while the right side gauge is a traditional speedometer with a normal fuel gauge. Between these two large gauges is a screen that displays a variety of information, including power flow, fuel economy, trip information and normal non-hybrid data like outside temperature, gear selection, etc. This isn’t quite as fancy as some setups, but we have to again consider the fact that this is a $35,000 Kia Hybrid – not a $50k luxury car.

Finally, we have the dual unit panoramic sunroof of the 2014 Optima Hybrid EX. At $1,500, it is a bit expensive, but it looks great from the inside and outside, so were I buying a new hybrid Optima today, it would most certainly be one of the boxes that I check.

The 2014 Kia Optima Hybrid EX interior doesn’t look or feel like most hybrids, with a great infotainment system, heated/cooler front power seats, a stunning white leather interior package and tons of room for front and rear riders. This is a cabin that would “work” in a far more expensive luxury sedan, but in this case, you can get all of this from a Kia hybrid that costs less than $35,000. This interior isn’t just impressive for a hybrid – it is impressive for any midsized sedan in this price range.

The Drive
The 2014 Kia Optima Hybrid EX is powered by a 2.4L 4-cylinder engine mated to an electric drive unit which combine to offer 199 horsepower and 235lb-ft of torque. These numbers are nothing fancy, but this output provides plenty of power to get the Optima moving. From a stop, acceleration is strong (presumably thanks to the initial torque of the electric drive) and while the hybrid models don’t have the midrange and high speed passing capabilities of the Optima Turbo, the hybrid does a fine job of keeping up with fast moving traffic. In short, the Optima Hybrid doesn’t feel starved for power like so many hybrids on the market today. Most importantly, the hybrid drivetrain in the 2014 Optima is very efficient. There is an Eco mode that is controlled by a button on the steering wheel and this improves the fuel economy by essentially softening the throttle input, but you do lose some performance in that mode. Because of that, I drove with the car in Eco mode when on the highway, but I took it out of Eco mode when driving around town where I wanted more throttle response and low end grunt. With a pretty even mix of highway and around-town driving, I averaged 37.8 miles per gallon, which is slightly better than the 37mpg expected by the EPA. Mind you, I drive kind of fast, so I believe that I could have gotten slightly better numbers had I put some effort into it, but even when driven normally, I was able to hit the EPA numbers. I can also confirm that the expected 39mpg on the highway is very realistic, so someone who does a great deal of highway driving should be able to eclipse the 37mpg combined figure.

One big reason why I was able to get some strong fuel economy numbers was due to the super smooth transition between EV mode and the gas drive mode. Even when you are driving at highway speeds, the Optima Hybrid slips in and out of EV mode without any notice and, really, if not for the EV light on the dash – it is very hard to tell if you are running on battery power or gasoline. Around town, the transition to EV mode is more noticeable, only because you can hear that the engine isn’t running and in situations like driving around a parking lot, the only noise you hear is the “whir” of the electric drive system. Finally, while the 2014 Optima Hybrid didn’t offer quite the same level of ride quality as the non-hybrid models, I suspect that someone who hasn’t driven as many vehicles as I have would find the ride quality to be very good. I believe that the low rolling resistance tires play a big part in this, but even with a little more of the road vibration transferred through the suspension due to the harder tires, the Optima Hybrid is still very quiet while driving at highway speeds.

The Final Word
If you like the sporty look of the current Kia lineup and you are looking for a midsized hybrid sedan, the Optima Hybrid EX should most certainly be on your short list. This car adds the expected hybrid aero goodies in a way that maintains the sporty feel of the Optima, the interior is literally luxury level in both quality and amenities and – most importantly – it gets great gas mileage without killing the drive qualities that you get from the non-hybrid Optima sedan. The Kia Optima is a great car and while the Hybrid might bring the price up, it is clearly justified by the long list of standard features and the fuel sipping drivetrain that balances power and efficiency very well.