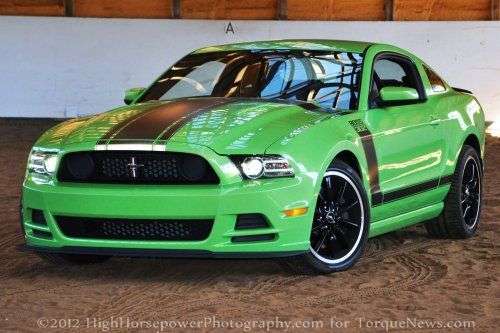 When we got our first information on the 2014 Ford Mustang months ago, it was understood that the order bank would open on November 12th, so it makes sense for the official company order guide to surface this week. Not surprisingly, it looks like pretty much everything that we heard in August from The Mustang Source is accurate and the bad news is that the Mustang Boss 302 indeed seems to be gone. The only mention of the awesome Boss 302 in the 2014 Mustang order guide is the fact that the School Bus Yellow paint option - which was exclusive to the 2013 Boss 302 - has been deleted. Click here for a look at our original piece detailing the changes for 2014.

When the new Boss 302 was introduced for the 2012 model year, Ford Motor Company expected for the modern Boss to be restricted to a 2 year run. Unfortunately, that appears to be the case.

Part of the 2014 Ford Mustang order guide is a page that details the major product changes and as expected, the categories for Interior Changes, New Functional Equipment Changes and New Option Changes are all followed by “None”. Luckily, the 2013 Mustang V6 and GT have gobs of power and great fuel economy while also offering a comfortable interior layout with plenty of options.

Finally, the 200+ mile per hour 2014 Ford Shelby GT500 Mustang receives a few minor changes of its own with the addition of Oxford White and Ruby Red Metallic with Tinted Clearcoat while the inside of all non-Recaro race seat equipped GT500 Mustangs will come with heated seats.

The changes made to the 2014 Ford Mustang are very minimal and honestly, what little has been added falls far short of making up for the fact that the Boss 302 is gone. The Boss 302 is one incredible piece of machinery so anyone who has had the pleasure of driving one will likely shed a tear over the loss of the Boss option but as they say – tis better to have loved and lost than to have never loved at all. Two years of the new Boss is better than no years and with any luck, we will see the technology from the Boss arrive on the next generation Mustang for the 2015 model year. The good news is that 305hp Mustang V6, the 420hp Mustang GT and the 662hp GT500 will all be back for the final year of this generation Mustang and 2015 can only bring more exciting muscle car news for Ford fans.

Even though there will be no Boss 302 in 2014, the image above on the right shows the Boss in Gotta Have It Green – a color that I love and will be happy to see return for the 2014 model year Mustang.