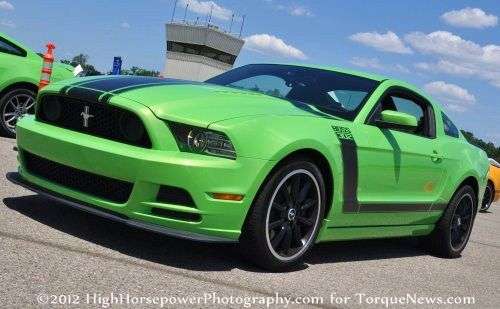 The 2014 Ford Mustang will be the last of the current generation of the fabled American performance car and as the S197 platform enters its final year of production, the mighty Mustang will receive a few new colors, some new stripes and a pair of appearance packages but sadly – there looks as though there will be no 2013 Mustang Boss 302.
Advertisement

Many people expect that the 2014 Ford Mustang will look very much like the current 2013 models as Ford Motor Company prepares to celebrate the 50th anniversary of the Mustang with the unveiling of the next generation of their incredible pony car for the 2015 model year. It is expected that the 2015 Ford Mustang will arrive on April 17th, 2014 – marking 50 years to the day that the original Mustang was introduced at the 1964 World’s Fair – so with such a short period of time where the 2014 Mustang will be sold it makes sense that there wouldn’t be any major changes for the 2014 model year.

A member of the site TheMustangSource has done some digging through FoMoCo order information and has come up with a spread of information offering us a look at what should differentiate the 2013 and 2014 Ford Mustang. “Five Oh Brian” has found information on the 2013 Mustang in V6, GT, GT/CS and GT500 form with tidbits of information for each.

Sadly, he has not found any information on a 2014 Mustang Boss 302 so it appears that the awesome Boss not carry on past the 2013 model year. When Ford launched the Boss 302, it was expected to be a two year offering and while strong sales coupled with instant popularity gave some the hope that the Boss would live on – it does not appear to be the case. Even if only offered for two years, the modern Mustang Boss 302 and Boss 302 Laguna Seca are a couple of the most incredible cars to ever sport the Mustang name.

The Boss will be missed.

As for changes to those 2014 Ford Mustang trimlines that are available, we begin with a spread of new exterior color choices. First, a pair of “new” colors hit the 2014 Mustang lineup as Ruby Red replaces Red Candy while Oxford White replaces Performance White. The 2014 Mustang GT California Special (GT/CS) will be available in six colors - Deep Impact Blue, Race Red, Black, Sterling Gray, Ingot Silver, and Oxford White. The 2014 Shelby GT500 will do away with the matte black stripes offered on the 2013 GT500, instead packing some shinier gloss black stripes.

The 2014 Ford Mustang V6 will continue to be offered in a Base or Premium package.

The Base V6 Mustang will come in two different configurations (100A and 101A). New for 2014 is a V6 Appearance Package, option code 541, which will likely bring some of the aesthetic items of the V6 Premium (stripes, wheels, rear spoiler) to the Base V6 Mustang.
Next, the 2014 Ford Mustang Premium V6 comes with four different package options including the standard offerings (200A and 201A) in addition to the Pony Package (202A) and the Mustang Club of America Package (203A). These packages appear to be largely the same as the 2013 model year with the exception of a new stripe option on the Premium V6 201A models.

Like the V6 models, the 2014 Ford Mustang GT will be available both a Base and Premium form along with the GT/CS. The 2014 Mustang Base GT is available in two basic forms (300A and 301A) while the 2014 Premium GT is available in three forms (400A, 401A and 402A) with the 402A being the California Special package. The only real change for the 2014 Mustang GT is for the Base models, which will be available with option code 542 – “GT Appearance Package”. Much like the V6 Appearance Package, the GT upgrade option will likely add goodies like a rear spoiler, sportier wheels, and some stripes.

Five Oh Brian ended his wonderfully informative post by explaining that order banks for the 2014 Ford Mustang will open on November 12th 2012 with production scheduling set for December 6th. Production of the 2013 model year Mustang will end on January 11th 2013 and 2014 model year production will begin shortly after.

Some of you might be wondering why Ford Motor Company is getting so far ahead of itself with the model years compared to the calendar year dates. There was once a time where a 1984 car came out in 1984 but in this day and age, it is not unusual for a new model year to be out months in advance. For example, the 2013 Mustang was on the street some 6 months before the end of 2012 and now the 2014 Mustang is going to begin production in early 2014. One key reason for this may lie in the history of the fabled Ford pony car.

The original Ford Mustang was introduced at the 1964 World’s Fair in New York on April 17th, 1964 and it did so to rave reviews. Those early Mustangs sold before the end of 1964 are commonly referred to as “1964 ½” Mustangs but in reality – these were all 1965 model year Mustangs as indicated by the vehicle identification number. Ford plans to launch the next generation Ford Mustang for the 2015 model year on April 17th 2014 to celebrate the 50th birthday so it seems to prepare for that early launch of the 2015 model year vehicles, Ford has shifted production and sales of prior model years a bit in preparation for the next generation Mustang.

On the behalf of the entire automotive world, my thanks goes out to Five Oh Brian for giving us something to talk about during these slow news months. Without enthusiasts like him, we would all be forced to wait for press releases to know what is coming in future model years.