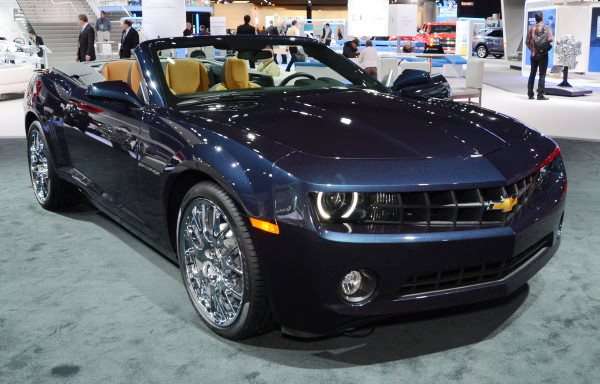 I frequently see people posting on forums and social networks about how muscle cars should only be offered with V8 engines, but production statistics for the 2014 Chevrolet Camaro paint a very clear picture as to why all three American automakers offer their muscle cars with smaller engines in addition to the powerful V8.
Advertisement

I love American muscle cars and for those regular TorqueNews readers who follow my coverage of the Chevrolet Camaro, the Ford Mustang and the Dodge Challenger, that should be no secret. However, I am frequently troubled by the commenters who go about how muscle cars should only come with V8 engine and nothing else. These negative commenters insist that the people who buy V6 versions of the Camaro, Challenger and Mustang shouldn’t have purchased a muscle car if they didn’t want more power. However, the anti-V6 people should understand that the V6 engines are why these cars managed to exist with powerful V8 engines in an era where automakers are being forced to produce cars that put fuel economy first.

To show just how important V6 models are to the American muscle car segment, I present to you the production figures for the 2014 Chevrolet Camaro.

Based on those numbers, if engine options were left entirely up to the accountants, none of the V8 models would exist since the take rate of V6 models are almost 3 to 1. This high number of V6 models sold allow GM to continue building models like the ZL1 and Z28, which have a much lower take rate. Also, while most V8 muscle car owners don’t care about fuel economy, the automakers do and having 73% of Camaro buyers opting for the fuel friendly V6 allows GM to see a much smaller impact on their fleet fuel economy figures on which CAFÉ laws focus. In other words, GM has to hit a certain average fuel economy figure across their entire vehicle lineup and the sales volume for more efficient models help to equalize any negative impact created by high performance, less efficient models. GM can sell 515 Camaro Z28 coupes without worrying about an impact on CAFÉ requirements because they sell 71k V6 models.

Breakdown by Engine and Transmission for the 2014 Camaro
While the most popular engine for the 2014 Chevrolet Camaro was the 3.6L V6, buyers also had their choice of 4 V8 engines with the Camaro SS getting the L99 and LS3 V8 while the ZL1 features the LSA V8 and the Z28 has the LS7 V8. The most popular V8 for the 2014 Camaro was the L99 (Camaro SS, automatic transmission) with 15,006 units sold around the world and the LS3 (Camaro SS, manual transmission) was second with 8,194 units sold. The 580hp supercharged LSA V8 in the Camaro ZL1 ranked third among the big engines with 2,436 units sold and the Camaro Z28 was last with only 515 models fitted with that formerly Corvette-only engine.

While we all want to be driving a powerful muscle car with a V8 engine and a manual transmission, the auto industry is all about making money and with V6 automatics being the bestselling muscle cars – those folks who hate the V6 and self-shifting transmission should applaud those folks who own a V6 automatic Camaro, Challenger or Mustang – as they are technically the people who keep the automakers building the higher performance models that we all love so much.

Tim wrote on January 12, 2015 - 12:24pm Permalink
Sales numbers are so much only a small part of the real issue. I will sum up my view on this with one sentence: Replace muscle car V6 engines with similar-sized V8 engines. Period. I believe the only reason that V6 engines outsell V8 engines in this category is because most buyers cannot afford the V8. So, scrap the V6 and build one or two smaller-sized V8 engines. And nobody can convince me that a say 3.5L V6 is cheaper to build than a 3.5L V8 just because it has to less piston/cylinders. It may have two less piston/cylinders but you need to remember the V8 cylinders are smaller than the cylinders in an equal-sized V6. Offer small V8 engines and I would be willing to bet all my worldly possessions that total sales would significantly increase. And you need to remember that us so-called negative people who are anti-V6 are sickened by not only the lack of power but the disgraceful sound of hearing a Mustang/Challenger/Camaro V6 rip by us. There is nothing more unappealing in the automotive world. As far as transmissions go, I am pro-manual but I do believe there is a place for automatics. I used to think that people who have automatic performance cars just simply didn't know how to drive, but I do now recognize that some get tired of shifting. I myself have driven many automatics and have never driven one that shifts to my liking which is why I will likely always prefer a manual. SMALL DISPLACEMENT V8 MUSCLE CARS!!! Spread the word and hope we can make it happen!!!
rwi2112 wrote on September 16, 2019 - 1:00pm Permalink
Why would anyone want more weight with the same displacement ? Just wondering
Pete wrote on January 30, 2015 - 12:18am Permalink
The reason I purchased the V6 Camaro is because I think the 6 is sexy. I've owned close to 30 automobiles over the years and currently own six which includes a modern Corvette that can easily beat any Camaro SS made today. But I still chose the V6 Camaro, not because of price or gas or insurance. But because I think the 6 is sexy. Anyone with half a brain can sit in a V8 powered car and let their foot drop and then feel good about themselves. And hey, if that's what turns you on... GREAT! So why do some V8 Camaro owners rag on the V6ers? Probably because they aren't completely satisfied with their car and it bothers them that there are those of us who are completely happy with our sexy 6's, it must infuriate the hell out of them, otherwise why would they care? They must have huge regrets that cause them to have to intentionally seek out people with the sexy 6 so that they can bash them and thereby somehow validate themselves by doing so. The Camaro V6 is not the first car I've ever purchased and it's not the fastest. But it sure is sexy and I love her! If you're not happy with your 8, don't come pounding on me to make yourself feel better. And if you really are happy with it, then why are you wasting your time complaining about me and what makes me happy? Go drive your car already and leave me alone! LOL. One thing I have noticed on the forums is that most of the V8 "owners" that bash the V6ers are either first time V8 owners themselves or not even an owner at all. Real enthusiasts who have been around awhile have learned to appreciate variety which truly is the spice of life.
Jon Blair wrote on February 3, 2016 - 2:39am Permalink
My Black 2014 V6 RS is completely a radical and amazing piece of machinery. I 100% love it, and no puffed up Vh8ter will make me question its engine. The way I look at it is this: It's PLENTY fast enough, and meanwhile I'm doing my part in minimizing my use (misuse) of fossil fuel. V8? What the f*ck for? Did these people who bash on V6 engines want to be race car drivers when they grew up (or firemen, astronauts)? Oh, wait. Maybe they just never grew up. The fact that my car can possibly reach an excess of 150mph is fast enough. Trust me. Like I said, I'm VERY happy with my [email protected] ride. And it'll smoke and outperform most V8 engines of yesteryear. These people should get off their high horse and give the money that they'd save (if they had a V6) to an important cause rather than their ego-machines. The people I know that rock V8s usually look way down on those who frown upon V6ers. Camaro owners should be cool to one another, no matter what model they drive. Simple as that. Cylinder count judgement......lame.
Stephen Anthony... wrote on June 20, 2020 - 7:46am Permalink
...so here it is in 2021 and I recently traded in my 2013 Camaro RS V6 automatic for a 2014 Camaro 2SS LS3 manual 6 speed. Why? Only because the 2014 had ridiculously low miles with one owner and was showroom immaculate...with Recaro seats and a good price tag. The 2013 V6 auto was the most enjoyable ride I had ever owned. The SS is a beast even in factory form, and satisfies that itch that old guys like me have for true V8 power. In a perfect world, I would have kept both, as the V6 auto was really fun for an everyday car, and probably more practical. But I would still have that itch!