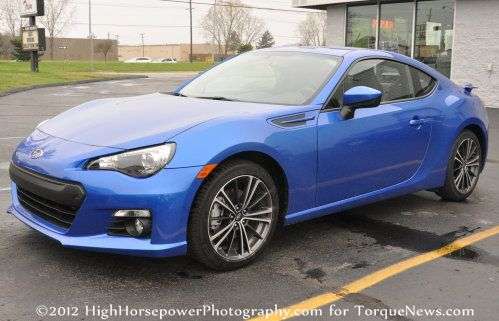 2013 Subaru BRZ spotted out and about in Metro Detroit

It should be some time before the 2013 Subaru BRZ sports coupe hits showrooms around the United States but our spy photographers have captured the first Subaru BRZ that we have seen “in the wild” right here in Metro Detroit – pulling into a custom interior shop of all places.
Advertisement

We were driving down a local road when we saw a bright metallic blue 2013 Subaru BRZ (similar to the one seen at the 2012 Detroit Auto Show) pulling into Shelby Trim of Sterling Heights, Michigan. Shelby Trim is a top notch custom interior and convertible top shop that services both privately owned vehicles along with company owned models from the likes of GM, Chrysler, Ford Motor Company and Volkswagen according to their website but there is no mention of Subaru.

The Metro Detroit area is rich with preproduction cars prowling the streets but it is rare to see a car that is so heavily unassociated with the Motor City. The Subaru BRZ was designed in cooperation with Toyota Motors and it is built in a Japanese Subaru plant so there is no real reason for this car to be chilling in Detroit although with the number of fleet companies who handle the media fleets in this area, perhaps the people responsible for the local Subaru media fleet dropped off this BRZ for some sort of repair work. In fine media fleet form, this BRZ was sporting Illinois manufacturer license plates so there could be some credence to the suggestion that this belongs to a fleet group who was having work done.

This is the first time that we have seen the new Subaru BRZ (or any of the Toyobaru sports coupes) on the open road and this is the first step towards seeing production models on the road for BRZ-driving hopefuls. In addition to snapping some pictures of the exterior of the BRZ – which looks so identical to the BRZ displayed at the 2012 Detroit Auto Show that it could conceivably be the same car – we received one shot of the interior through the driver’s side window. That shot shows the 6-speed manual shifter, the Subaru touch screen infotainment system and a slew of red trim found on the shifter, the emergency brake handle, the steering wheel and the seats while the rest of the interior was finished in black or very dark grey with some silver accents on the door panels, dash and center console. There is also a coiled power wire running up to a high point on the windshield, presumably connected to a navigation or radar detector but in theory, it could also be hooked to some sort of testing equipment (although we would bet on one of the first two suggestions).

We have attempted to contact the folks at Shelby Trim and should they be willing to offer any insight as to why the 2013 Subaru BRZ was in their lot. At the time that this article went live, we have not heard back but should they have any information, we will keep our readers updated. For now, all we know is that the US arrival of the sleek new Subaru BRZ sports coupe draws ever nearer with the first sighting of one of these Toyota-Subaru joint sports cars on local roads.

Check out our gallery on the right by clicking any of the thumbnails for a first look at the 2013 Subaru BRZ out in the wild on American roads, right here in the backyard of the American automakers.

John Goreham wrote on March 30, 2012 - 10:00am Permalink
What a beautiful car. It must have been hard not to walk in and ask a million questions. Ah, but to live in a state where no front plate is legal. Here in Mass. that can get your car towed or at a minumum a ticket. Thanks for sharing. Can't wait to drive one of these. "The Supra is back."
Anonymous wrote on April 1, 2012 - 12:26pm Permalink
Old news.... These things have been spotted all over the NJ/PA area for at least 3 months now. (Subaru is located in Cherry Hilly NJ)