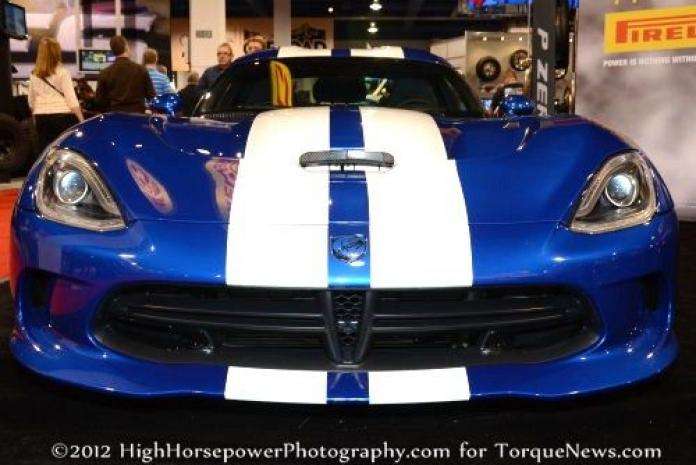 This week’s SEMA Show in Las Vegas offered tens of thousands of people a chance to get their first glimpse of the 2013 SRT Viper including a modified unit from Mopar and the unique Launch Edition model displayed by the folks at Pirelli tires.
Advertisement

We knew that the bright yellow 2013 SRT Viper modified by the folks from Mopar would be in attendance among the other Chrysler Group vehicles in the company’s massive indoor corporate display but the addition of the 2013 SRT Viper GTS Launch Edition came as a pleasant surprise to the huge SEMA Show crowd.

Located in the Pirelli tire booth, the 2013 SRT Viper GTS Launch Edition didn’t offer the aftermarket flash and flare that helps most vehicles at SEMA attract attention but this uber rare, brand new American supercar had no problem drawing gobs of attention in bone stock form. The Launch Edition 2013 Vipers will be the only models for the 2013 model year with the distinct GTS Blue paint scheme and twin white stripes so for many who attended SEMA – this could be their only chance to see one of these limited edition Vipers with only 150 being produced. If you are wondering why Pirelli featured this limited edition Viper rather than Chrysler, Pirelli developed the unique tires of the new Mopar supercar. You can click here for a closer look at the 2013 SRT Viper GTS Launch Edition.

Over in the large indoor Mopar display, the Chrysler Group brought out a 2013 SRT Viper as well but unlike the Pirelli booth that called upon the premium Viper GTS Launch Edition, the Moparized Viper in the Chrysler display was built around the “base” Viper with modifications from the company’s in-house Mopar Performance division. Best of all, the majority of the items added to the bright yellow Viper in the Mopar display are currently available in the company’s aftermarket parts catalog while the others – currently listed as prototype items – could arrive in the Mopar catalog in the near future if there is enough interest.

On the outside, the 2013 SRT Viper from Mopar features the lightweight wheels of the Viper Track Pack painted Hyperblack and a bright red front tow hook – both of which are items that are currently available from Mopar. Across the lower portion of the front fascia, Mopar has added a set of carbon fiber dive planes to improve aerodynamics along with a carbon fiber rear spoiler out back to improve downforce. These carbon pattern goodies also add even more supercar feel to the 2013 Viper and while they are only prototype items right now; these great looking carbon fiber features could arrive in the Mopar catalog in the near future.

Finally, since you simply cannot have a Moparized supercar that doesn’t have some performance upgrades, this bright yellow 2013 SRT Viper has a carbon fiber x brace that is significantly lighter than the standard metal unit while being just as strong and a matching carbon fiber engine cover further helps to reduce weight. Mopar has also equipped this 2013 Viper with a performance spring package to improve the handling of the new SRT supercar. All of these items are currently available from Mopar…even though the 2013 SRT Viper is not yet on sale.

The gallery on the right offers a look at the Moparized 2013 SRT Viper in bright yellow including a look at the carbon fiber clad engine bay. Click any thumbnail for a closer look!